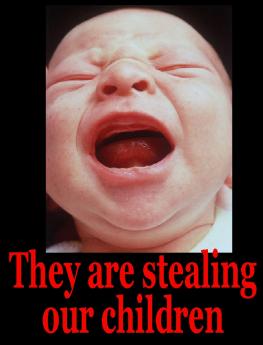 What the NeoCons (and all those in government) have wrought

Today we are becoming used to the tapes on line that show grieving relatives holding up the body parts of tiny children, killed in a war thought up by Bush and Company as a means of securing the untapped oil supplies from around the world that their Core Constituents have not managed to acquire by other means.

Human life means nothing to those in power. Divorced from human emotion in their insular and privileged world, they can look at 'populations' and determine how people can best be used to help power their policies and profit. Using the medium created through 'family law' government, and through them the same Core Constituencies, have asserted ownership of our persons and our children. Families all over the United States are struggling to fight back.

Greg and Melissa Pound live in Largo, Florida in a four bedroom, two bath house. Their children used to live with them; no more. The Pound's children were happy and healthy before DCF entered their lives. On a day more than two years ago now an accident took place. It could have happened to any of us. That accident was reported in an article written by Robert Hurt, a local man who has become involved in their cause.

Greg's sister Diane had come to visit and brought her white German Shepherd-like dog. They kept the dog outside, but Diane brought the dog inside to escape the rain. Greg had taken the 3 older children with him to run some errands. Melissa had lain their two-week baby on their large bed, left the room, and closed the door behind her. Greg's sister went into the bedroom a few minutes later to check on the baby, then left the bedroom, leaving the door ajar. A few minutes later Melissa went into the living room and found the baby lying on the rug, with the dog lying in front of the baby. The baby was not crying."

The baby had not been attacked; the dog was evidently trying to protect it but in carrying it had left teeth marks on the baby's head. Horrified, the mother called the paramedics, something that any of us might have done. But in this case and in increasing numbers of cases across the country, what plays out is a clever means for converting a cost center, social services, in this case DCF, into a profit generator.

American children and their families are being converted into cash. The means used by the ugly combination of government and corporate (corporament) interests is called by various names across the country, but in Pinellas County, Florida, the violations of America's original vision for the autonomy of individuals comes from the Department of Children and Family (DCF), with such as the Pinellas County Sheriff's Deputies, helping the Pinellas Court there converting the DCF into a profit center that steals, maims and kills.

The Pounds have struggled for over two years to get their children back. They are not alone. All over the country parents are fighting a war that gets as little publicity as the one being waged on returning American service people, the war on the environment and the war on our right to free and open elections. This goes to the principle of war that says you should divide the potential opposition and make it impossible for them to unite and fight back.

The children taken from homes ring the cash register for such as Tom Delay, who was an early investor in "foster homes" in Texas. Children from such homes can disappear, never to be seen again. The lucky ones are sold to adopting families who really want them. The fate of others we may never know. How the money is generated is efficient and clever.

Foster children are scheduled for appointments with physicians and other professionals who file paperwork to be paid while the services are never rendered. Children in foster care experience increasing health problems. Greg and Melissa's kids, healthy when they were taken, supposedly taken to doctors 70 times now suffer from neglect, ringworms, lice, and numerous other complaints.

The kids in Iraq and Lebanon died quickly, for the most part. Our children are dying slowly. Those that survive will come out of a shattering childhood largely uneducated. Their likely career path will be into a militry that will then be dependent on the draft, now beginning, or into the criminal justice system, which is itself yet another profit generator for Corporament. Some will escape, through change, sheer ability, or luck. Most will not.

Tomorrow, September 7th, the Pounds will be back in court struggling to keep their parental rights intact. Representing themselves, they will most likely lose that battle as well.

Fascism is the merger of corporate interests with government. We can thank the NeoCons for the latest incarnation of that system here in America, but for the appetite and habits that grew it to its present size we can thank both major political parties. The NeoCons optimized the efficiency of the system; liberals birthed it with the best of intentions. If one of them had done the right thing with the power and resources with which both were entrusted today our families would not be at risk and the world would not hate us.

The road to Hell is paved with good intentions; greed just paints the line down the middle.

We need to understand the full extent of the problems, see the common strategy that optimizes the profits and control for the Corporament, and take the necessary steps to return to America's original mission statement, never yet realized.

The mistake took place at the time the US Constitution was written and ratified. The Founders did not have a right to compromise on the very simple guidelines laid out. Those were:

"We hold these truths to be self-evident, that all men are created equal, that they are endowed by their Creator with certain unalienable Rights, that among these are Life, Liberty and the pursuit of Happiness. — That to secure these rights, Governments are instituted among Men, deriving their just powers from the consent of the governed..."

Personally, I hereby withdraw consent. These people are not acting for me, not in Pinella, Florida and not in Iraq. Now, how to build out an alternative infrastructure.

Many Americans have confronted problems and accomplished amazing things in the face of untenable conditions. Government, the tool that does not work, has many alternatives.

The Children's Aid Society was founded in 1853 by Charles Loring Brace and a group of social reformers at a time when orphan asylums and almshouses were the only "social services" available for poor and homeless children.

It worked. Today Corporament would make sure it did not happen. The Corporament assets that families, and children, belong to them. That needs to be changed.

Family law can be moved back into the control of individuals. By doing so most of the problems will be solved and the costs drastically reduced for all of us. Many good, decent people are moving in that direction spontaneously. One of those people is a Catholic law professor, the father of seven, who believes in what he calls True Marriage.

Stephen Safranek believes in his mission, which is to return control of marriage to those marrying. That is one of the battles that must be fought.

The bottom line is individuals deciding for themselves, taking the responsibility and being accountable. That was the original Mission Statement.

We need to do this for children here, children in Iraq and Lebanon, and children yet unborn who will come into this world to suffer only death if we delay.

The Pounds in Florida and other families across the country are ready to take action. David Griscom in New Mexico is fighting for clean elections as is Sophie di Vries in California. Stephen Safranek is fighting for our rights through the courts. Soon, Americans will be fighting a draft that will take their children to fight corporamental wars across the globe.

Instead of ghettoizing the arenas where each of us is fighting to retain or restore a small part of our inherent rights, we need to come together; know what is happening and why so that everyone we talk to can see and understand the larger picture.

Anyone fighting the Corporament is fighting for all of us.

Are you ready? Together, we can do anything. Time to reboot starting where ever you are today.

Stephen Safranek will be a guest on the Spiritual Politician this coming Friday at 7pm, EDT. Access the show through BBSradio.com.