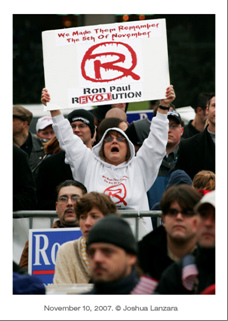 Fergus Cullen, chairman of the New Hampshire Republican Party, issued a press release this afternoon about Fox News' presidential candidates forum scheduled for January 6.  His release is below.

We thank Mr. Cullen for his statement today and for his efforts with Fox News.

“Limiting the number of candidates who are invited to participate in debates is not consistent with the tradition of the first in the nation primary.  The level playing field requires that all candidates be given an equal opportunity to participate – not just a select few determined by the media prior to any votes being cast.”

“Therefore, the New Hampshire Republican Party calls upon all media organizations planning pre-primary debates or forums for both parties to include all recognized major candidates in their events.”

“The New Hampshire Republican Party has notified FOX News of our position, and we are in ongoing discussions with FOX News about having as many candidates as possible participate in the forum scheduled for January 6.”

NO!! Paul has a prior commitment you will love: the Liberty Forum in pretty Nashua, 11 miles away. Ron Paul will get to meet Peymon Mottayedeh, who is quite a character, full of joy and life.
The debate is the day before and Ron Paul WILL be there and will be televised.
All is good. Find out the truth here and share it.