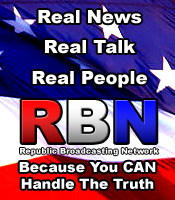 In the first hour of the show, Dave will interview highly acclaimed author, lecturer and talk show guest, G. Edward Griffin (author of the best selling book, The Creature from Jekyll Island) about the causes (e.g., The Federal Reserve) of the present economic calamity and what likely lies in America’s immediate future.

Obviously, the “main stream” media are hard of hearing and seeing. About 2 million mad-as-hell taxpayers assembling in Washington , D.C. for the largest-ever (most well-behaved ever, most respectful ever) protest did not make it onto their radar screens (or our TV screens). When the massive protests finally did receive scant attention, these average, everyday Americans were met with insults and derisive comments from the “Lame Street Media” in an obvious attempt to obscure the depth of America ’s anger. In that spirit and in the second hour of the show, Dave will interview the creator of OperationCanYouHearUsNow.com as they will discuss the recent protest movement leveled by tens of thousands of average Americans against the yellow journalistic media consisting of NBC, CBS, ABC and CNN

Are Automakers Are Coming For Your AM/FM Radio?