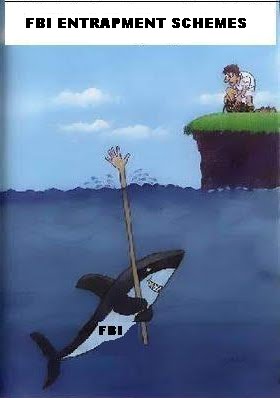 Farooque Ahmed: Entrapped by an FBI Sting - by Stephen Lendman

Though too early to conclude guilt or innocence, what's so far known is worrisome, involving an FBI sting to entrap. Based on numerous previous cases, without exception, innocent men and occasionally women have been targeted, evidence later showing no plot and no crime. Yet suspects are arrested, charged, tried, and convicted by manipulated/intimidated juries, right-wing judges sentencing them to long prison terms.

Since America declared war on Islam post-9/11, Muslims have been the target of choice. As a result, hundreds have been wrongfully incarcerated, guilty only of practicing Islam in America at the wrong time. So far, Ahmed's case has all the earmarks of another man, victimized for political advantage.

On October 27, a Department of Justice press release headlined, "Virginia Man Arrested for Plotting Attacks on DC-Area Metro Stations with People He Believed to Be al Qaeda Members," saying:

"Today's case underscores the need for continued vigilance against terrorist threats and demonstrates how the government can neutralize such threats before they come to fruition."

The DOJ accused Ahmed "of plotting with individuals he believed were terrorists to bomb our transit system, but a coordinated law enforcement and intelligence effort was able to thwart his plans....Today's arrest highlights the terrorism threat that exists in Northern Virginia and our ability to find those seeking to harm US citizens and neutralize them before they can act."

It stated that from about April 18 - October 25, 2010, Ahmed plotted with believed Al Qaeda operatives to cause "mass casualties" in Washington DC Metrorail stations through "multiple bombings."

It mentions a visit to a Dulles, VA hotel to meet with "a courier he believed to be affiliated with a terrorist organization who provided Ahmed with a document which provided potential locations for future meetings."

Subsequent ones at other locations followed, during which the DOJ alleged that "he might be ready to travel overseas to conduct jihad in January 2011 after a Hajj Saudi Arabia pilgrimage in November."

Other allegations included a willingness to photograph the Arlington Cemetery Metrorail station and a DC hotel "to obtain information about their security and busiest periods." Other alleged surveillance followed, subsequent meetings as well, including to get "suggestions as to where explosives should be placed on trains" for simultaneous attacks. Email communications were also mentioned.

Alleged is that Ahmed "did knowingly and unlawfully surveil, photograph, videotape, diagram, and otherwise collect information with the intent to plan or assist in planning" the above listed attacks.

Alleged is that he "did knowingly and unlawfully attempt" to do it.

On October 27, a grand jury indicted him on all counts. Born in Lahore, Pakistan, Ahmed came to America in 1993 and became a citizen in 2005. He worshipped at the All Dulles Area Muslim Society, known to be very mainstream. If convicted on all charges, he faces up to 50 years in prison with little chance for parole. At age 34, it's perhaps a life sentence.

Disingenuously, DOJ's press release ended saying, "Indictments are only charges and not evidence of guilt. A defendant is presumed to be innocent until and unless proven guilty."

Rest assured, Ahmed's fate is sealed with or without proof. His indictment, as in similar cases, provides none, only circumstantial claims couched in inflammatory rhetoric to be highlighted at trial and already in major media reports. In addition, no mention of a sting is explained - the fact that paid FBI informants arranged everything, entrapping Ahmed in an alleged plot, one he might never have planned on his own. Moreover, he perhaps didn't realize the potential implications of whatever meetings and discussions he had. No matter. It's too late, another testimony to US injustice.

Ahmed was "accused of trying to help men he believed to be militants plot bombings at Washington-area subway stations, the Justice Department announced." Cited were unnamed FBI officials "confirm(ing) that Mr. Ahmed's contacts had been FBI agents who were part of a sting operation," without saying his entrapment perhaps involved an alleged plot he might otherwise not have planned. Omitted also is his side of the story, likely very different from DOJ's.

Besides allegedly planning Metro attacks, he "wanted to battle US troops in Afghanistan and Pakistan, and trained himself to fight, authorities alleged Thursday." Again no proof, only what paid FBI informants claimed.

He was "reserved." Living next door, Barbi Shires "said she was stunned to learn that he was suspected by federal officials in the alleged plot." She also called him "a very nice gentleman."

Referring to Ahmed and his wife, Sahar Mirza-Ahmed, she said: "They were very nice. Every time we would see them, we sp(oke)."

Another neighbor, Jay Britton, called him "Definitely not social," but had rarely encountered him in the past year. According to Shaya Fitzgerald, "He seemed like a loner."

Ahmed has a BS degree in computer science from City University of New York. He moved to Virginia from Staten Island to work for Ericsson, a telecommunications company. Online with Aspen University, he was pursuing a masters degree in risk management and data security.

On October 28, Findlaw said he asked to be provided an attorney the previous day. "In cases like this," it explained, "where a sting operation is in place and the alleged plan has yet to be carried out, questions of intent and entrapment are often raised as defenses."

Ahmed's lawyer can and should question the legitimacy of charges, demanding proof, not allegations from FBI informants paid to provide what DOJ prosecutors want to hear. Can real intent be proved? Did Ahmed buy or make explosives? Did he actually wish to bomb DC Metro stations and fight Americans in Afghanistan and Pakistan, or did idle, egged on, talk alone take place? Was he, in fact, entrapped in what he never would have planned on his own?

So far, indications strongly suggest it. Proving it against skilled prosecutors is another matter, especially using a court-appointed attorney with a case load too full to devote enough time and resources to his client. As a result, Ahmed's task ahead is all uphill, a very steep one.

Remember past ones, including a fake shoe bomber, a fake underwear bomber, a fake Times Square bomber, an earlier fake one there, still another by a fake Al Qaeda woman, fake 9/11 bombers, and others in a fake democracy with fake elections and fake public servants. Some system!

Involved are "two suspicious packages bound for the United States - specifically, two places of Jewish worship in Chicago." Found in Dubai and Britain, "An initial examination of those packages has determined that they do apparently contain explosive material."

Assuring viewers of the Department of Homeland Security's (DHS) readiness, he stressed that "additional protective measures (will be pursued) for as long as it takes to ensure the safety and security of our citizens."

He said packages originated from Yemen, Al Qaeda operatives based there. They "plan attacks against our homeland, our citizens, and our friends and allies....The events of the past 24 hours underscore the necessity of remaining vigilant against terrorism....As we obtain more information, we will keep the public fully informed (at strategically timed moments, of course)....And the American people should be confident that we will not waver in our resolve to defeat Al Qaeda and its affiliates and to root out violent extremism in all its forms."

The major media, of course, are all over this story, including an October 29 New York Times Scott Shane report headlined, "US Hunts for More Suspicious Packages," without suggesting perhaps that this alleged bomb attack is fake, like all the others. Instead, in lockstep with Washington, Shane noted that:

Alleged "explosives" were "packed in toner cartridges (inside laser printers), based on a tip from (unnamed) Saudi intelligence officials." They were clearly tampered with, visible wires sticking out of them, running to external circuit boards with white powder dust on top.

"Discovery" triggered a terrorist alert "that included scrambling fighter jets to accompany a passenger flight as it landed safely in New York."

In addition, at Newark and Philadelphia airports, arriving cargo planes were moved to secure areas for inspections. A Brooklyn UPS truck was also stopped and searched. Nothing was found. Neither perhaps in alleged Yemeni originated ink cartridges, especially ones so inexpertly assembled.

Obama's press conference was brief and uninformative. A longer one followed, conducted by press secretary Robert Gibbs and Deputy National Security Advisor for Homeland Security John Brennan, "rais(ing) more questions than (they) answered," according to one analyst.

Providing no proof of any plot or why alleged US-based "terrorists" need crude overseas shipments for one, they claimed two packages (one from Fedex, the other from UPS), aboard US-bound cargo planes, contained trace amounts of explosives, both originating from Yemen, Muslims again the bad guys. Whether homegrown or abroad is irrelevant when those cited are invented, even nameless.

Villains, however, are the same. So are motives - to incite fear; maintain public support for imperial wars, outsized military budgets, repressive laws, harsh domestic crackdowns, and whatever other initiatives Washington undertakes, especially if claimed for national security.

No matter that America is now a police state, waging permanent wars for unattainable peace because new adversaries replace old ones. The cycle never ends. Intimidated/distracted people never catch on. As a result, lawless policies continue, the public, of course, the loser, mindless of how they're betrayed, never served. It's truer today than ever under both major parties, beholden to privilege, not vital popular interests.

1 Comments in Response to Farooque Ahmed: Entrapped by an FBI Sting

I see that Lendman hates the U.S. almost as much as he hates Israel. Hence every attempt by either country to defend itself against the horrible scourge of resurgent Islam is taken as a talking point to try to delegitimize it.  Yes, the feds ran a sting on poor Farooq Ahmed. Too bad, he did more than just become an unwilling dupe:

"Ahmed said he was willing to be a martyr and hoped to participate in jihad in Afghanistan or Pakistan in January, 2011. But first he wanted to attend the Hajj, a religious pilgrimage to the holy city of Mecca, Saudi Arabia.

“Ahmed told both Operative-1 and Operative-2 he was attending Hajj this year and that they should all go in order to complete the five pillars of Islam before making the ’top mark’ — by which I believe Ahmed meant ’becoming a martyr’.”

Keep up on daily world news of the Hairy Muslims at http://tinyurl.com/islamwatch