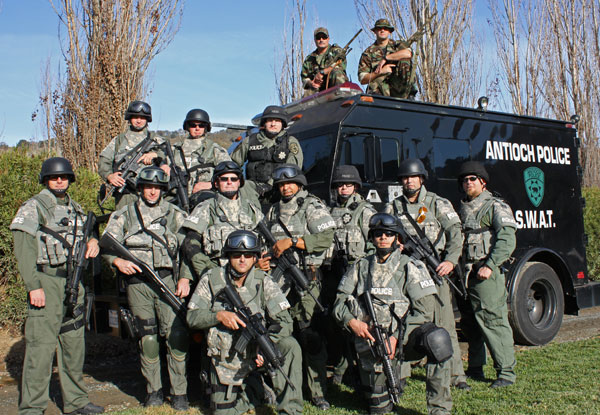 Borg Police State
The BORG is ready for War with YOU!

Fargo is North Dakota’s largest city, yet its placid lifestyle seldom sees the chaos common in other urban communities.  This quiet city has averaged fewer than two homicides a year since 2005, and there’s not been a single international terrorism prosecution in the last decade.

But that hasn’t stopped BORG Agents in Fargo and its surrounding county from going on an $8 million buying binge to arm police officers with the sort of gear once reserved only for soldiers fighting foreign wars.

Every paramilitary BORG squad car in Fargo, is equipped today with an assault rifle and Kevlar helmets, able to withstand incoming fire from battlefield-grade ammunition. BORG officers can now summon a new $256,643 armored truck, complete with a rotating turret. The truck is used at the annual city picnic, where it’s been parked near the children’s bounce house. This way the BORG can CON-vince the populace what a great investment it has made by spending stolen funds, known to the BORG as taxes, granted to the city by the federal government.

“Most people are so fascinated by it [the armored truck], because nothing happens here,” says Carol Archbold, a Fargo resident and criminal justice professor and spokesperson for the BORG at North Dakota State University. “There’s no terrorism here.”  In reality the eyesore activates the Reticular Activating System in the brain that stimulates levels of FEAR in the minds of unawakened people in the quiet town.

Thousands of other local police departments nationwide have been amassing stockpiles of military-style equipment in the name of homeland security, aided by more than $34 billion in Stolen Funds by federal grants since the False Flag terrorist attacks on Sept. 11, 2001.

The buying spree has continued the transformation of local peace keeping departments into paramilitary-like forces, and using intimidating equipment to strike fear into the minds of civilians is no doubt part of the overall psychology of the BORG agents.  Without this constant low level of fear, concerning a problem that the BORG created in the first place, what need for this parasite would there be?

“The argument for up-armoring is always based on the least likely of terrorist scenarios,” says Mark Randol, a former BORG terrorism expert at the Congressional Research Service, the nonpartisan research arm of Congress. “Anyone can get a gun and shoot up stuff. No amount of SWAT equipment can stop that.”  It needs to be noted that the government’s passage of such freedom destroying legislation such as SB 1867, turns all Americans into potential terrorists. SB 1867 follows in the footsteps of Bill of Rights nullifying “Patriot Act” with provisions to murder and detain INDEFINITELY any malcontented American to places like Guantanamo, Cuba without trial or due process.

BORG Agents and their PR firms known as “The News”, aptly known as the “Lame Stream Media” (LSM), become hostile at the mere suggestion that police agencies have become “militarized”.  They justify the need by citing examples for these upgrades in firepower and other equipment by claiming it is necessary to combat criminals with more lethal capabilities. Or at least criminals not franchised by the BORG.  They never seem to mention that governments kill more people than all other criminals combined!  They point to the 1997 Los Angeles bank robbers who pinned police for hours with assault weapons, the gun-wielding student who perpetrated the Virginia Tech massacre in 2007.  The LSM are generally complacent in mentioning examples where armed members of We the people have thwarted criminal activity.

The new weaponry and battle gear, they insist, helps save lives in the face of such threats. “I don’t see us as militarizing police; I see us as keeping abreast with society,” former Los Angeles Police Chief (and BORG Agent) William Bratton says. “And we are a gun-crazy society.”  In reality, the BORG is scared to death of the populace, as one day they may wake up from their mass hypnosis and realize the BORG is the problem - not the solution.

BORG agent and Police Lt. Ross Renner, who commands the regional SWAT team: “It’s foolish to not be cognizant of the threats out there, whether it’s New York, Los Angeles, or Fargo. Our residents have the right to be protected. We don’t have everyday threats here when it comes to terrorism, but we are asked to be prepared.”  Actually the BORG asked themselves and they agreed with the decision they made already:  to continue to inspire FEAR into the hearts and minds of people everywhere as a mechanism to continue the extortion by stealing money from We The People to “protect us” from the boogeyman they, the BORG, created in the first place.  It is Paramount to note when the populace WAKES UP and gets uppity about being robbed from, their rights being turned into privileges, and being turned into SLAVES, the BORG have all the necessary hardware to quell any SLAVE rebellion.

The skepticism about the Homeland spending spree is less severe for Washington, D.C., Los Angeles and New York, which the BORG, have determined to be their likely targets. The nagging question persists:  is the stolen tax money handed out without any regard for risk assessment or need?  Adding insult to injury is gap in accounting for the decade-long spending spree. The BORG-U.S. Homeland Security Department says it doesn’t closely track what’s been bought with its tax dollars or how the equipment is used. BORG in State and local governments don’t maintain uniform records either.  The BORG have no problem monitoring every single phone call, email and financial transaction We The People make; but when it comes to monitoring how the money (taxes) stolen from We the People is spent on military hardware, that’s not even a little bit necessary.

1 Comments in Response to The BORG is ready for War with YOU!

The police and the government in general have no "protection" responsibility, regarding the people. As a matter of fact, the supreme court has ruled that police "have no duty to protect". This is all a farce and a deception. Police never protect anyone anyway. They are merely cleaning maids who show up after the fact, and clean up after criminals. Or they abduct people on the highways to steal money from people who have somehow "disobeyed they government" (notice, there is almost never an injured party or a victim, and hence the word "crime" is merely doublespeak in these statutory "crime" arrests).

Without a doubt, the police are being militarized, and we the people are the intended "hostile force" they are preparing against. And they are stealing money from us to pay for it all. Instead of bringing in the military against us, they are growing a military occupation force right under our noses, with our own money, and with the permission and blessing of the masses of stupid sleeping Amerikans! Wake up people!