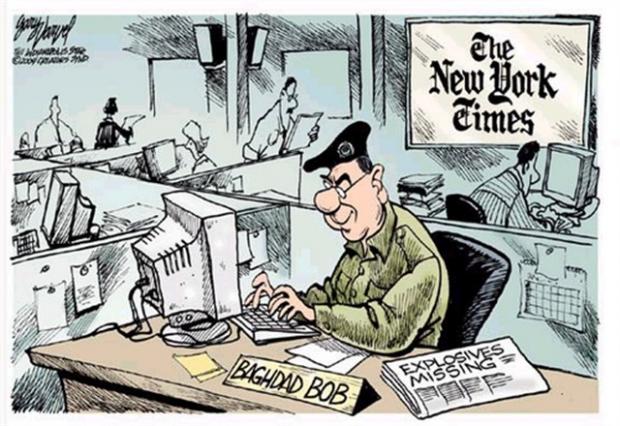 On April 24, a glaring example was published. The Times shares responsibility with David Horowitz's Freedom Center. With apologies to Alan Jay Lerner, his racist ad could make sailors blush.

College professors were also targeted for "us(ing) literature in classes to attack Israel." They endorse BDS. Their names were listed for added emphasis. The ad called for "publicly sham(ing) and condemn(ing them) for the crimes their hatred incites."

It's "time for supporters of the Boycott, Divestment and Sanctions movement (BDS) to ask themselves what they did to contribute to the atmosphere of hate that spawned" the killing of Jews.

"The Holocaust," it said, "began with boycotts of Jewish stores and ended with death camps. The calls for a new Holocaust can be heard throughout the Middle East and Europe as well."

Horowitz is a notorious Islamophobe. Fairness and Accuracy in Reporting (FAIR) top-featured him in its "Dirty Dozen" Islamophobia list. It called him its "premier promoter." He made himself its "chief publicist."

He's also editor and owner of FrontPage Magazine. It features racist hate and Islamophobia. It calls Occupy Wall Street "the Communist movement reborn." It said planned May Day activities include "terrorism." They intend "violent acts (to) disrupt the US economy."

Its Jihad Watch page might make some racists blush. It's that bad. It's Wall of Truth page runs neck and neck. It calls Brandeis University students for Palestine "stormtroopers." It labels supportive Florida Atlantic University ones "blood libels (and) Israel-hating."

Anything Horowitz writes or says tops everything. His David's Blog is hate-filled. It calls "racial outrage over the tragic death of Trayvon Martin....a national disgrace."

It includes comments like "Muslim countries have no tolerance for others. If you're not Muslim, then they consider you to be a pig or a dog or a monkey. These backward Muslims really are still living in the stone age."

He's off the rails. He menaces free societies. He spews hate in public appearances, print, and on scoundrel TV. He participates as well as promotes. He equates Islam with terrorism. He's not fit for polite company.

The New York Times published his hate ad. Doing so violated its own "Advertising Acceptability Guidelines."

It states in part:

"The Times may decline to accept advertising that is misleading, inaccurate or fraudulent; that makes unfair competitive claims; or that fails to comply with its standards of decency and dignity."

"If an advertisement contains statements or illustrations that are not deemed acceptable, and that The Times thinks should be changed or eliminated, the advertiser will be notified."

"The Times will attempt to negotiate changes with the advertiser; however, if changes cannot be negotiated, the advertisement will be declined by The Times."

The New York Times spurned 148 US college professors. Their April 28 letter to the editor denounced Horowitz's hate ad. The Times wouldn't print it. Why needs explaining. Its full text said:

"We are professors who teach in universities across this country. We are appalled at the advertisement by the David Horowitz Freedom Center (Op-Ed page, April 24, 2012) which compares the international movement for Boycott, Divestment and Sanctions against Israel (BDS) to the Holocaust and ancient blood libels. It also asks that professors who support it be 'publicly shamed and condemned.' "

"It grossly distorts the statements of such professors, which are publicly available online and can be verified."

"The Horowitz Center's advertisement seeks to shut down informed debate. Free speech and thought was a crucial right at stake in 1930s Germany and it remains so today."

"The discussion that took place at the University of Pennsylvania did not use any objectionable language, and included many Jewish participants, including rabbis. Your readers can hear for themselves what was said at www.PennBDS.org."

"It is Horowitz who uses the language of hatred and bigotry. Even those of us who do not support BDS are alarmed at your carrying an advertisement that misinforms and names individuals who do not have the money that Horowtiz has to defend themselves through his chosen medium."

"We hope you will publish this letter to make this point."

They all signed their names. UCLA Professor David Delgado Shorter was among them. His academic freedom's at stake. His department chair rebuked him for posting content criticizing Israel.

Others included Jews. Universities nationwide were represented. They include UC Berkeley, Colombia, Yale, the University of Pennsylvania, Cornell, Duke, Swarthmore, Barnard, NYU, and University of Illinois.

Sensitive truths in America aren't tolerated. Only wealth, power, and Israeli support are welcome. Some learn the hard way. Their honor and integrity remain intact. What's more important than that.