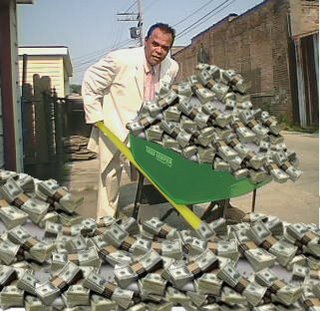 According to an ancient proverb, "Those whom the gods wish to destroy they first make mad." Perhaps it had central bankers in mind.

For most people, conditions are much worse now than earlier. Troubled European economies are cratering. Force-fed austerity crippled them. Stronger economies are faltering. Unemployment and poverty are increasing. So is public anger.

He worried for good reason. "The fallacy of monetary policy in the US is to believe this money will go to the man on the street," he said. It hasn't so far and "won't."

"It goes to the Mayfair economy of the well-to-do people and boosts asset prices of Warhols."

"It is difficult to tell what will happen. I happen to believe that eventually we will have a systemic crisis and everything will collapse."

"But the question is really between here and then. Will everything collapse with Dow Jones 20,000 or 50,000 or 10 million? Mr. Bernanke is a money printer and, believe me, if Mr. Romney wins the election, the next Fed chairman will also be a money printer."

"I think there is a huge misconception and fallacy that money printing can actually improve the rate of employment because the money flows down into the system."

"It goes first into the banking system and into financial institutions, into the pockets of well-to-do people. If you drop money into my pockets….at the same time (of wrongheaded) government involvement," economic development is stifled.

"I don't want to build a new business. But what I may do is look around the world (for) distressed assets. So I will go and buy existing assets, takeovers. But takeovers don't add to employment. They destroy employment."

"Secondly….they have been saying for the last 15 years that bailing out LTCM was necessary. Then they saw the NASDAQ collapse after March of 2000. We need to create another bubble. Print money. They created a gigantic credit bubble and the misery that we have today….Thank you, Mr. Bernanke."

Include his Maestro of Misery predecessor. His legacy reflects torment and devastation for millions. Bernanke matched his worst and exceeded him.

They're two of the most duplicitous scoundrels ever to serve in Washington. They're financial weapons of mass destruction. They engineered harder times than most people thought possible.

According to John Williams:

"At the same time, despite the ongoing nature of the economic and systemic-solvency crises, and the effects of the 2008 financial panic, income dispersion - the movement of income away from the middle towards both high - and low-level extremes - has hit a record high, instead of moderating, as might be expected during periods of financial distress."

"Extremes in income dispersion usually foreshadow financial-market and economic calamities. With the current circumstance at a record extreme, and well above levels estimated to have prevailed before the 1929 stock-market crash and the Great Depression, increasingly difficult times are likely for the next several years."

Monetary madness combined with austerity when stimulus is needed assures much worse ahead. Progressive Radio New Hour regular Jack Rasmus tells listeners what happened and warns about about what to expect.

He calls QE 3 an open-ended money grab. It's near-free money for bankers and investors at the expense of the real economy and millions growing poorer.

Claiming it's done to create jobs, help the depressed housing market, and boost economic growth is cover for grand theft.

Over 23 million Americans remain unemployed. Economic conditions are weakening. Nearly all indicators show housing "bump(ing) along the bottom." QE 3 will do nothing to change things.

It's "subsidizing banks and investors." It's boosting financial, commodity, and other asset class valuations. At the same time, it's hanging ordinary people out to dry. It provides no help whatever. It's transferring wealth to super-rich elites already with too much.

Banks and wealthy investors take free money and hoard it. Much ends up offshore in tax havens. It's used for speculation to make more of it. Fortunes have been made at the expense of the real economy and welfare of ordinary people.

Lending to small and mid-sized businesses stagnates or declines. Since 2008, multiple QE rounds, other handout policies, and zero interest rate policy (ZIRP) for banks exceeded $10 trillion in benefits for crooks instead of prosecuting and imprisoning them for previous grand theft.

America's weak growth is slowing. Europe is in recession. It's deepening. China's heading for a hard landing. So is Japan. India, Brazil, and other strong economies are softening. As Europe and America go, so goes the world. Contagion can't be contained.

Unilateral or coordinated QEs "do little to nothing to stop slowing" economies worldwide. They're heading for "synchronized global recession."

All the money and liquidity in the world can't create jobs, end the housing slump, or stimulate growth by handing it to bankers and other financial interests. All it does is enrich them more at the expense of ordinary people and real economies.

It's not rocket science. Central bankers know it. They're not stupid. They know what's needed to end economic slumps, induce recovery, and reinvigorate growth. Knowing the right thing and doing it are world's apart.

They're beholden to big monied interests. Policies adopted serve them. The world is awash in capital. It's used for the wrong purposes.

America isn't broke. Neither is Europe or Japan. Instead of using their resources responsibly, it going to their top 1%. At the same time, greater force-fed austerity is coming. America named it. It's called the "fiscal cliff."

It's cover for making rich elites richer and poorer ones deeper in the hole. Coordinated central bank money madness is part of the dirty scheme.

As a result, free money goes to banks and other financial interests. Social benefits and disposable income cuts are mandated for everyone else.

Rasmus calls it "QEs for them." "Austerity for the rest of us." Economic slowdown and recession are assured. It's baked in the cake. Policy makers mandate it.

Bipartisan complicity pledged high times for rich folks. Everyone else is on their own out of luck. Elections change nothing. They haven't for decades. They do little more than reshuffle deck chairs.

Money power rules. What it wants, it gets. It's the American way. It's no different across Europe and most other parts of the world. It's a sorrowful state. People needing help don't get it.

Half of all US households are impoverished or bordering on it. For a family of four, America's official poverty line is slightly over $23,000.

Families this size can't manage in Chicago, New York, Boston, or other large US cities and most mid-sized ones. Adjusted for real, not manipulated, inflation, they're pressured more each year.

Incomes are declining. Benefits are eroding or ending. Job creation is moribund. Most pay borderline or sub-poverty wages. In 2011, the Gini coefficient measuring social inequality grew at the fastest pace in two decades.

Average and median family income keeps dropping. The harder times get, the less able most people can cope. Candidate Obama promised change to believe in. He didn't say what kind.

Mass social duress on a global scale explains it. So does indifference to human need and suffering. Had he leveled with people he might have become another political has-been.

If reelected, it's only by default. The least worst is better than the other way around. It might not turn out that way. Anything is possible. Big money decides.

Ordinary people have no say. Under Republicans or Democrats, Tories or New Labor in Britain, or other major parties in most countries, it's no different.

Institutionalized exploitation and indifference are baked in the cake. Bad as things are expect worse. Nothing as far as the eye can see suggests otherwise.

Ordinary people are on their own sink or swim. Fighting back is their only chance for change. It won't come any other way.