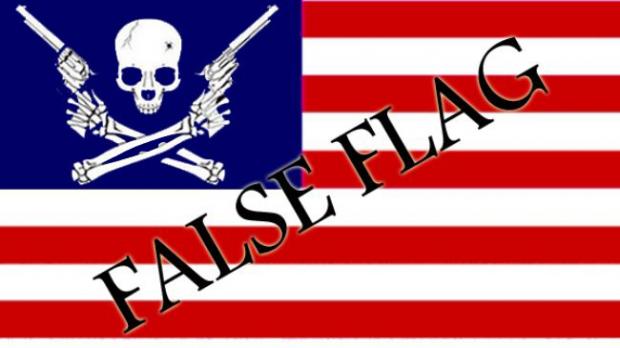 Anatomy of a False Flag

False flags are an American tradition. They go way back. The Boston bombings appear the latest. More on that below.

Notable earlier false flags or incidents approximating them include:

In 1845, America lawlessly annexed Texas. It was Mexican territory. President James Polk deployed US troops. A future president led them. General Zachary Taylor paraded them along the disputed border.

In May 1846, Polk told cabinet officials that if Mexican forces retaliated, he'd ask Congress to declare war. He wanted it whether or not Mexico attacked. After an incident occurred, Polk told Congress:

"Mexico has passed the boundary of the US and shed American blood on American soil." The Mexican War followed.

Half of Mexico was annexed. Included were California, Utah, Nevada, as well as parts of New Mexico, Arizona, Wyoming and Colorado. The Rio Grande became the Texas-Mexico border.

In 1898, Cubans neared freeing themselves from Spanish colonial rule. US President William McKinley promised to respect its sovereignty.

In January 1898, the USS Maine entered Havana harbor. Allegedly it was to protect US Consul Fitzhugh Lee and other American citizens.

In May 1915, a German U-boat sank the Lusitania. It carried US munitions for Britain. Over 100 Americans on board died. US newspapers expressed outrage. Congress authorized increasing US military forces.

In 1916, Woodrow Wilson was reelected after pledging: "He Kept Us Out of War." Straightaway he planned US involvement. The Lusitania incident and British allegations about Germany seeking to ally with Mexico to regain lost territory were used advantageously.

In April 1917, Wilson established the Committee on Public Information (CPI or Creel Committee). It operated through August 1919. Its mission was enlisting public support for war.

Undermining opposition sentiment was essential. It succeeded. He turned pacifist Americans into raging German haters. Propaganda worked as intended. Wilson got the war he wanted.

Franklin Roosevelt manipulated Japan to attack Pearl Harbor. Doing so let him wage war. He had to convince Congress and a pacifist public to go along.

In 1962, Kennedy rejected a proposed US Joint Chiefs of Staff false flag. Operation Northwoods was part of a covert anti-Castro scheme. Called Operation Mongoose, a document titled "Justification for US Military Intervention in Cuba" explained.

Plans included assassinating Cuban Americans, manufacturing fake "Communist Cuban terror" in US cities, shooting down one or more US commercial airliners, blowing up a US ship in Cuban waters, attacking Guantanamo, and blaming Castro for what happened as reason for war.

In October 1983, US forces invaded Grenada. Allegedly it was to rescue American medical students. Operation Urgent Fury's mission reflected US imperialism, Cold War politics, and replacing the leftist New Jewel Movement government with a pro-Western one.

In August 1990, Washington colluded with Kuwait's al-Sabah monarchy. Saddam Hussein was entrapped to invade. In January 1991, the Gulf War followed. Over two decades of sanctions, war, occupation, and destruction of the "cradle of civilization" followed.

The 9/11 false flag launched over a decade of imperial wars against Afghanistan, Iraq, parts of Pakistan, Libya, Syria, Palestine allied with Israel, as well as numerous proxy wars and homeland ones against Muslims, Latino immigrants and working Americans.

"….Americans and their homeland security forces are better prepared to respond to terrorism than they were a decade ago." Surveillance camera videos enabled "singl(ing) out the Tsarnaev brothers in just three days…."

We'll "learn more about their motives, their training and whether they acted alone or as part of a network." Journal editors suggested  their Chechen roots "turned to jihad."

It wasn't "the first time. The radicalization of young Muslims in the West….is by now a familiar story."

"The Tsarnnaev brothers may be an example….The 'homegrown' radical threat is really an argument for vigilance….This means surveilling foreign student groups in the US, certain immigrant communities….even mosques and other Muslim venues."

"As the week's events in Boston show, the cost of doing otherwise are too high."

Numerous op-eds reflected similar sentiments. None explained what matters most. Vital information was suppressed. Lies and distortion substituted for truth and full disclosure.

It's standard scoundrel media practice. A previous article explained. Tsarnaev brothers were patsies. They were set up. Reports falsely suggested they're Islamofascist terrorists.

Their father, Anzor, said his sons had nothing to do with the bombings. US "special services went after them because my sons are Muslims and don't have anyone in America to protect them."

"I'm sure about my children, in their purity. I don't know what happened or who did this….I fear for my son, for his life."

He feared police would kill him and claim he had a gun. Older son Tamerlan died that way. Younger son Dzhokar was shot and seriously wounded. It's unclear if he'll survive.

He added that neither son was trained or had knowledge of explosives or firearms.

Their mother, Zubeidat, told Russia Today (RT) both sons were set up. FBI operatives followed them for years. Her eldest son Tamerlan "was controlled by the FBI, like for three, five years," she said.

"They knew what (he) was doing. They knew what actions and what sites on the Internet he was (accessing). They used to come (to our) home."

"They used to talk to me. They were telling me that (Tamerlan) was really an extremist leader and that they were afraid of him."

"They told me whatever information he is getting, he gets from these extremist sites."

Asked if they had secret aspirations and dark secrets, she said "That's impossible. My sons would never keep a secret."

Russian Alpha Special Forces team veteran and vice president of its International Association, Aleksey Filatov, told RT much more is going on than meets the eye.

Everything was premeditated and planned, he said. He pointed fingers the right way. "Putting a young Chechen in those shoes was top-notch professionalism in distracting everyone from the true identity and motives of the planner."

"The executors were chosen to confuse the American public and simultaneously untie the White House's hands in a way that would justify a departure from the rhetoric of non-involvement in military action on foreign territories."

1 Comments in Response to Anatomy of a False Flag

Another pack of manure from Saudi-greased Lendman. If he calls the Boston Marathon Massacre a false flag then we can be sure it isn't because his masters told him the score while giving him his paycheck.

Here's a simple explanation of why Quran-thumpers stage jihadi attacks on innocent Americans, and how Muslim coverup artists including Pres. Obama misquote the same verses to make stooges of us: