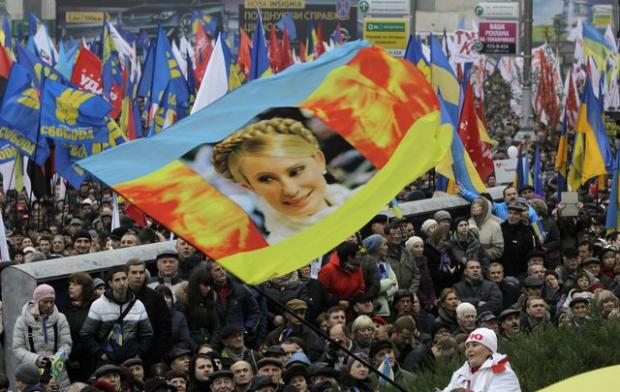 The Battle for Ukraine

It's resource rich. Zbigniew Brzezinski once said "without Ukraine, Russia ceases to be an empire, but with Ukraine suborned and then subordinated, Russia automatically becomes an empire."

Recently he said if Russia ever reunites with Ukraine, it'll be a Eurasian powerhouse. If Ukraine allies with Western Europe, Moscow will be significantly weakened geopolitically.

The battle for Ukraine continues. Its future is up for grabs. A previous article said street protests are manipulated.

Washington's dirty hands are involved. Young militants were recruited. They're street thugs. They're up to no good. They're paid to protest. Radical nationalists joined them. Ukraine's future is at stake.

"We cannot talk about the future without talking about restoring trade relations with Russia." He stressed a "future treaty on strategic partnership."

Does he or does he not mean a Customs Union? Agreeing to one rules out an EU alliance. It's one or the other, not both.

At the same time, he repeated what he said earlier. He favors European integration. On December 10, Voice of Russia (VOR) headlined "Yanukovych approves plan to sign Ukraine-EU agreement in March 2014."

Former Ukrainian President Leonid Kravchuk announced it. So did Yanukovych. He did so after meeting with three former Ukrainian presidents - Kravchuk, Leonid Kuchma, and Viktor Yushchenko.

"We have sent the government a task to speed up this work," said Yanukovych.

"As soon as we reach an understanding and such a compromise is achieved, it will be signed."

"I have said repeatedly that since 1997, the program of the Party of Regions has had the integration of Ukraine into European space as a strategic objective."

"Our purpose is very simple. We want to get conditions that will satisfy Ukraine, Ukrainian commodity producers, and the people of Ukraine now."

"These questions will only be answered when we conduct these negotiations, when we tell each other the truth."

"If the conditions don't satisfy us, we will demand changes. We will defend our interests. We need to minimize the risks for our economy."

"If we find understanding and if such compromises are reached, the signature will be put" on paper.

What Yanukovych hopes to gain is one thing. What EU countries intend to give is another.

So far, it's been all sticks and no carrots. Harsh structural adjustments are demanded.

IMF debt entrapment is planned. So are harsh mandates no country should accept.

Washington wants it increasingly isolated. It's surrounded by US bases. It's targeted by offensive missile systems. They're falsely called defensive ones.

He'll do so "without interfering in the work of judges." It doesn't mean outstanding charges will be dropped.

Western-instigated radical elements call for revolution. Ukraine's sovereignty is at stake. It's been through this before.

Promises made were broken. Exploitation followed. Once deceived should be enough. Good sense demands avoiding a repeat. Conditions continue very much in flux.

It said protesters were destabilizing the country. It urged Western countries to "stop mounting external pressure on the politics of a country that is brotherly to us."

Imagine how long it would take before they were arrested, roughed up, detained, then expelled. Imagine Western broadsheet headlines denouncing their interference.

They endorse imperial wars. They back abhorrent political repression. They do so when America or its allies commit it.

They blame Ukraine's government for deploying police against disruptive protesters.

In 2011 and 2012, they largely turned a blind eye to cops assaulting nonviolent Occupy Wall Street demonstrators across America. Police brutality was vicious.

US Secretary of State for European and Eurasian Affairs Victoria Nuland lawlessly interfered in Ukraine's internal affairs. She's been in Kiev for days.

She met publicly with opposition leaders. So did EU officials. She and they joined street protesters. It bears repeating. Imagine if Russian, Chinese or other foreign officials acted in similar fashion in Washington.

John Kerry is an unindicted war criminal. His Senate tenure was disgraceful. He's going all out to become Washington's worst ever Secretary of State.

On December 10, he issued a statement on Ukraine. It reflected imperial arrogance writ large. He lied saying:

"The United States expresses its disgust with the decision of Ukrainian authorities to meet the peaceful protest in Kyiv's Maidan Square with riot police, bulldozers, and batons, rather than with respect for democratic rights and human dignity."

"This response is neither acceptable nor does it befit a democracy."

"(T)he United States stands with the people of Ukraine. They deserve better."

One day only, Ukrainian police overreacted. Authorities took them to task for doing so. For three weeks, they largely showed restraint. It's not easy against Western-manipulated disruptiveness.

He supports Western ruthlessness worldwide. He fronts for US global dominance plans. He stopped short of explaining.

Clashes resulted. At least 10 policemen were injured. So were several protesters. Police denied reports about beating up elderly Ukrainians in Independence Square.

"Armed confrontations between the protesters and the police go on," said VOR. "Police officers are being hit." Their protective shields, helmets and clothing "are being snatched from them."

Most approaches to central Kiev were blocked. Authorities advised Ukrainians to stay out of city center.

Protesters continued acting disruptively. They control City Hall. "There is a roadblock and metal fencing at the building's entrance," said VOR.

Several arrests were made. Police refrained from using "impact munition." They largely acted with restraint. They haven't so far evicted protesters from City Hall or the Trade Union House.

Ukraine's Interior Ministry said police are acting lawfully. They'll respond as needed to street thug-instigated disruptiveness. They'll do so within the limits of Ukrainian law.

Western propaganda is vicious. It's unrelenting. It's standard practice. It's been ongoing since street protests began.

Public sentiment is manipulated mischievously. It's done to support wrong over right. Ukrainian authorities are blamed for acting responsibly. If they don't confront street thugs, who will?

They did so with steel ropes. They smashed it with sledgehammers.  They sang Ukraine's national anthem. They hoisted Ukraine's flag  atop the empty pedestal.

Jubilant chants were heard. They shouted "Yanukovych, you'll be next." It was a staged event. It got widespread Western media coverage.

It was reminiscent of US forces toppling and destroying Saddam's Firdos Square Baghdad statue in April 2003. Doing so symbolized imperial triumph.

Fake videos and other fabricated images are commonplace. Washington uses them often. They manipulated public sentiment  against Saddam, Gaddafi and Assad. They turn truth on its head.

Other rumors claimed "special forces were being shipped in from all over Ukraine, and tanks were rumbling their way into central Kiev."

Ukrainian news outlets cited foreign reports. They showed America's Statue of Liberty and Brazil's Statue of Christ the Redeemer lit up by blue and yellow lights.

It was a hoax. RT said it was "an experiment to show how easy it (is) to manipulate public opinion." Images were "photoshopped by a Ukrainian blogger and occasional online prankster, Den Alampiev."

"I decided to see how people are consuming hoax news," he said. "It took me two minutes to make fake photos of the Statue of Liberty and the Statue of Christ."

"I wrote a short description and posted (it) on Facebook, (Russia's) Vkontakte, Twitter and LJ. In exactly 24 hours, the photo spread across the social media."

It created a false impression. It suggested widespread global support for protesters. Fake news and images work this way.

He's vilified for his anti-war advocacy. He continues going all out for resolving Syria's conflict peacefully. He's waging a lonely struggle.

Edward Lucas is The Economist's international editor. On December 10, he headlined a Wall Street Journal op-ed "How the West Lost Ukraine to Putin."

He has big aims, said Lucas. They're "audacious." His "ex-KGB regime (wants) to restore the Russian empire."

EU expanding "east was one of its greatest achievements. (T)he so-called EU-8 of Estonia, Latvia, Lithuania, Poland, the Czech Republic, Slovakia, Hungary and Slovenia represent some of the Continent's most striking success stories."

Their sovereignty was co-opted. Their populations were exploited for profit. Their economies are largely troubled.

"Their governments and people alike realized that joining the EU was the only way to do it. And nobody was (going) to stop them."

Russia "ma(de) (Yanukovych) and his country an offer they could not refuse." Details "are still unfolding."

They're polar opposite EU terms. They feature carrots, not sticks. They offer benefits America and EU nations deplore.

It "needs a geopolitical hinterland (of) economically weak and politically pliable" countries, he claimed.

He turned a blind eye to longstanding Western financial war at home and abroad. Economies are wrecked for profit. Populations are ruthlessly exploited.

America wants all countries treated the same way. So do key EU partners. They want monied interests served above all others.

Don't expect Lucas to explain. He supports their worst policies. Ukraine dodged a bullet by avoiding them. It did so provided Yanukovych doesn't accept going forward what he rejected.

Not according to Lucas. "(I)f Ukraine falls into Russia's grip," he said, "then the outlook is bleak and dangerous."

Doing so, he claimed, means "crony capitalism triumphed." Europe's "security will be endangered."

"NATO is struggling to protect the Baltic states and Poland from the integrated and increasingly impressive forces of Russia and Belarus."

"Add Ukraine to that alliance, and a headache turns into a nightmare."

Putin deplores militarism. He advocates peace, not war. He wants cooperative relations with all other countries. He doesn't seek confrontation.

NATO is a killing machine. It's a US-led imperial alliance. It seeks global expansion. It's a force for evil, not good. It threatens world peace.

Lucas calls getting tough on Russia the "best way (for) Europe or America (to) help Ukraine."

Yanukovych's best choice it turning East, not West. It's the best way to turn around Ukraine's troubled economy.

It's how best to serve all Ukrainians responsibly. Don't expect Lucas and likeminded ideologues to explain.

They endorse imperial lawlessness. They support the worst of corporate predation. Responsible advocacy opposes both.