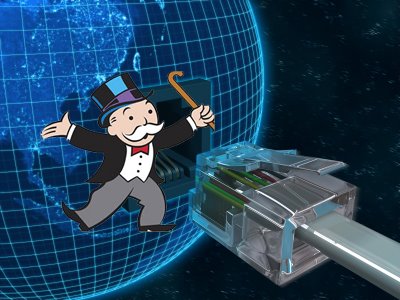 In 2008, candidate Obama pledged "(s)upport (for) the principle of network neutrality to preserve the benefits of open competition on the Internet."

He'd "take a back seat to no one," he said. He lied. He didn't surprise. He's a serial liar. He broke every major promise made.

He's targeting it for elimination altogether. His first FCC chairman Julius Genachowski was disastrous. He established an "Open Internet Rule."

It was "doomed from the start," said Free Press.net. It was "(b)uilt on a flimsy legal foundation."

It was riddled with corporate-friendly loopholes. In January, federal appeals court judges shot it down. According to Free Press Senior Director of Strategy Tim Karr:

They "stripped the agency of its ability to stop companies like AT&T, Verizon and Time Warner Cable from blocking websites and degrading Internet access."

It lets content they send reach "pay to play" users ahead of others. On May 15, FCC commissioners hold their next public meeting.

They'll vote up or down on Wheeler's rules. Free Press President and CEO Craig Aaron said the following:

"With this proposal, the FCC is aiding and abetting the largest ISPs in their efforts to destroy the open Internet."

"Giving ISPs the green light to implement pay-for-priority schemes will be a disaster for startups, nonprofits and everyday Internet users who cannot afford these unnecessary tolls."

"These users will all be pushed onto the Internet dirt road, while deep-pocketed Internet companies enjoy the benefits of the newly created fast lanes."

"This is not Net Neutrality. It's an insult to those who care about preserving the open Internet to pretend otherwise."

"The FCC had an opportunity to reverse its failures and pursue real Net Neutrality by reclassifying broadband under the law."

"Instead, in a moment of political cowardice and extreme shortsightedness, it has chosen this convoluted path that won't protect Internet users."

"This approach is almost certain to be rejected by the courts. Contrary to statements by Chairman Wheeler, the court did not invite the FCC to pursue this path."

"The court clearly told the FCC that if it wishes to ensure Internet users can send and receive information free from ISP interference, then the FCC has to classify ISPs as telecom carriers under Title II of the Communications Act."

"The FCC apparently doesn't realize the dangerous incentives these rules would create. The routing of data on the Internet is a zero-sum game. Unless there is continual congestion, no website would pay for priority treatment."

"This means the FCC's proposed rules will actually produce a strong incentive for ISPs to create congestion through artificial scarcity."

"Not only would this outcome run counter to the FCC's broader goals, it actually undermines the so-called Section 706 legal basis for these rules."

"This proposal is short-sighted and should be strenuously opposed by the broader Internet community - including millions of Americans who have urged Chairman Wheeler and his predecessors to safeguard the open Internet."

"The only parties cheering this idea on will be the largest ISPs that stand to profit from discrimination. We urge Chairman Wheeler's colleagues not to support this item as currently drafted and to demand nothing less than real Net Neutrality."

Internet architecture lets anyone innovate. It does so without ISP permission. Wheeler's scheme plays favorites.

Pay more, get more. At the same time, weaken Net Neutrality on route to destroying it altogether.

Wheeler's scheme encourages congestion. It does so through "artificial scarcity," says Free Press.

It does it by "clamping down on the data stream and charging more per bit." Internet users deserve opposite operating rules.

"Under Wheeler's scheme, there is no motivation for ISPs to deliver the next-generation Internet." He lied claiming it protects Net Neutrality.

Nor can most web companies. Wheeler rules make ISPs "gatekeepers to their subscribers." On April 24, an FCC statement lied, saying:

Proposed new rules won't let ISPs "act in a commercially unreasonable manner to harm the Internet, including favoring the traffic from an affiliated entity."

At the same time, ISPs will decide how "commercially reasonable" will be interpreted. They'll take full advantage. Maximize profits matters most.

Once issued, people are invited to comment. Protecting Net Neutrality demands it. FCC members must respond. Much is on the line on how they rule.

Candidate Obama pledged "to tell the corporate lobbyists that their days of setting the agenda in Washington are over."

President Obama benefits enormously from millions they contribute and raise on his behalf. They host fundraisers.

They're White House favorites. They got the FCC boss they wanted. The Los Angeles Times once called Wheeler "the rock star of telecom."

He's a longtime communications industry insider. He was an Obama 2008 transition team member. He served on his Intelligence Advisory Board.

He's connected to 16 board members in 16 organizations representing 21 communications-related industries."

He's industry friendly and then some. He's opposite of what Net Neutrality advocates deserve. Consumer advocacy isn't his long suit.

His "pay to play" scheme is polar opposite his duplicitous commitment to "free and open Internet" policy.

During his June 2013 Senate confirmation hearing, he lied saying:

"If I am fortunate enough to be confirmed, my client will be the American public and I hope that I can be as effective an advocate for them as humanly possible."

His "payola Internet" policy insults "millions of people who have actively called on (FCC members) to preserve the open Internet," said Free Press.

It belies Obama's promise to do so. Free Press is blunt saying:

Obama's choice is clear. He's either "for Net Neutrality (or) Wheeler's Internet payola." No in between. No longer "for both."

On April 25, Free Press headlined "It's Time to Launch the Biggest Protest the FCC Has Ever Seen."

It lets them "discriminate against online content and applications." Wheeler "has the nerve to call this 'Net Neutrality.' "

"Stop the FCC from Breaking the Internet." Write Tom Wheeler as follows:

"The future of the open Internet is in your hands. And yet you have proposed rules that would actually break it.

Your proposed path would open the door to widespread discrimination online.

It would give Internet service providers the green light to implement pay-for-priority schemes that would be a disaster for startups, nonprofits and everyday Internet users who cannot afford these unnecessary tolls.

I urge you to scrap these proposed rules and instead restore the principle of online nondiscrimination by reclassifying broadband as a telecommunications service."

His scheme isn't the last word. He needs majority FCC agreement to prevail.

Public comment comes next. Final rules not until late summer. Most likely after November elections.

Plenty is needed to defeat Wheeler. It's his way or Net Neutrality. It's top down or bottom up control. There's no in between.