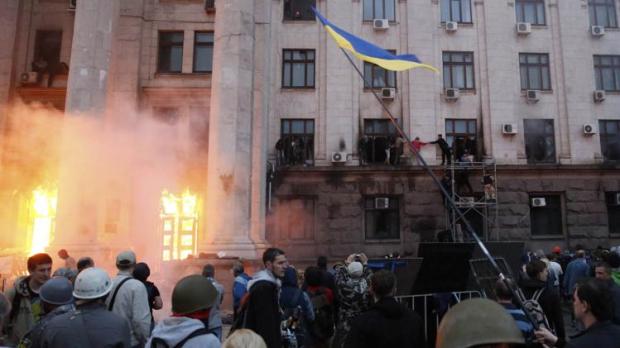 Unrestrained brutality explains it. More of the same is likely. Perhaps much worse ahead. Maybe Friday's incident was prelude for more planned slaughter.

On May 2, Itar Tass reported what happened in Odessa, saying:

"As many as 38 people died in a fire lit by Ukraine's Right Sector and self-defence radicals at the building of trade union council in the Black Sea city of Odessa on Friday, a spokesman for the Ukrainian interior ministry said."

"According to the ministry, thirty people died of carbon oxide intoxication, eight died having jumped out of windows. As many as 50 people sought medical assistance, including ten policemen."

"As a result of clashes and fire in the Trade Unions House in Odessa's Kulikovo Pole square, 42 people have died and 125 have been injured and taken to hospital. There are 21 policemen among the injured."

"Thirty-seven people were killed and some 200 injured, including 22 policemen." Over 130 suspected perpetrators were detained. Ten criminal cases were initiated."

"When we came out of the burning building, a crowd of nationalists attacked us. I can say that about a hundred people were hurt."

"People jumped out of windows. Everything was in smoke. People lying on the ground were kicked with feet."

"I and one of our activists, Vlad, have serious head injuries. We are heading for a hospital. Earlier in the day, our activist Ivan received a bullet wound."

On May 3, Itar Tass headlined "Kerry's refusal to discuss Ukraine is irresponsible approach."

Russia's Foreign Ministry said he asked to speak with Sergey Lavrov on Syria. When he knew "Russia proposed to include the Ukrainian issue, (he) postponed the talk…"

"Such an approach clearly indicates that the American colleagues are not interested to look for a way out of the explosive situation fraught with unpredictable consequences and actually play into the hands of the current leadership in Kiev."

Russia's UN envoy Vitaly Churkin expressed shock "at the placidity of Western countries over the illegitimate Kiev leadership's actions with the use of force against residents in southeastern Ukraine."

"Such an attitude of the West made Kiev sure of impunity for its actions," he added.

On May 2, Obama expressed support for violence against Eastern Ukrainian freedom fighters. He lied saying:

"(A)s as Ukrainian forces move to restore order in eastern Ukraine, it is obvious to the world that these Russian-backed groups are not peaceful protestors."

"They are heavily armed militants who are receiving significant support from Russia."

"The Ukrainian government has the right and responsibility to uphold law and order within its territory, and Russia needs to use its influence over these paramilitary groups so they disarm and stop provoking violence."

"(I)f the Russian leadership does not change course, it will face increasing costs as well as growing isolation - diplomatic and economic."

"(I)f Russia continues on its current course, we have a range of tools at our disposal, including sanctions that would target certain sectors of the Russian economy."

"(I) it continues to destabilize eastern Ukraine and disrupt this month's presidential election, we will move quickly on additional steps, including further sanctions that will impose greater costs.  But that is a choice facing the Russian leadership."

"(T)he Ukrainian government has already shown itself more than willing to work through some of the issues that would ensure that the rights of all Ukrainians are respected, that you have a representative government."

"They've shown themselves willing to discuss amendments to their constitution that devolve power to a local level."

"The Ukrainian government in Kyiv has followed through on the commitments that it made in Geneva. We need Russians to do the same."

Fact: It does so for Eastern Ukrainian brutality.

Fact: He came with orders.

Fact: He green-lighted violence on his Kiev visit following Brennan's.

Fact: They helicoptered in neo-Nazi Right Sector thugs to beat and murder them.

Fact: No evidence whatever suggests Russian involvement or backing.

Fact: The illegitimate "Ukrainian government has (no) right" to subvert law and order.

Fact: They're ordinary people. They workers fighting for their legitimate rights.

RT International interviewed Aleksei Albu. He escaped from the burning Trade Unions House. He was viciously attacked. He was brutally beaten.

"Militants from the Right Sector arrived from Kharkov to Odessa today," he said. "They attacked the center of the city first and then they moved on to the anti-Kiev protesters camp."

"The people at the camp then barricaded themselves inside the Trade Unions House."

"I was there inside the building and took part in the defense. We tried to defend ourselves as much as we could."

"When we were finally able to jump out of the window from the second floor, we were met by the Right Sector radicals."

"They beat us with their feet using bats and chains. My friend got an open head injury."

"I received a wound six centimeters long and am now in a hospital waiting to get stitches. We were all covered in blood, our legs were beaten by bats."

He was trapped on the Trade Unions House rooftop. So were about 50 others. "We tried to close all doors and windows that lead to the roof, got rid of all ladders," he said.

Right Sector thugs blocked building entrances. Police did nothing to stop them.

He was "waiting and hoping that someone (would) come here and help us get out alive."

"If police (didn't defend them) against this angry mob, then (he didn't) don't know how (he and others would) find a way to leave."

Vitaly Churkin called what happened "reminiscent of the crimes of the Nazis from whom the Ukrainian ultra-nationalists derive their ideological inspiration."

RT video footage showed "disturbing scenes of dead bodies lying around the rooms with thick smoke in the air and blood stains on the floor."

Most bodies "had St. George ribbons attached to their clothes, distinguishing them as anti-Kiev activists."

Odessa authorities declared May 3, 4 and 5 "mourning days." Flags with black ribbons were lowered to half mast.

A Russian Foreign Ministry statement was clear and unequivocal, saying:

"The tragic events in Odessa on May 2, in which, according to reports, 38 people died and 50 were injured, are viewed in Moscow as criminal irresponsibility of the Kiev leadership indulging insolent nationalist radicals, including the Right Sector, who are staging a campaign of physical terror against supporters of federalization and real constitutional changes in the Ukrainian society."

"We categorically condemn it."

"Such intention to blame Russia for everything at any cost, even at the cost of cruelly killed people, is prompted by the attempt to remove the responsibility from the Kiev leadership for what is happening in Ukraine."

One fascist regime supports another. They share guilt. They promise more of the same. People of conscience everywhere condemn it.

Thousands of Eastern Ukrainian freedom fighters are its best and bravest. They vow continued resistance.

They reject illegitimate Kiev putschists. They do so justifiably. They demand fundamental rights everyone deserves.

They merit worldwide support. They're an example for freedom lovers everywhere to follow.

Power yields nothing. Change never comes top down. Always bottom up. Sustained commitment is required to achieve it.

If societies fit to live in aren't worth fighting for, what is?

Qualified Immunity Is How the Police State Stays in Power