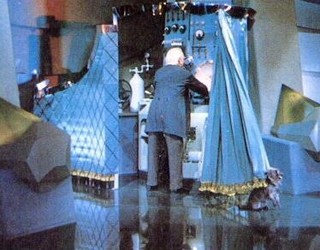 "While Ukrainian punitive squads are carrying out their operations in east Ukraine, conducting sweeps in some settlements and blocking some others, the West has actually imposed an information blockade on tragic events taking place in that country."

"It is quite illustrative that even in the Organisation for Security and Co-operation in Europe (OSCE) no one is aware that the blood is being shed in Ukraine and troops are shooting at unarmed people."

"It is symptomatic that even in OSCE circles nobody knows that blood is shed and troops are shooting at unarmed people in Ukraine."

"What freedom of speech and freedom of the press can one be speaking in such conditions?"

"We demand that the relevant institutions of OSCE and the Council of Europe immediately give an objective evaluation of the developments in Ukraine."

It effectively claims "federalization supporters had burnt themselves alive," she said.

They ludicrously say people trapped on "upper floors (hurled) Molotov incendiary cocktails at 'civilians' standing on the ground that triggered a fire that" took many of their own lives. Big Lies don't "stand any criticism," she added.

Eye-witnesses and independent journalists "have irrefutable proof that these were radicals supported and covered by current Kiev regime with full connivance of police who ousted federalisation supporters going out for a peaceful rally to the House of Trade Unions, blocked them there and set them on fire, hurling Molotov incendiary cocktails at the building." she said.

"Many videos on which radicals without hiding their faces are literally boasting of what they had done standing in front of the burning building and giving mocking comments on attempts of people happened to be in a burning trap to save themselves."

"Instead of just scrutinising available videos and finding those guilty official authorities, (Kiev) prefer(s) to devise some theories which are more fantastic than others, accusing Russia's Federal Security Service and people from (ousted Ukrainian President) Yanukovich's entourage of the tragic events."

Odessa's massacre "showed once again to residents in southern and south-eastern regions in Ukraine that the Kiev junta is not only unable to protect them from fascist actions of Right Sector radicals, but also actually rules their actions for intimidation of federalisation supporters."

"For the memory (of) those Odessa martyrs who died in the fire, we demand a thorough and unbiased investigation, the maximum harshest punishment for those guilty in this tragedy barbarous for people living in the 21st century."

"Until culprits are found and punished, any legitimacy of current authorities is out of place for residents of southern and south-eastern regions in Ukraine."

Victims were targeted, not perpetrators. They're charged with "mass disorders" as well as "threats and violence against law enforcers."

On May 4, police released 67 anti-Kiev activists. They included survivors of Friday's deadly fire. They did so after hundreds of Odessans protested.

They tried preventing released detainees from being sent to the regional court house. Earlier the Ministry accused anti-Kiev activists of setting the Trade Union House ablaze.

It remains to be seen if additional charges will be filed. Fascists give no quarter. Confronting them responsibly is important. So is spreading vital truths.

He proposed it to Sergei Lavrov. "In the many discussions I've had in the last couple of hours, I've been campaigning (for) a second meeting in Geneva to follow up on the first one," he said.

Its purpose would be "finally to make clear agreements on how we can we can put an end to this conflict and gradually move towards a political solution."

"Anything else would be irresponsible because it would only mean there are more victims," he added.

He dismissed Moscow claims of his government's involvement. He lied saying "(t)he process of dialogue had begun, only it was drowned out by the sound of shooting from automatic rifles of Russian production."

On Sunday, Putin and Germany's Merkel spoke. Focus was on Ukraine's crisis.

"The crying falsehood of the evaluation of the developments that are taking place in Ukraine these days once again speaks of the double standards typical of both the incumbent authorities in Kiev and their Western patrons."

"Today nobody recalls the previous Western incantations about the impermissibility of the use of force against so-called peaceful Maidan in Kiev when crowds of Right Sector militants beat up and burned law enforcers without any adequate response from the latter."

"Punitive operations in Slavyansk and Kramatorsk are presented as an antiterrorist effort even though a war has actually been unleashed against the Ukrainian people."

"What happened in Odessa on Friday cannot be described otherwise than barbaric, cold-blooded killing of people."

"One cannot help recalling Yugoslavia, Libya and other historical analogs. What all-Ukrainian dialogue and constitutional reform can one speak of here?"

He called is essential for Western pressure "to force the Kiev authorities to stop violence in the southeast, to bridle and disarm radical nationalists, to free detained opposition figures and members of protest movements, to return to a normal state of society."

"Unfortunately, so far the Kiev authorities are demonstrating reluctance and inability to control the situation in the country."

Western co-conspirators do nothing to challenge their lawless aggression. They're committing crimes of war and against humanity. Washington offers full support. It pressures US partners to go along.

1 Comments in Response to West Buries Truth on Ukraine