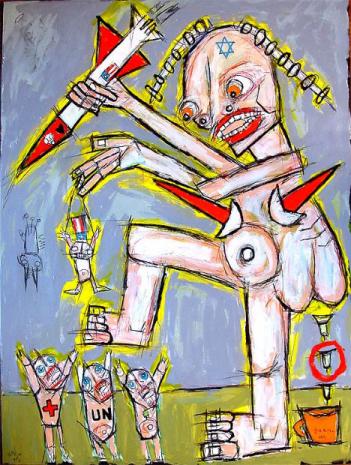 The day honors humanitarian workers killed in the line of duty.

The General Assembly designated August 19 as part of a Swedish-sponsored resolution on the Strengthening of the Coordination of Emergency Assistance of the UN.

It commemorates the day in 2003 when US terror-bombing killed then Special Representative of the Secretary-General to Iraq, Sergio Vieira, and 21 of his colleagues.

They perished in Baghdad's UN headquarters. More on World Humanitarian Day (WHD) below.

On August 19, the White House issued a hypocritical "Statement by the Principal Deputy Press Secretary on World Humanitarian Day," saying:

"Eleven years ago today, 22 humanitarian aid workers were killed in a horrific attack on the UN Headquarters in Baghdad. Their lives were cut short as they worked selflessly to save others." ?

Fact: From then until now, millions more Iraqis died.

Fact: America turned the cradle of civilization into a dystopian nightmare.

Fact: It's currently an out-of-control cauldron of violence.

Fact: Waging it has nothing to do with humanitarian intervention.

Fact: It has everything to do with regional control and the interests of Big Oil.

Fact: It's about stoking fear.

Fact: It's to make the world safe for war profiteers.

Fact: It's benefitting their bottom lines.

"Each year on August 19 we pay homage to them, their colleagues worldwide who have been killed or injured in the line of duty, and the heroic efforts of those humanitarians currently in the field."

Fact: America bears more responsibility for wars of aggression than any nation in human history.

"Today, there is an unprecedented need for humanitarians and the spirit they embody. Some 108 million people need humanitarian assistance, and more people have been displaced by conflict than at any time since World War II." ?

Fact: US wars of aggression bear most responsibility.

Fact: It's entire history is blood-drenched.

Fact: It glorifies war in the name of peace.

Fact: Obama is the latest in a long line of warrior US presidents.

"Nearly eleven million Syrians and Iraqis have fled for their lives. ?Millions need shelter, food, water, and medical care in the wake of factional fighting in the Central African Republic and a clash among South Sudan's political leaders has put millions of people at risk of famine." ?

Fact: So is Iraq for the third time since GHW Bush's January 1991 Gulf War.

Fact: America's scramble for Africa's riches is the leading cause of its turmoil.

"In these places and others - including Gaza, Somalia, Yemen, and now West Africa with the Ebola outbreak - humanitarians assume great personal risk to help those in need."

"Even as they do their utmost to help the most vulnerable, all too often humanitarians are harassed, kidnapped, or killed for their commitment." ?

"There were 251 incidents of major violence against aid workers in 30 countries in 2013. These attacks resulted in 460 aid workers killed, kidnapped, or seriously wounded; many of them heroic local staff working to help neighbors in need."

"As the world's largest humanitarian donor, the United States expresses its deepest respect to these individuals dedicated to serving others." ?

"On behalf of the American people, we are proud to support their work and humbled by their sacrifice. The world needs more of their dedication, selflessness, and courage."

Fact: America doesn't give a damn about anything humanitarian.

Fact: Nor its own citizens risking their lives to help others.

Fact: It needs governments of, by and for everyone equitably and fairly.

Fact: It needs freedom from US intervention.

Fact: It needs an end to Washington ravaging one country after another.

Fact: It needs what Franklin Roosevelt called an "economic bill of rights." It includes:

Fact: it needs putting money back in public hands where it belongs.

Fact: It needs money entirely out of politics;

America is more kleptocracy than democracy. It's too lawless and corrupt to fix.

It's criminal class is bipartisan. It partners with corporate crooks. They exploit people at home and abroad. They do so for wealth, power and privilege.

Federal, state and local authorities operate extrajudicially. Constitutional and other rule of law principles are ignored.

Anyone can be arrested, charged, prosecuted, and imprisoned for any reason or none at all. By presidential diktat, any US citizen at home or abroad can be murdered.

Others can be arrested and detained indefinitely uncharged in military prisons. Innocence is no defense.

State terrorism is official policy at home and abroad. Police states operate this way. America is by far the worst.

Challenging Washington's right to dominate globally risks persecution or death. America is unfit to live in.

It's on a fast track toward full-blown tyranny. Its human rights record is deplorable. It's by far the world's worst.

It's contemptuous of fundamental human and civil rights everyone deserves.

It's guilty of virtually every crime imaginable and then some. It ignores fundamental rule of law principles, standards and norms.

It breaches them repeatedly at home and abroad. It does so unaccountably.

It commits horrific atrocities and other human rights abuses on an unprecedented scale. No other nation approaches its unprincipled history.

None match its barbarism. None have done more harm to more people longer. None have less right to call itself democratic.

It is in name only. It rejects democratic principles at home and abroad. It demands top down unchallenged control. It does so extrajudicially.

It does it globally. It targets all independent leaders for regime change. It claims a divine right to replace them with subservient pro-Western stooges.

It wages war on its own people. It supports wealth, power and privilege. It lets monied interests run things. Duopoly power represents it.

Gangsterism reflects official US policy. Accountability is absent. Government is secretive, ruthless and lawless. It's dressed up in legal and political mumbo jumbo to appear respectable.

Checks and balances don't exist. Nor separation of powers. Nor fundamental democratic rights.

At stake is world peace, equity and justice. It's freedom or fascism. It's democracy or tyranny. It's life or death. It's humanity's survival or demise. ?

World Humanitarian Day was commemorated for the first time on August 19, 2009. Subsequent years focused on a particular theme.

This year it's the need for more humanitarian heroes. True ones giving all. Asking little or nothing in return.

Don't expect America to help. Its agenda excludes humanitarianism. Its rhetoric reflects one thing. Its policies another.

They're polar opposite. They're pure evil. They reflect state terror writ large.

They exclude social justice. They include political, economic and hot wars.

They're waged on humanity. They may end up destroying it altogether.

Washington's quest for global dominance is its greatest threat. Its hegemonic appetite is insatiable.

Its interests alone matter. Permanent wars without mercy are its option of choice. They're waged against defenseless countries.

They target America's most vulnerable at home. It bears repeating. They threaten humanity's survival.

Today's super weapons could end it in a day. Militarism is the national pastime. It's a national addiction.

The business of America is war. It may destroy its host, humanity and planet earth with it.

Super weapons make the unthinkable possible. So does the rage to use them.

Einstein once said he didn't know what WW III weapons would be used. "(B)ut World War IV would be with sticks and stones."

The lesson is clear. Either we end wars or they'll end us. Today's super weapons leave no in between.