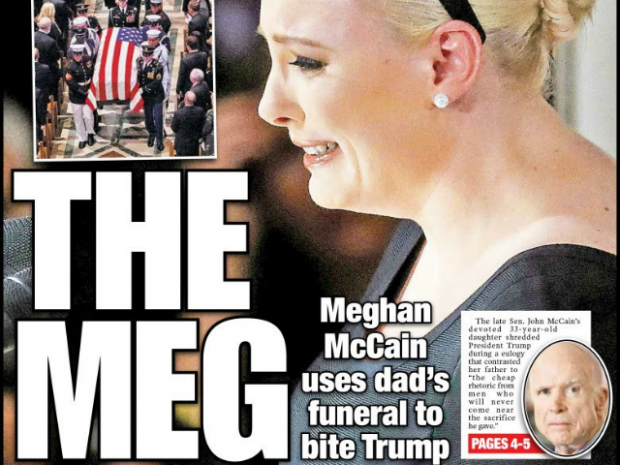 Days of eulogizing an unapologetic warmongering extremist culminated with a Saturday memorial service in Washington's National Cathedral, nauseating while it lasted.

Among others, GW Bush and Obama paid tribute to one of Washington's most despicable figures. A special place in hell awaits them.

Used as a prop, Washington's National Cathedral desecrated itself as a house of prayer for being part of the shameful spectacle.

Dick Cheney ran things for the GW Bush regime when in power, its eminence grise, calling the shots, both figures two of the nation's worst.

GW was arguably the worst ever US president, outdistancing Warren Harding for the dishonor, an "amiable incompetent," an observer called him.

GW was pure evil throughout his public life and earlier - handed the presidency he lost twice by electoral theft. The NYT ludicrously praised his "gravitas" and "statesmanship…"a leader whom the nation could follow in these difficult times."

Bush's true legacy reflects underachievement, sadism and lawlessness. He had problems with alcohol and illicit drugs.

As Texas governor, he presided over more executions than any other state executive since the Supreme Court reinstated capital punishment in 1976.

His close aids said he enjoyed killing, abusing others for his own amusement.

He was born into wealth and power, struggled completing full sentence in public remarks.

Former Texas Governor Ann Richards mocked him saying: "Poor George. He can't help it. He was born with a silver foot in his mouth."

The Bush family was connected to John D. Rockefeller, Wall Street crooks, US intelligence, and the military/industrial complex.

Obama's legacy was shameful, continuing the wrecking of America since the neoliberal 90s, accelerated post-9/11, exceeding the worst of Bush/Cheney's harshness, lawlessness, belligerency, and betrayal of the public trust.

Entering office during the 2008-09 financial crisis, Obama served monied interests exclusively, benefitted them hugely, at the expense of ordinary people he didn't give a damn about, letting hard times affecting them continue throughout his tenure.

He looted the nation's wealth for Wall Street, war-profiteers and other corporate predators. He wrecked the economy, consigning  millions to impoverishment without jobs, homes, savings, social services, or futures.

He bragged about terror-bombing seven countries, continued Bush/Cheney's imperial wars, launching his own in Libya and Syria, as well as drone war on Yemen. He supported regime change in multiple sovereign independent countries.

He presided over fantasy democracy under a homeland police state apparatus, continuing Bush/Cheney's aggression and war on social justice, compounding his predecessor's crimes with own on humanity at home and abroad.

He toughened indefinite detentions without charge, along with deploying special forces death squads in over 120 countries to kill targeted individuals, including Americans.

His "shared sacrifice" scheme was all about forcing ordinary Americans to sacrifice hugely so rich ones could become wealthier than ever at their expense.

On Saturday, he paid tribute to one of Washington's most despicable figures, shamefully calling McCain "an extraordinary man, a statesman, a patriot who embodied so much that is best in America."

Whatever was best longer ago than most people can remember vanished entirely since the Clinton co-presidency, especially post-9/11, the nation at war on humanity in its aftermath.

Bushisms were notorious while GW was in office. He stumbled with words and complete sentences when remarks he made weren't scripted.

On Saturday, he eulogized fellow war criminal McCain, disgracefully calling him a man of "courage and greatness," his life "epic," his absence "tangible…I will miss him."

Burns is a notorious imperial biographer, a deplorable figure, reinventing history his specialty, sanitizing it, portraying mass slaughter and destruction as a moral crusade.

His series titled "The Vietnam War" was a deplorable exercise in deception.

His reinvented history ignored the rape and destruction of a country, the merciless slaughter of millions, the deadly legacy of Agent Orange, the dioxin defoliant one of the deadliest substances known, minute amounts able to cause serious illnesses or death.

He shamefully praised what he called McCain's "personal dedication to truth-telling," turning truth on its head, adding his "bracing honesty and self-criticism are almost unknown in politics today."

McCain's notorious temper alienated Senate colleagues on both sides of the aisle, his high crimes well-documented.

A despicable figure throughout his public life, he remained unaccountable to the end for years of high crimes too grievous to ignore.