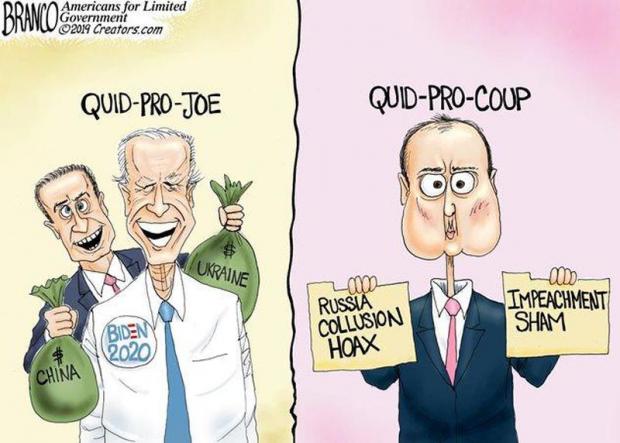 Following House Intelligence Committee witch-hunt hearings, Judiciary Committee Dems began their own on Wednesday, the circus to continue days longer in the run-up to the yearend holiday break.

Testimony by George Washington University Law School's Jonathan Turley stuck to the rule of law with plenty of hard facts backing his judgment.

The others, enlisted by undemocratic Dems, falsely claimed charges against Trump rise to the level of impeachable offenses.

Karlan said the US must keep (Obama's installed coup d'etat regime in Ukraine with a new leader strong) "so they fight the Russians there and we don't have to fight them here" — her remark sounding like a Pentagon press release about a Russian threat that doesn't exist.

According to Gerhadt's disinformation: "If what we're talking about is not impeachable, then nothing is impeachable (sic). This is precisely the misconduct that the framers created the Constitution, including impeachment, to protect against (sic)."

Ignored were Zelensky's remarks, saying: "I never talked to (Trump) from the position of a quid pro quo. That's not my thing. I don't want us to look like beggars."

He denied that he and Trump ever discussed withholding US aid to Ukraine for political favors.

The unredacted transcript of Trump's conversation with Zelensky revealed no blackmail threat, no quid pro quo, no conspiracy.

Trump should be held accountable for real offenses, not politicized invented ones because of an election he won that he was supposed to lose.

"I have spent decades writing about impeachment and presidential powers as an academic and as a legal commentator."

"Today, my only concern is the integrity and coherence of the constitutional standard and process of impeachment."

"I am concerned about lowering impeachment standards to fit a paucity of evidence and an abundance of anger."

"If the House proceeds solely on the Ukrainian allegations, this impeachment would stand out among modern impeachments as the shortest proceeding, with the thinnest evidentiary record, and the narrowest grounds ever used to impeach a president."

"The problem is not simply that the record does not contain direct evidence of the president stating a quid pro quo, as chairman Schiff has suggested."

"The problem is that the House has not bothered to subpoena the key witnesses who would have such direct knowledge. This alone sets a dangerous precedent."

"This misuse of impeachment has been plain during the Trump administration."

"Despite my disagreement with many of President Trump's policies and statements, impeachment was never intended to be used as a mid-term corrective option for a divisive or unpopular leader."

The Dems' case against Trump lacks "clear criminal act and would be the first such case in history if the House proceeds without further evidence."

Accusing Trump of bribery "is undermined by the fact that (he) released the aid (to Ukraine) without the alleged pre-conditions."

No evidence "establishes a plausible case of criminal obstruction (of justice) or a viable impeachable offense."

"There is no evidence that President Trump acted with the corrupt intent required for obstruction of justice on the record created by the House Intelligence Committee."

"If the House moves forward with this impeachment basis, it would be repeating the very same abusive tactics used against President Andrew Johnson."

"(T)he House literally manufactured a crime upon which to impeach Johnson in the Tenure in Office Act. This was a clearly unconstitutional act…"

"The obstruction allegation is also undermined by the fact that many officials opted to testify, despite the orders from the president that they should decline."

"(W)e have never impeached a president solely or even largely on the basis of a non-criminal abuse of power allegation."

"Abuses of power tend to

"(T)here needs to be clear and unequivocal proof of a quid pro quo. That is why I have been critical of how this impeachment has unfolded."

"The current record does not establish a quid pro quo…Presidents often put pressure on other countries" to serve US interests.

By that standard, virtually all Trump's predecessors should have been impeached and removed from office.

"Trump (can) point to three direct conversations on the record. His call with President Zelensky does not state a quid pro quo."

Censure is an option in lieu of impeachment, Turley explained, adding:

"I have been a long critic of censure as a part of impeachment inquiries…Censure has no constitutional foundation or significance."

Turley concluded saying: "(B)efore we cut down the trees so carefully planted by the framers, I hope you consider what you will do when the wind blows again…perhaps for a (Dem) president."

"Where will you stand then 'the laws all being flat?' "

He opposes impeaching Trump based on charges claimed by Dems with no credible evidence backing them.

On Thursday, House Speaker Pelosi instructed the Judiciary Committee to draft articles of impeachment against Trump.

Falsely claiming the "facts are uncontested," she accused him of "abus(ing) his power for his own personal political benefit at the expense of our national security" — an untrue statement based on his dealings with Ukrainian President Zelinsky.

Claiming "(o)ur democracy is what is at stake" is false. Only the illusion of democracy in America exists, the real thing absent throughout the country's history.

In her remarks, Pelosi omitted a timetable. Nor did she indicate what she wants Trump charged with.

What's going on is a politicized scam, a shameful spectacle, Dems hoping to gain a political advantage in November 2020 elections.

The gamble could backfire given plenty of ammunition Republicans can use if a Senate trial is held.