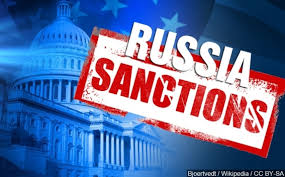 US Anti-Russia Sanctions Bill from Hell

The US wages war on sovereign independent nations it doesn't control by hot and other means.

It long ago abandoned the rule of law to advance its imperium at the expense of world peace and cooperative relations with other countries.

Notably against Russia and Iran, it's pushing the envelope dangerously toward possible unthinkable nuclear war, a doomsday scenario if launched.

With hardline extremists running things in Washington, anything is possible — even war with militarily superior Russia, its super-weapons exceeding the best in the West.

Introduced by GOP Senators Lindsey Graham and undemocratic Dem Bob Menendez, the former called the measure a sanctions bill "from hell" because of tough provisions it (illegally) imposes, Graham saying:

"If this bill becomes law, it will be the strongest statement yet by Congress that we are tired of the discord that Putin is sowing throughout the world (sic) and the threat that he poses to the neighborhood in which he resides (sic)."

A joint statement by him and Senators Menendez, Ben Cardin, Cory Gardner, and Jeanne Shaheen said the following:

The measure "significantly increases the political, diplomatic, and economic pressure on the Russian Federation in response to its malign activities around the world (sic)," adding:

It's "designed to bolster the United States' ability to confront Russian aggression (sic) by…levying wide-ranging sanctions on Russian entities and individuals" and other unacceptable/hostile actions.

"Our goal is to change the status quo and impose crushing sanctions and other measures against Putin's Russia until he ceases and desists meddling in the US electoral process (sic), halts cyber-attacks on US infrastructure (sic), removes Russia from Ukraine (sic), and ceases efforts to create chaos in Syria (sic)."

"The sanctions and other measures contained in this bill are the most hard-hitting ever imposed – and a direct result of Putin's continued desire to undermine American democracy (sic)."

It sanctions Russian banks, its oil and gas sector (internally and abroad), its cyber sector, sovereign debt, along with its officials, others outside government, and their family members because of alleged direct or indirect ties to the Kremlin.

It targets Russia's shipbuilding sector, falsely claiming the Kremlin "violates the freedom of navigation in the Kerch Strait or anywhere else in the world."

It "expedite(s) the transfer of" military related "articles" to NATO countries and creates a so-called "National Fusion Center" to respond to (nonexistent Russian) "hybrid threats."

A State Department "Office of Cyberspace and the Digital Economy" is created to counter Russia and other nations on the US target list for regime change.

A provision calls for the State Department to determine whether Russia "meets the criteria for designation as a state sponsor of terrorism (sic)."

Other related provisions are included in the measure.

Kremlin spokesman Dmitry Peskov responded to the bill, saying: "It can hardly be taken seriously."

Sergey Lavrov said if it's enacted into law, "(w)e will respond to sanctions, but in such a way that we do not harm ourselves. But we will respond for sure."

The measure "risks crippling the global energy, commodities, financial, and other markets (by targeting) almost the entire range of foreign commercial activities with Russia" — harming US European allies if enacted into law.

The White House strongly opposes the measure. Its opposition won't be good enough to counter congressional passage if by a super-majority veto-proof margin.

At this stage, the fate of the bill is undetermined. It's a reckless act, more evidence of US hostility toward Russia, upping the stakes for possible confrontation if enacted into law.

Why Russia Must Be Demonized

US War on Russia by Other Means