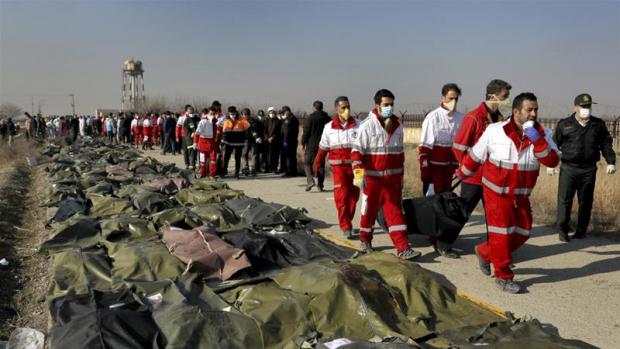 "The Islamic Republic of Iran deeply regrets this disastrous mistake. My thoughts and prayers go to all the mourning families. I offer my sincerest condolences," adding:

"The terrible catastrophe should be thoroughly investigated, and those responsible for this unforgivable mistake will definitely be identified and prosecuted."

An IRGC statement said "(f)ollowing the threats from the president and the military commanders of the criminal US that a large number of targets on the Islamic Republic of Iran's soil would be hit in case of a retaliatory operation, and considering an unprecedented increase in the aerial movements over the region, the Islamic Republic of Iran's Armed Forces were on the highest level of readiness in order to respond to possible threat," adding:

US regional military flights increased after Iran struck two US bases in Iraq in retaliation of the Trump regime's assassination of Quds Force commander General Qassem Soleimani — an act of war on the Islamic Republic.

It vowed to "pursu(e) fundamental reforms in operational processes at the armed forces level…to (avoid) repeat(ing) such errors."

Downing the Ukraine airliner was "human error," not a criminal act, because the plane's westward flight path put it close to an IRGC military site, making it appear to be hostile, defensive action taken against the potential threat.

"A sad day. Preliminary conclusions of internal investigation by Armed Forces: Human error at time of crisis caused by US adventurism led to disaster."

"Our profound regrets, apologies and condolences to our people, to the families of all victims, and to other affected nations."

Iran's Defense Minister General Amir Hatami stressed that heightened tensions will only ease "once the US ends its (hostile) occupation and presence in the region."

Fars News reported that Iraqi "resistance groups" intend responding to an attack by US warplanes on the town of Al-Qa'im, Iraq near the Syrian border.

US rage for unchallenged dominance by brute force and other hostile actions bears full responsibility for regional turmoil, heightened tensions, the threat of greater war, and the human toll affecting countless millions.

In response to the heightened risk of greater US aggression than already, the World Mental Health Coalition warned about Trump's unfitness to serve, saying:

He's "psychologically and mentally both dangerous and incapacitated," adding:

His actions are "consistent with a person who, when his falsely inflated self-image is questioned, or when his emotional need for adulation is thwarted, lashes out in an attempt to restore his sense of potency and command over others."

The world community "cannot wait any longer to deal with the dangerous situation caused by a mentally compromised person acting in erratic, reckless, impulsive, and destructive ways."

I've stressed time and again that Trump is manipulated by dark forces surrounding him. He's not the issue.

It's longstanding US dirty business as usual no matter which right wing of the country's war party is in charge.

It's been this way throughout the post-WW II era, especially since the mother of all state-sponsored 9/11 false flag attacks.

It opened the gates of hell for endless wars of aggression against invented enemies — all nations the US doesn't control on its target list for regime change.

The ultimate challenge of our time is countering what's going on to restore world peace and stability, short of greater war.

Humanity's fate depends on it.