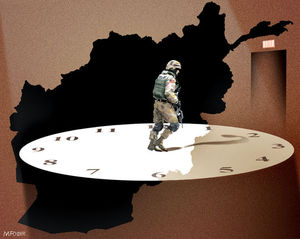 The Illusion of Restoring Peace and Stability in Afghanistan

The US came to Afghanistan to stay, the same true for all its war theaters by occupation and/or installed puppet regimes serving its interests. More on this below.

Afghanistan's troubled history goes back centuries. John Pilger explained that "no country has been abused and suffered more, and none has been helped less than Afghanistan."

If hell on earth exists, it's headquartered in Afghanistan — with many global affiliate locations in the modern era, largely because of endless US wars by hot and other means.

In the 19th century, Afghans were victimized by "great game" struggles between imperial Britain and czarist Russia — a time of endless war, destruction, occupation and human misery, continuing from then to now, notably post-9/11.

Wherever the US shows up, endless wars and mass destruction follow, the human toll of no consequence.

According to Gideon Polya, "the horrendous carnage of the (post-9/11) US War on Terror (launched in Afghanistan caused) the deaths of 32 million Muslims abroad (by violence or imposed deprivation) and the preventable deaths of 27 million Americans at home inescapably linked to the fiscal perversion of committing to a $7 trillion long-term accrual cost of killing millions of Muslims abroad."

The true cost is likely three-fold or more higher because of unaccounted for multi-trillions of dollars by the Pentagon since the 1990s.

"(S)erial war criminal (Trump warned) that "no place is beyond the reach of American might."

"The US-imposed, 4-decade Afghan Holocaust and Afghan Genocide is to continue under more draconian rules of engagement."

Since US aggression against North Korea in 1950, he estimates around 40 million preventable deaths and tens of millions of refugees.

Since WW II, the US invaded or otherwise attacked "52 countries."

"American exceptionalism means that the US is disproportionately  involved in…existential threats (to) humanity" — notably possible nuclear war that could destroy all life forms on earth.

The notion of first strike with these weapons that's stated in US National Security Strategies from Bush/Cheney to Obama to Trump should terrify everyone everywhere.

What's unthinkable is possible because of US rage to control planet earth, its resources and populations.

The so-called Trump regime/Taliban peace agreement isn't worth the paper it's written on.

Time and again throughout US history, it breached treaties, conventions, and agreements — clear proof that its ruling regimes can never be trusted.

The notion of the US agreeing to peace and an end to its occupation of Afghanistan is pure illusion.

The deal calls for reducing numbers of US and allied forces in the country in the coming months, withdrawing entirely in 14 months, including abandonment of Pentagon bases that cost billions of dollars to build and maintain.

Earlier drawdowns of US forces in the country were followed by increased deployments — troops in a so-called advisory and counterterrorism capacity.

Pentagon terror-bombing continued throughout the war.

In mid-2017, with around 8,400 US forces in Afghanistan, Trump OK'd increasing their numbers, then-US war secretary Mattis saying:

"This assures (that the Pentagon) can facilitate our missions and nimbly align our commitment to the situation on the ground (sic)," adding:

The Trump regime's Afghan strategy put no limit on the number of US forces in the country.

US policy under Bush/Cheney, Obama and Trump has nothing to do with safeguarding the Afghan people or denying terrorists a safe haven — elements the US created and supports in all its war theaters and elsewhere.

Trump's claim about "working to finally end America's longest war and bring our troops back home" awaits its moment of truth in the coming weeks and months — the illusion of ending over 18 years of war in Afghanistan likely to be dispelled.

Whether Pentagon and allied troops stay or leave, the CIA maintains a private army of paramilitaries in the country that serve US interests.

They're staying, not leaving, including ISIS, al-Qaeda, and likeminded jihadists to be deployed to the country at the discretion of Langley and the Pentagon.

Afghanistan's strategic value to the US includes its vast resources and its geographical location near Russia and China.

The US wants both countries encircled with Pentagon bases. It wants oil and gas pipelines constructed across Afghanistan.

It wants opium production continued for heroin manufacture and distribution to world markets — a key revenue source for Western banks and the CIA.

It wants control over the country continued under pro-Western puppet rule.

Restoration of peace and stability in its war theaters defeats its interests, why new millennium wars rage — threats invented to continue them endlessly.

Restoration of peace and stability to Afghanistan is likely to last no longer than an invented US pretext to breach what was agreed on.

All US wars are based on Big Lies and deception. The possibility for either of its war party wings turning a page for world peace and stability is virtually nil.

Longstanding US history shows it's a warrior nation — how its been from inception against its native people to today against humanity at home and abroad.