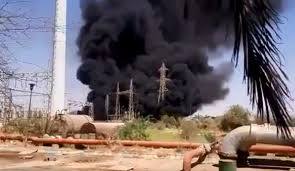 In 2020, a number of incidents with unclear causes occurred in Iran.

At the time, President Rouhani said "if we come to the conclusion that there has been foreign interference in this incident, we will respond appropriately."

The incident happened days after an explosion near Iran's Parchin military base, possible sabotage the cause.

Other explosions, fires, and incidents happened throughout 2020 — affecting nuclear, petrochemical, medical, pipeline, and power sites, along with Iranian vessels.

It's unclear if incidents were sabotage by cyber or other means, or just accidents.

The latest incident occurred on Sunday, a reported explosion at an Iranian Isfahan power plant.

According to Iran's IRNA news service, what happened was because of faulty equipment, quoting the plant's managing director, saying:

A "worn out transformer…at Isfahan's Islamabad thermal power plant exploded at around 5:00 AM (Sunday morning)."

"The damaged equipment is also being repaired and replaced."

Reportedly power was only interrupted for about two hours, the facility now operating normally.

Since its 1979 revolution, US policy toward Iran has been regime change, wanting the country transformed back to vassal state status, its vast hydrocarbon resources looted, its people exploited.

The US and Israel are waging war on Iran by other means, things turning hot by earlier Israeli sabotage and assassinations of Iranian nuclear scientists.

Britain, France, Germany, and Brussels are complicit with the Trump regime's aim to kill the JCPOA — by failing to observe SC Res. 2231, adopting the landmark agreement, a flagrant international law breach.

US CENTCOM commander General Kenneth McKenzie claimed without evidence that Iran will respond to incidents affecting its facilities in recent weeks.

In early July, Iran's civil defense head Gholamreza Jalali said "(r)esponding to cyberattacks is part of the country's defense might."

"If it is proved that our country has been targeted by a cyberattack, we will respond."

Iran's IRNA suggested that sabotage by Iran's enemies may be behind recent incidents, adding:

"So far, Iran has tried to prevent intensifying crises and the formation of unpredictable conditions and situations."

"But the crossing of red lines of the Islamic Republic of Iran by hostile countries, especially the Zionist regime and the US, means that strategy…should be revised."

The latest from Iran on Sunday is that a fire erupted in a cellophane printing facility in the country's northwest, according to the Iranian Labor News Agency (ILNA), the cause of the blaze unknown so far.

If foul play is behind the latest incidents and/or earlier ones in recent weeks, it's highly likely that Tehran will respond against whoever is responsible.