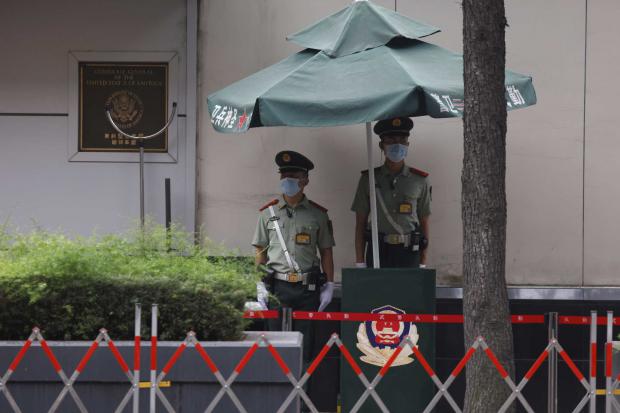 His regime's ordered closure and takeover of China's Houston consulate was the latest shoe to drop in Washington's war on China by other means.

It was a major provocation following numerous others preceding it, likely many more of he same to follow — US cold war that risks turning hot by accident or design.

According to the Houston Chronicle on Friday, Trump regime federal agents forcibly took over control of China's consulate in the city "40 minutes after the 4 p.m. eviction deadline passed."

A "back door was pried open" after federal agents were unable to enter through three other entry points.

Trump regime agents wore t-shirts IDing them as from the State Department.

Before they entered, Houston police closed off streets near the diplomatic facility — aiding and abetting federal lawlessness.

Moments before the unlawful takeover, "three white vans pulled out of the consulate." At least two had consul plates IDing them.

Time and again, both right wings of the US war party trample on the rule of law in pursuit of US imperial aims.

International law is clear and unequivocal.

Embassies, consulates, and other diplomatic facilities in host countries are sovereign territory of nations operating them.

UN Charter Article 2(4) states: "All members shall refrain in their international relations from the threat or use of force against the territorial integrity or political independence of any state, or in any other manner inconsistent with the purposes of the United Nations" – what the US does repeatedly.

Article 22(1) of the 1961 Vienna Convention on Diplomatic Relations states:

"The premises of (diplomatic) mission(s) (are) inviolable. The agents of the receiving State may not enter them, except with the consent of the head of the mission."

Article 22(3) states: "The premises of (diplomatic) mission(s), their furnishings and other property thereon and the means of transport of the mission(s) shall be immune from search, requisition, attachment or execution."

Article 29 adds: "The person of a diplomatic agent shall be inviolable. He shall not be liable to any form of arrest or detention."

"The receiving State shall treat him with due respect and shall take all appropriate steps to prevent any attack on his person, freedom or dignity."

Article 30 grants the same inviolability and protection to a diplomat's private residence, his or her papers, correspondence, and property.

"We urge the United States to reject its Cold War mindset and ideological bias, view China and China-US relations in a fair manner, refrain from those negative words and deeds, and create conditions for bringing the bilateral relationship back on track."

Washington's imperial agenda is all about dominating other nations by whatever it takes to achieve its aims — wars by hot and/or other means its favored strategies.

He's "looking for someone to blame (for) his failures in handling the coronavirus and…econom(ic)" crisis conditions.

He accused the Trump regime of using China as a "scapegoat," adding:

Regime "hawks" are pursuing "a relentless campaign of propaganda to demonize China across the whole country."

Freeman also believes ordering closure of China's Houston consulate is a Trump regime ploy to encourage Biden campaign criticism of the move — so he can call the presumptive Dem nominee "soft on China."

On Friday, Beijing retaliated against the hostile Trump regime action by ordering closure of Washington Chengdu consulate, discussed in a previous article.

Reportedly, US staff were given a Monday deadline to leave the premises.

US war on China by other means rages, Pompeo acting as point man for its extrajudicial actions.

Pushing the envelope with no letup against China, Russia, Iran, and other nations free from its repressive control is what the scourge of Washington's recklessly dangerous imperial agenda is all about.

"In its attempt to interrupt China's development process completely, the US is ready to do anything" — no matter how reckless or lawless.

"No country with a conscience and independent spirit will stand with the United States."

While Beijing continues to seek cooperative relations with the US, its ruling authorities firmly uphold the nation's sovereign rights as affirmed under international law without compromise.

Sino/US relations are close to the breaking point. Geopolitical know-nothing Trump is being manipulated by hard-right extremists surrounding him.