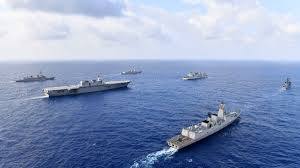 US rage for dominating other nations plays out by waging endless preemptive wars by hot and other means against nonbelligerent nations threatening no one — with no end of them in prospect.

Russia is the world's dominant military power because of its unmatched hypersonic and other super-weapons.

China is heading toward becoming the world's largest economy in the years ahead.

The US has been declining politically, economically, and militarily for decades because of its endless wars on invented enemies, its fantasy democracy, its one-party rule with two right wings, its contempt for ordinary people everywhere, and its unwillingness to change.

China and Russia stand in its way to control planet earth, its resources and populations.

Are things heading toward hot war against them?

Will the US ruling class risk potentially catastrophic nuclear war in a foolhardy attempt to eliminate the key rivals to its long-sought unchallenged supremacy?

Will its dominant members risk destruction of planet earth to own it?

Will humans be the only species ever to self-destruct and eliminate all other life forms with it because of endless wars that may kill us all one day if not stopped?

The Middle East and South China Sea are the world's leading flashpoints.

The hostile presence of US military forces in these parts of the world where they don't belong could result in war(s) to end all future ones by use of self-destructive thermo-nukes.

US military exercises in these waters are hugely provocative.

Will they lead to war on Iran in the Middle East and/or war on China — either or both by accident or design?

The South China Morning Post (SCMP) raised the issue of the US and China "stumbl(ing)" into war because of increasingly provocative Pentagon actions in waters near Chinese territory — on the phony pretext of freedom of navigation exercises.

Bilateral relations are worse than at any previous time in the past half century.

"(M)ilitary conflict between (these super-powers) no longer seems a far-fetched possibility," said SCMP.

Post-WW II, the US preemptively waged two Asian land wars, winning neither — both against nations with far less military strength, resources, and population size as China.

According to the right-wing Hoover Institution's Michael Auslin, "(n)either Beijing nor Washington will choose war, but I am very worried they could stumble" into one.

SCMP explained that one-third of world shipping passes through the South China Sea annually — involved in over $3 trillion worth of global trade.

Its waters are potentially rich in oil and gas yet to be developed.

The US covets control of hydrocarbon resources worldwide — why it's waging all-out war by other means on Iran and Venezuela that could turn hot.

US navy warships regularly conduct provocative military exercises near or in waters China claims as its own that bring vessels of both nations "into close range" of each other, SCMP explained, adding:

"In October 2018, a Chinese destroyer came within 40 meters of a US warship…a collision…narrowly avoided."

If a future incident causes a warship of either country to be sunk, would the aggrieved nation consider it a casus belli?

Would it retaliate against a similar vessel of the other nation? Would things escalate from there?

Are South China Sea conditions so on a hair trigger that unthinkable Sino/US war could begin ahead by accident of design?

As long as over-the-top militarists like Pompeo direct Washington's geopolitical agenda, anything is possible.

His hostility toward China is reflected in remarks he made like the US won't let "Beijing…treat the South China Sea as its maritime empire," stopping short of saying precisely what actions he recommends to counter Beijing militarily if things go this far.

Last year, former US war department military planner David Ochmanek warned that conflict with China could get Washington's "ass handed to it," adding:

"(L)et's say it was 2005. If we were to run a scenario for 2010, Chinese capabilities weren't fully mature, and what you would see was a stand-off, not a clear-cut victory or defeat for either side, but still there were surprising numbers of casualties and losses to the United States."

"The lethality of Chinese forces was growing dramatically."

"As we advance the clock forward, and start to look at the balance in 2020, 2025, 2030…typically we were finding clear-cut victories for China."

Its military strategy is designed to defend the South China Sea against an aggressor like the US, including its airspace.

In 2015, a Rand Corporation report noted that China's "technology and operational proficiency still lag behind those of the United States," but it's rapidly closing the gap.

Rand also noted that the South China Sea is the PLA's "home turf."

US forces must travel thousands of miles to get there.

While many US warships are based in the Indo/Pacific, Pentagon supply lines stretch from one continent to another.

China has a home court advantage close to its supply lines in defending its waters, airspace, and coastal areas it would lack if turned aggressor against US territory.

If Sino/US conflict erupts and goes nuclear, all bets are off.

Both nations have long-range ballistic missiles able to strike targets anywhere in the territory of the other with weapons of mass destruction.

That should be incentive enough to avoid what could escalate to global war.