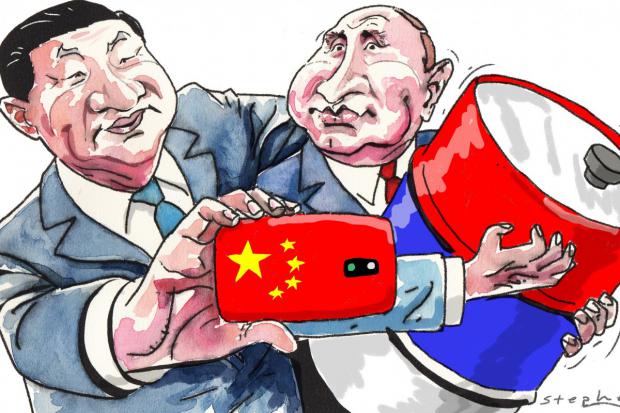 On issues of national security, the NYT operates as a press agent for US preemptive wars on nonthreatening nations by hot and other means.

China, Russia and Iran are Washington's prime targets — nonbelligerent nations that pursue cooperative relations with other countries, confrontation with none.

In service to imperial US interests, the Times treats them as pariah states — defying reality.

The self-styled newspaper of record is a propaganda rag, a misinformation and disinformation proliferator, rubbish masquerading as all the news that's fit to print on major issues.

It's also my favorite presstitute target because of its global reach.

Each edition overflows with fake news, especially on geopolitical issues.

This week, its so-called editorial board lashed out at China in support of war on the country by other means that could turn hot because of Trump regime congressional hostility toward its growing prominence on the world stage.

Ignoring US aggression in multiple theaters with no end of it in prospect, the Times falsely accused China of "throwing its weight around in the South China Sea" — a US specialty in its waters and everywhere else.

Ignored by the Times as well was that if China or Russia operated in the Gulf of Mexico or near US east or west coast waters the way Pentagon warships and warplanes operate provocatively near their borders, the risk of global war 3.0 would be greatly heightened.

Control of South China Sea waters is for China and other east Asian nations to address and resolve — free from foreign interference, especially by imperial bully USA, free as well from the Times and other establishment media press agents for wealth and power.

The Times falsely claimed the following:

"(W)ith much of the world preoccupied with (COVID-19),  China has sharply escalated its coercive activities (sic)."

Ignored by the Times were provocative US military drills near and within Chinese waters on the phony pretext of freedom of navigation — risking confrontation between warships and warplanes of both countries.

"Reality has proved once again that the US is the biggest facilitator of the militarization of the South China Sea, and is a troublemaker for the region's peace and stability," adding:

"The PLA will remain on high alert, and adamantly safeguard national sovereignty, security, and development interests, as well as the peace and prosperity of the region."

Ignoring US war on humanity at home and abroad, he falsely accused China of pursuing "designs for hegemony" over other nations — how the US operates worldwide.

What the Times leaves unexplained is what's most important to report. What it features defies what journalism is supposed to be.

No credible evidence was cited because none exists.

Its so-called source was long ago discredited US Russophobic intelligence — concoctor of nonexistent Russian US election meddling.

According to Times disinformation, "Moscow is continuing to try to influence Americans as the election draws closer (sic)," adding:

Russian intelligence is putting out "English-language disinformation and propaganda about the pandemic (sic), such as amplifying false Chinese arguments that the virus was created by the United States military…"

The Trump regime's falsely designated "Wuhan virus" indeed was made at a US biolab, spread globally to further the diabolical interests of US dark forces I discussed in earlier articles.

Outbreaks occurred in Hawaii and Europe before China.

Reports by the Times and other establishment media exclusively stick to the falsified official narrative, suppressing truth-telling that exposes it.

The Times: "Last week, intelligence officials warned about Russian, Chinese and Iranian efforts to interfere with the (November US) election (sic)."

Once again, not a shred of evidence was presented because there is none.

As a longtime GR research associate, a truth-telling website with impeccable credibility, does that make me a Russian agent, especially for being a frequent guest on Sputnik News?

I've never been to Russia, don't speak or read the language, and never had contact with a political, military, intelligence, or any other official of the country.

According to the Times, the Strategic Culture Foundation website is linked to "Russian intelligence," citing two unnamed US officials.

At times, its editor posted some of my articles, the same true of many other websites I have no affiliation with.

Propaganda is what the Times and other establishment media do, proliferating state-approved rubbish.

I follow RT and Sputnik News English-language websites daily because they're invaluable sources of truth-telling on geopolitical issues — polar opposite how the Times and other establishment media operate.