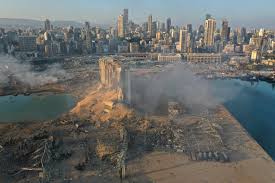 A perfect storm affects Lebanon and vast majority of its near-seven million people, including:

Unemployment of a third or more of working-age Lebanese.

Poverty exceeding 50% of the population.

Over 80% inflation since last October, debasing the Lebanese pound.

Based on its debt-to-GDP ratio, Lebanon is the world's third highest indebted country, according to the IMF, a nation unable to repay its creditors.

The draconian US Caesar Syria Civilian Protection Act that aims to starve the country's population into submission greatly harms Lebanon's economy and people.

So does US war on Syria in its 9th year with no resolution in prospect.

The misfortune of bordering Israel compounds its woes further.

According to Consultancy Middle East, the country's central bank lost its monetary ability to manage the economy.

Once called "the Paris of the Middle East," a fusion of East and West, a hub of modernity, art, fashion, and culture, much of Beirut was heavily damaged by the cataclysmic blast — with little ability to rebuild without large-scale financial help from abroad.

According to Beirut-based InfoProResearch, a local economic consulting firm, in the 17-month period from January 2019 through May 2020, around one-fifth of Lebanese companies suspended operations or shut down entirely.

The number is likely much higher in the aftermath of the August 4 blast.

The Beirut metro area is home to around 2.2 million of Lebanon's 6.8 million population.

According to the Wall Street Journal last week, the Trump regime intends imposing maximum pressure on Lebanon by "sanction(ing) (targeted)  politicians and businessmen" in an effort to weaken Hezbollah's influence.

When the nation and its people are on their knees in desperate need of help, US hardliners — likely in cahoots with NATO and Israel — intend rubbing salt in the wounds of the state, its enterprises and people to increase mass deprivation and suffering.

The Journal said Trump regime actions on Lebanon will target its "leaders aligned with Hezbollah."

Its democratically elected officials are part of the Lebanese government.

Its leadership threatens no one except in response if preemptively attacked — self-defense a UN Charter right applying to all nations.

The Journal added that the Trump regime "see(s) an opportunity to drive a wedge between Hezbollah and its allies as part of a broader effort to contain the Shiite force backed by Tehran."

Iran backs all nations that observe the rule of law in support of world peace and stability, polar opposite how the US, NATO and Israel operate.

The Journal got things backwards, claiming "Hezbollah…is the region's most potent threat to Israel (sic)."

Along with the US, Israel is the "most potent threat to" regional peace and stability.

In saying Trump uses sanctions "as a central tool in his 'maximum pressure' campaign against Iran" and other countries, the Journal failed to explain that only Security Council members may legally impose them — not individual countries against others.

An unnamed Trump regime official told the Journal that it intends to "take advantage of the (desperate) situation (in Lebanon) to shake things up" in the country.

It wants Hezbollah's influence weakened at a time of severe economic and financial hardships for the nation, its institutions and people.

Hezbollah is a popular resistance force to be reckoned with against US/NATO/Israeli imperial aims in the region — including against ISIS, al-Qaeda and likeminded terrorists they use as proxy fighters.

Their strategy includes maximum pressure to cause maximum pain and suffering for people in targeted countries.

Maybe its hardliners have more regional war in mind, perhaps an October surprise ahead of US November 3 elections.

NYT Style Prostitution of the Press

No Reprieve from Economic Collapse in the US