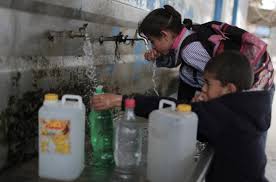 Water, not bread, is the true staff of life.

Accounting for over half of human body weight, people can only go a few days without it and survive, Medical News Today reported.

Among other important functions, water delivers oxygen throughout the body. It also regulates body temperature.

According to Gaza's Coastal Municipality Water Utility (CMMU) director general Monther Shublaq, about 97% of Strip water is polluted and unsafe to drink.

"(T)he international community is failing to…protect the health and dignity of almost 2 million people who have nowhere else to go."

Among other serious issues, drinking unsafe water increases the risk of kidney damage that if left unchecked could be fatal.

Israel controls water throughout the country and Occupied Territories —  except for a coastal aquifer in Gaza that pollution made non-potable.

Water and sanitation are fundamental human rights that are enshrined in UN conventions.

A generation later, its population doubled but receives much less water than agreed on.

Israelis get an almost unlimited supply. To make up for the shortfall, the Palestinian Authority must buy around double the amount of water from Israel's national water company Mekorot than it agreed to buy when negotiating Oslo II.

Because Jewish state authorities reneged on what was agreed on, West Bank Palestinians endure a manmade water shortage for drinking, agriculture, and other uses, the problem especially acute in summer.

The situation for Gazans is worst of all by far.

According to B'Tselem, Strip "tap water is salty and polluted and is not fit for drinking."

"(R)esidents are forced to use this water for bathing and washing, yet the supply is irregular and unpredictable."

For drinking and cooking, they must buy water from private sources that's "substandard" most Gazans can't afford.

The long ago pristine coastal aquifer they rely on is largely contaminated.

Over 96% of water from this source is unsafe to drink.

"(A)bout 40% of the domestic water supply is lost on the way to consumers because of Gaza's outdated infrastructure," B'tselem explained.

As a result of irregular supplies of water because Strip power is intermittent, residents stock it as able in rooftop containers for use when no other source is available.

Lack of safe to drink water is hazardous to the health of the Strip's two million people.

B'Tselem: "The low quality and limited supply of water force Gazans to purchase desalinated water from private vendors, mostly for drinking and cooking but also for other purposes."

"Much of the purchased water is polluted, too."

According to the WHO, 100 liters per capita per day is the minimum amount of water needed.

Gazans on average get 88 liters of mostly unsafe water. Israelis on average receive over 200 liters.

For years, Gaza has been unsafe and unfit to live in, its people enduring Israeli-enforced crushing hardships.

Below is how a mother of seven from Gaza's a-Shati refuge camp described her ordeal, saying the following:

She and her husband are unemployed. Living in a 45 square meter house, they and their seven children struggle on a monthly 1,500 shekel ($440) stipend.

"The water shortage here in the camp is severe," she said, adding:

"The water is so salty that you can't even drink it or cook with it, not to mention laundry or cleaning, but there's no choice but to use it."

In summer, "we only get water once every two to three days."

"Because of the power outages, sometimes we don't have water and electricity at the same time, so we can't use the pump to get water to the roof."

"We don't own a generator, so sometimes my sons and I have to fill up small containers and carry them to the roof. It's very tiring."

"Sometimes I stay up all night and wait until the power and water come on to fill the containers."

Salinity in the water from faucets looks "yellowish (and) rusty."

"The rust ruins the faucets and I replace them whenever I get the chance. But sometimes I have to make do with them as they are."

"I buy drinking water from trucks and use it for drinking, delicate laundry and cooking."

"Every month I fill up a 250-liter container in my kitchen five times."

"It costs 15 shekels every time. It's a financial burden and sometimes, when I don't have money, I ask the vendor for credit."

"In the winter, if I don't have the money, I stock rainwater for our household needs."

"The salty water causes a lot of problems. It damages our hair and fingernails, makes our skin dry and is bad for our teeth and ears."

"Our eyes and bodies really itch after we shower. My kids complain about the irritation in their eyes and suffer from rashes."

"My daughters, who are young women, and I suffer from hair loss and our skin is very dry."

"We don't have money to buy creams and ointments and have to get by without them."

"The water isn't even clean enough to cleanse before prayer."

"I feel like it's almost sewage, not even fit for animals to drink."

B'Tselem published four other family testimonies similar to the above on unsafe to drink Gaza water.

Another mother of four said the following:

"If I had to choose, I'd rather make do without electricity and have water all the time."

"Water is life and without water in my home, I feel hopeless and exhausted."

Israeli actions flagrantly breach the UN Charter, Fourth Geneva, the International Covenant on Civil and Political Rights, along with other international laws.

Its criminal actions include decades of illegal occupation, theft of historic Palestinian land, crimes of war and against humanity, torture, targeted assassinations, and virtually every other imaginable form of wrongdoing.

All of the above and much more has been going on for generations against long-suffering Palestinians.

Yet the world community never took acted to hold its culpable officials accountable.

On Wednesday, EU officials announced their intention to meddle illegally in Belarusian affairs by imposing illegal sanctions on as yet unnamed officials — in support of the Trump regime's attempt to replace its government with pro-Western puppet rule.

Their announced intention and call for a transition of power in Belarus makes them complicit with Trump regime demands like many times before.

And yet for time immemorial, the EU ignored the highest of high crimes committed by the US, Israel, and their own ruling regimes.