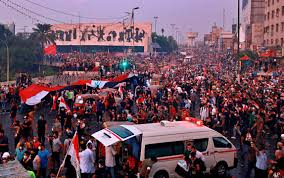 Long-suffering Iraqis have legitimate grievances in the post-Saddam Hussein era.

Saddam ruled despotically but he wasn't all bad. According to UNESCO, he established one of the region's best educational systems that was free to the highest levels.

Healthcare was near-universal, available in nearly all urban areas and most rural ones, according to UNICEF.

Pre-Gulf War, it ranked with the region's best. Since that time, things changed dramatically for the worst.

For the last 30 years, the US waged wars on Iraq by hot and other means.

The US-launched Gulf and 2003 wars erased the cradle of civilization.

US regimes bear full responsibility for wrecking the country to plunder its resources.

Iraq under Saddam was no rose garden. Decades of US rampaging made life for the vast majority of Iraqis far worse than any time under his rule.

Before his death from imprisonment and mistreatment by US occupying forces, former Iraqi foreign minister and deputy prime minister Tariq Aziz said the following in 2013:

"There is nothing here any more. Nothing. For thirty years Saddam built Iraq, and now it is destroyed. There are more sick than before, more hungry."

"The people don't have services…We are all victims of America and Britain. They killed our country."

The US killed Aziz slowly by neglect and other mistreatment, the same thing true for Iraq.

The prosperous nation of long ago no longer exists, destroyed by US rapaciousness.

A year after Iraqis took to the streets in 2019 because their rights and welfare were unaddressed, they're protesting again because promises made remain unfulfilled.

In Baghdad, Basra, Najaf and elsewhere, they demand fundamental change.

Instead of addressing their justifiable concerns, security forces attacked them with tear gas, stun grenades, and other harsh tactics, making a bad situation worse.

Chanting "(o)ur our souls, we sacrifice for you Iraq," they marched through Baghdad's Tahrir Square.

One protester likely spoke for others, saying "(t)oday is an important day as it marks a year since October 25, 2019 and our revolution for which we gave our blood and sacrificed many martyrs."

"On the top of our demands is holding the killers and kidnappers accountable. Justice must be achieved and we'll keep coming until we see that."

Other protesters gathered outside the US-controlled/heavily fortified Green Zone.

A year ago, tens of thousands of Iraqis took to the streets, hundreds killed or wounded before energy waned and relative quiet returned.

According to a 2020 Arab Opinion Index survey, most Iraqis and others in the region said they don't have enough income for their basic family needs.

Iraqi regimes give short shrift to public rights and needs.

According to Iraqi analyst Sajad Jiyad, "protests have continued for over a year and are being renewed today (because) the ruling elite (instituted) no significant reforms…"

"The size of protests have not reached the numbers from a year ago but given that the economic situation has deteriorated and trust in the political system continues to fall, it will be very likely that protests will gain momentum."

Along with failure of Iraqi  governance to address fundamental rights and needs of all Iraqis, as long as US forces occupy the country and remain in the region, they'll never be free from want and the threat of more Pentagon-led aggression.