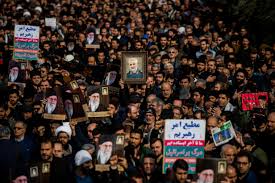 Time and again, the world's leading belligerent, humanity's greatest threat USA wrongfully blames other nations for its own offenses or for things they had nothing to do with.

Iraqis want their long nightmare ended. They want US forces out of their country once and fall. They want their sovereignty back.

"Our embassy in Baghdad got hit Sunday by several rockets (sic)."

They detonated close to the facility, not striking it directly, causing some Green Zone material damage, no Americans hurt.

Trump: "Now we hear chatter of additional attacks against Americans in Iraq."

"Some friendly health advice to Iran: If one American is killed, I will hold Iran responsible."

Iranian authorities urged Iraqi militia groups to halt attacks on US facilities while Trump remains in office — hoping for some improvement in bilateral relations when Biden/Harris replace him.

Things can't get much worse short of all-out war.

For over 40 years, the US has been militantly hostile toward Iran for not bending to its will — not for any Islamic Republic threat which doesn't exist.

"Putting your own citizens at risk abroad won't divert attention from catastrophic failures at home."

"Such fabricated, groundless and repetitive claims and accusations are made in line with the White House's common blame game and are aimed at overshadowing the very bad situation that Trump is in now" nearing end of his tenure.

"We have repeatedly announced that attacks on diplomatic and residential sites are unacceptable, and in this special case the finger of blame should be pointed at the US and its regional allies which are seeking more tensions and new plots."

"The Islamic Republic of Iran will hold the US government accountable for the consequences of any unwise move in the current situation."

"We've had two lunatics in (recent) history. One was Saddam who (waged preemptive) war on us and the other lunatic is Trump who imposed the economic war on us."

His "destiny will be no better than Saddam's."

"We saw how the Iranian people broke them with their resistance against those who wanted to break us."

"We hope to break the sanctions every day."

"If we break the embargo, we will defeat the Zionists as well as the reactionaries and the extremists of the US."

On changing of the guard in Washington next month, Rouhani added:

The incoming US regime can decide for itself" about relations with Iran.

"The JCPOA is an agreement coming out of hard-won negotiations involving difficult gives and takes, and any proposal for its revision, renegotiation or extension will be against (SC) resolution 2231 and absolutely not acceptable to Iran."

The Islamic Republic has no friends in Washington. Little will change when Biden/Harris replace Trump in January.

As long as Iran is free from US control, its ruling authorities and Congress will target the country for regime change.

The same is true about all nations unwilling to sacrifice their sovereign rights to a higher power in Washington.

Looking ahead, it's unclear if the US  will rejoin the JCPOA that the vast majority of world community nations support or demand unacceptable changes for embracing it Iran rejects.

It's unknown if the landmark agreement will survive or go the way of other international agreement lost because of US imperial arrogance.

Biden/Harris may be worse than Trump, what I expect on key issues.

Looking ahead to next year, US dirty business as usual will continue unchanged like most always before.

US domestic and geopolitical policies are hostile to what just societies hold dear.

The worst of times likely lie ahead.

Prospects for positive change are virtually nil no matter which right wing of the US one-party state runs things.

Despite no threat from Iran, Trump regime hardliners are preparing what the White House calls a "range of options" to deter attacks by Iran no evidence suggest may happen.

According to Reuters, they're "designed to be non-escalatory (sic) and to deter further attack."

Any US act of aggression demands a response. None encourages more of the same.

Citing an anonymous US official, Reuters added that White House "strategy was to be vocal about (last) Sunday's (Green Zone) attack, but there was not a move towards using military force."

With four weeks left in his tenure, chances of his regime launching strikes on Iranian territory are virtually nil.