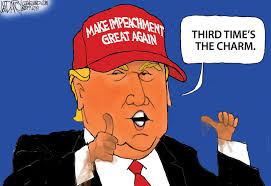 He wants a third one and Senate conviction, including on the phony charge of violating Section 3 of the 14th Amendment — falsely claiming he failed to adequately respond to the January 6 Capitol Hill incident (sic).

Blaming him for what dark forces plotted against him compounded Tribe's defiance of reality.

He had nothing to do with the orchestrated Capitol Hill false flag.

It aimed to more greatly vilify him than already for phony reasons — ignoring justifiable ones.

What happened also aimed to make him irreparably damaged goods to prevent him from seeking another term as president in 2024.

University of Illinois Law Professor Francis Boyle has higher standards than Tribe — notably by supporting equity, justice, and the rule of law.

He once advised parents not to send their children to Harvard Law School for good reason.

Calling it a "neocon cesspool, kangaroo school for torturers," it's no longer fit to educate lawyers, members of the bar, and officers of the court, he believes.

On January 8, he called for impeaching Trump a second time before leaving office — unjustifiably justifying this action by a litany of bald-faced Big Lies.

He lied saying "(h)e then whipped them into a frenzy and aimed the angry horde straight at the Capitol (sic)," adding:

"When Trump's mob (sic) breached the building, he inexcusably dawdled in deploying force to quell the riot (sic)."

"(W)hen he finally released a video statement, it only made matters worse (sic)."

He "knew perfectly well that his rally on Wednesday was a powder keg of his own creation (sic)."

"But he gleefully lit a match and tossed it at Congress (sic)."

All of the above is utter rubbish. Not a shred of credible evidence supports it.

I've been a sharp Trump critic throughout his tenure — for legitimate reasons, not phony ones like the above.

On January 13, Tribe expressed support for Senate trial and conviction even after Trump leaves office.

Constitutional scholars disagree on whether this action is legitimate.

There should be no disagreement about not seeking accountability against anyone unless legally justifiable.

Last week, Tribe again falsely accused Trump of "fomenting and inciting insurrection" on Capitol Hill — citing no credible evidence because there is none.

He lied calling Trump "a deadly threat to our survival as a constitutional republic (sic)."

The accusation applies to hoards of extremist elected and appointed GOP and Dem hardliners infesting Washington — omitted from Tribe's remarks.

There's plenty to criticize Trump for, along with wanting him held accountable.

Tribe mentioned none of it or said anything about high crimes of war and against humanity at home and abroad by both right wings of the one-party state.

He was silent about Obama/Biden's rape and destruction of Libya and Syria, their terror-bombing of seven countries in eight years.

Nor did he admit that they force-fed austerity on ordinary Americans during hard times when federal help was needed, while providing lavish handouts to corporate predators.

Or that they waged war on courageous truth-telling whistleblowers, immigrants of the wrong color and nationality, as well as against America's most disadvantaged citizens in serving privileged interests at their expense.

Throughout their eight years in office, they did more harm to more people than any of their predecessors — at home and abroad, including coups against legitimate governments replaced with despotic ones.

Defying reality while embarrassing himself at the same time, Tribe falsely claimed that "no president has ever in our history done anything as obviously subject to impeachment" as Trump (sic).

He lied claiming DJT "foment(ed) violent insurrection and sedition against the legislative branch" of government.

Honest historians and political analysts one day will set the record straight.

He ignored justifiable ones that apply to most elected and appointed officials in Washington.

What Tribe should have explained, he swept under the rug.

He one-sidedly supports undemocratic Dems instead of holding their feet to the fire and demanding accountability for high crimes against humanity at home and abroad too egregious to ignore.