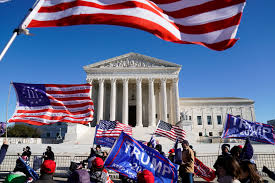 On Monday, the US Supreme Court refused to hear legitimate challenges to the 2020 presidential election outcome.

In January ahead of Biden's inauguration, the court denied requests by Trump and GOP supporters to hear and rule on lawsuits claiming brazen fraud in Arizona, Georgia, Michigan, Pennsylvania and Wisconsin.

In Pennsylvania, the state's Supreme Court allowed election officials to count mail ballots that arrived up to three days after Election Day 2020.

The US Supreme Court voted 4-4 on whether to issue a stay of its ruling, short of a majority needed to block it.

"The Pennsylvania Constitution requires in-person voting, except in narrow and defined circumstances," adding:

"This appeal argues that Pennsylvania cannot change the rules in the middle of the game."

Justices Thomas, Alito and Gorsuch agreed, one vote shy of four votes needed to grant a writ of certiorari — an order by the Supreme Court for a lower court to send up the record of a case in question for review.

In dissenting from the majority on the Pennsylvania case, Justice Thomas said the following:

The Pennsylvania Supreme Court's "decision to rewrite the rules seems to have affected too few ballots to change the outcome of any federal election."

"But that may not be the case in the future. These cases provide us with an ideal opportunity to address just what authority non-legislative officials have to set election rules, and to do so well before the next election cycle. The refusal to do so is inexplicable."

"One wonders what this Court waits for. We failed to settle this dispute before the election, and thus provide clear rules."

"The decision to leave election law hidden beneath a shroud of doubt is baffling."

"By doing nothing, we invite further confusion and erosion of voter confidence."

"Our fellow citizens deserve better and expect more of us."

In his dissent, Alito (joined by Gorsuch) said the following:

"Now, the election is over, and there is no reason for refusing to decide the important question that these cases pose."

"Some respondents contend that the completion of the 2020 election rendered these cases moot and that they do not fall within the mootness exception for cases that present questions that are 'capable of repetition' but would otherwise evade review."

That argument fails (because the issue in the case) is surely capable of repetition in future elections."

Long before election day 2020, US dark forces decided the outcome. Voters had no say.

Trump challenged the system so was denied a second term.

Wrongfully blaming him for what happened smoothed the way for Biden/Harris to replace him — illegitimately by brazen election fraud in key swing states.

Things worked as planned. The Supreme Court's refusal to hear legitimate challenges to the election outcome closed the books on the issue.

As long as Biden/Harris remain in office, they'll serve illegitimately, not the other way around.

It's by no means the only example.

US dirty politics and election rigging date from at least the early 19th century — at the federal, state and local levels.

Election 2020 perhaps was the most brazen example.

By refusing to rule on this core issue, the Supreme Court effectively OK'd election fraud over a free, fair and open system according to the rule of law.