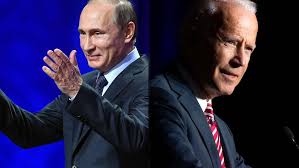 "They will always find and invent them." When imposed, Moscow will respond appropriately, not aggressively the way the US and West operate.

"If no symmetric or proportionate action is taken, where the United States crosses a red line, it will feel absolute impunity."

His boss "welcome(s) the EU's decision to impose sanctions against Russia under the human rights sanctions regime in response to actions taken against Aleksey Navalny and his supporters (sic)."

He stopped short of explaining what Politico reported on Monday, saying:

The Biden regime "is preparing to respond to Russia's poisoning (sic) and jailing of Russian opposition leader Alexey Navalny, and is expected to coordinate a sanctions rollout with European allies in the coming weeks, according to" anonymous sources, adding:

"Suffice it to say we won't stand by idly in the face of these human rights abuses (sic)."

Fact: No Russian poisoning of Navalny occurred, no human rights abuses by Moscow.

Biden was installed as a figurehead front man for diabolical US deep state interests at home and abroad.

In short order, he breached virtually every campaign promise made.

It's further proof that US and other Western politicians can never be trusted, why dealing with them achieves nothing positive.

Domestically, Biden and hardliners around him are waging all-out war on ordinary Americans instead of serving them.

He and media press agents continue a mass deception campaign to get ordinary Americans jabbed with hazardous toxins that don't protect against flu-renamed covid and risk serious health issues or death if taken as directed.

Abroad, he's escalating war on Russia by other means, doing much the same thing against China, and refuses to negotiate with Iran in good faith on the JCPOA and related issues.

It noted that Biden regime sanctions on Russia will be based on the Russophobic Magnitsky Act (2012). the Chemical and Biological Weapons Control and Warfare Elimination Act (1991), and Executive Order 13382.

The latter freezes assets and imposes other penalties on alleged proliferators of WMDs.

Russia will retaliate against unlawful sanctions if imposed by the US and EU.

On Saturday, a Moscow City Court said the following:

"To change the ruling of Moscow's Simonovsky District Court: under article 72 of the Russian Criminal Code, the time Navalny spent under house arrest from 30 December 2014, to 17 February 2015, should be counted as part of the prison term, with one day under house arrest counted as one day of imprisonment."

"The rest of the order remains unchanged."

Russia will respond in its own way at a time of its choosing.

Dismal relations with the West most likely will deteriorate further.

What's going on has nothing to do stated reasons by the West.

It's all about Russia's sovereign independence, free from US control.

US-led Western war on the country is because its ruling authorities won't sell their souls to a higher power in Washington, Brussels or anywhere else.