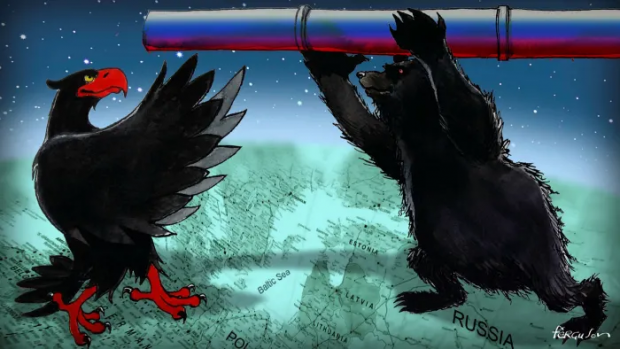 Are Russian/EU relations at a tipping point?

Will the Kremlin no longer tolerate being pushed around and otherwise mistreated — in violation of international law?

The UN Charter and other international law prohibit nations from interfering in the internal affairs of others.

Humanitarian intervention, responsibility to protect, and other pretexts unjustifiably justify US/Western actions on the world stage that international law prohibits.

Throughout the post-WW II period, Western relations with Russia have been uneasy.

Russia's lost decade in the 1990s under Boris Yeltsin was the exception to the rule.

Under him, over half the population became impoverished.

Western interests profited hugely at the expense of millions of exploited Russians.

When he died, the NYT called him "a Soviet-era reformer…the country's democratic father…and later a towering figure of his time as the first freely elected leader of Russia, presiding over the dissolution of the Soviet Union and the demise of the Communist Party (sic)."

A Western/establishment media favorite, most Russians despised him for the human misery and economic wreckage he caused.

In 2007, Putin's memorable Munich Security Conference address challenged the West with remarks like the following:

"A world with one master, one sovereign" is unacceptable.

"(T)his certainly has nothing in common with democracy."

(W)e are constantly being taught about democracy. But for some reason those who teach us do not want to learn themselves."

"(T)he unipolar model is not only unacceptable but also impossible in today's world."

It "certainly has nothing in common with democracy."

"(T)he model itself is flawed because…(u)nilateral and frequently illegitimate actions have not resolved any problems." They create major ones.

"We are seeing a greater and greater disdain for the basic principles of international law."

"One state…first and foremost the United States, we are seeing a greater and greater disdain for the basic principles of international law."

The above and similar remarks widened an East/West divide.

US-led Western hostility toward Moscow greatly increased in the aftermath of Obama/Biden's 2014 coup in Ukraine — democracy replaced by Nazi-infested fascist tyranny on Russia's border, a dagger pointing at its heartland.

Time and again, Putin called for mutual cooperation with the West to save humanity from another devastating global war — perhaps with nukes if launched.

"Let's work together on this," he urged at Munich, adding:

At the time and since then, his outreach to the West went at least largely unreciprocated.

Today, Russia relations with the West are at a low point.

In early February, Biden signaled continued US dirty business as usual against invented enemies — not a new course toward cooperative relations with other countries.

He falsely accused China and Russia of "advancing authoritarianism…to damage and disrupt our 'democracy (sic),' " adding:

"(T)he days of the United States rolling over in the face of Russian aggressive actions (sic), interfering with our elections (sic), cyberattacks (sic), poisoning its citizens (sic) are over."

"We will not hesitate to raise the cost on Russia and defend our vital interests and our people, and we will be more effective in dealing with Russia when we work in coalition and coordination with other like minded partners."

In response to threatened EU sanctions on Russia over the phony pretext of human rights violations related to convicted felon Navalny's 2.8 year sentence for multiple breaches of his suspended sentence for embezzling millions of dollars and for expelling EU diplomats for participating in orchestrated rallies on his behalf, Sergey Lavrov responded sharply, saying:

Russian/EU relations "are going through a rough period, partly related to the unilateral illegitimate restrictions imposed by the EU under far-fetched pretexts."

"(T)his arrogance on behalf of a supposedly cultured Europe is absolutely unacceptable and inadmissible."

"We favor honesty and transparency" — polar opposite how the West operates.

Lavrov said the Kremlin is ready to cut ties with the EU if unlawful new sanctions harm Russia's economy.

He called this action "sanctions for the sake of sanctions, for one's own pleasure to punish."

They "do not bring fruit and cannot divert us from our policy of protecting the nation's interests."

"It is absolutely unacceptable to use human rights and refer to democratic principles as a geopolitical instrument."

"(W)e reaffirm our fundamental position that it is unlawful to impose unilateral restrictions in bypassing the UN Security Council."

Remarks by Lavrov and Zakharova fell on deaf ears in Brussels.

According to Reuters on Monday, EU "foreign ministers agreed on Monday to impose sanctions on four senior Russian officials close to President Vladimir Putin in a mainly symbolic response to the jailing of Kremlin critic Alexei Navalny," adding:

Saying EU relations with Russia "are certainly at a low," German Foreign Minister Heiko Mass affirmed what was agreed on with no elaboration.

An unnamed diplomat said travel bans and asset freezes will be imposed by Brussels on the following Russian officials:

Brussels earlier sanctioned six other Russian officials and a scientific center on issues relating to Navalny.

In response to expected EU sanctions, Russia's Foreign Ministry said the bloc "missed yet another opportunity to review its…approach to relations with Russia (based on) sanctions and pressure," adding:

Its demand for Navalny's release is "illegitimate (and) absurd" — a figure convicted, sentenced and imprisoned "in full accordance with Russian law."

On Friday, Lavrov said Russian/EU relations are "in tatters."

It's "an illegal tool…that runs counter to the very interests of the European Union."

The bloc "started to make persistent efforts to create the so-called horizontal sanctions mechanisms — chemical, on human rights, on hybrid (threats), on cybersecurity."

It "means that EU legislation will provide for the possibility of making prompt decisions regarding specific individuals affected by these sanctions."

"These can be individuals, institutions, companies and businesspeople."

"This is a very slippery slope that leads nowhere."

"(I)t creates colossal uncertainty in relations between us and Europeans."

Instead of pursuing mutual cooperation in the interest of world peace and stability, unacceptable US/EU war on Russia by other means perhaps will escalate more than already ahead.

Frayed Russian Ties With the West