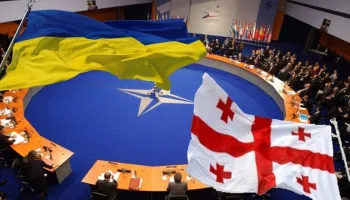 Ukraine and Georgia so far aren't part of the alliance. Both countries border Russia.

Ukraine shares a near-1,500 mile land and sea border with the Russian Federation, the longest European frontier with the country.

On Tuesday, Ukraine's pro-Western puppet president Zelensky called on US-controlled NATO to back his nation's membership in the alliance.

Saying it's "the only way to end war in Donbass" ignored intermittent US-orchestrated Kiev aggression since 2014.

The Biden regime "is committed to ensuring that NATO's door remains open to aspirants when they are able to meet the commitments and obligations of membership and contribute to security in the Euro-Atlantic area (sic)."

"We are committed to ensuring that aspirant countries wishing to join NATO meet the organization's standard for membership (sic)."

"We support our partner Ukraine in the fight against Russian aggression (sic)."

"(W)e are fully supportive and affirm NATO's open door policy, and we continue to look forward to working closely with Ukraine" — in advancing US imperial interests.

Both right wings of the US war party seek to expand NATO globally to confront Russia, China and other nations free from US control.

Aggression is how the US and its imperial partners operate worldwide, not Russia or other sovereign independent countries.

So-called collective defense — that's all about offense — is a core principle of the alliance's founding treaty.

According to the treaty's Article 5:

"(T)hey agree that if such an armed attack occurs," they'll invoke the UN Charter right of self-defense to "assist" the attacked nation(s) by collective military action.

In 1995, Ukraine became the first former Soviet republic to join NATO's so-called Partnership for Peace, a notion abhorred by the US and its imperial partners.

At the time, the Clinton co-presidency called the initiative a "track" for more countries to join NATO.

"The appearance on our borders of a powerful military bloc…will be considered by Russia as a direct threat to our country's security," adding:

Russian missiles will target Ukraine if it joins NATO or allows Washington's (solely for offense) missile defense shield to be installed in the country.

Separately, he said that Moscow will "react to what's going on around us."

Granting NATO membership to Ukraine and/or Georgia will have "extremely negative consequences."

Inviting these countries to join the alliance would violate "treaties between Russia and NATO."

"(A)ttempts to draw Ukraine into NATO would be negative for the entire system of European security, and we would be categorically against it."

Kremlin spokesman Dmitry Peskov earlier called for "a 100% guarantee that no one would think about Ukraine joining NATO."

On Tuesday, he said NATO membership for Ukraine "will only worsen the situation" along Russia's border with the country, adding:

"If you ask the opinion of several million (people in Donbass), you will see that for them NATO membership is deeply unacceptable."

Russian Defense Minister Sergey Shoigu earlier warned that Moscow "will act" if Ukraine and/or Georgia join NATO – calling this move if occurs part of Washington's  "militarization of the European continent" against Russia.

Around 20,000 US troops are involved, along with 17,000 from other NATO member states and others like Ukraine.

What's going on is highly provocative at a time when the only threats to European countries are invented.

No real ones exist, none since WW II ended over 75 years ago — except for US-led and/or orchestrated aggression.

Since Biden replaced Trump in January, US war on Russia by other means escalated.

They risk unthinkable confrontation instead of stepping back from the brink of possible conflict between two nuclear-armed super-powers.

The Kremlin has allowed the US/Ukraine attack on Donbass to go on far too long...