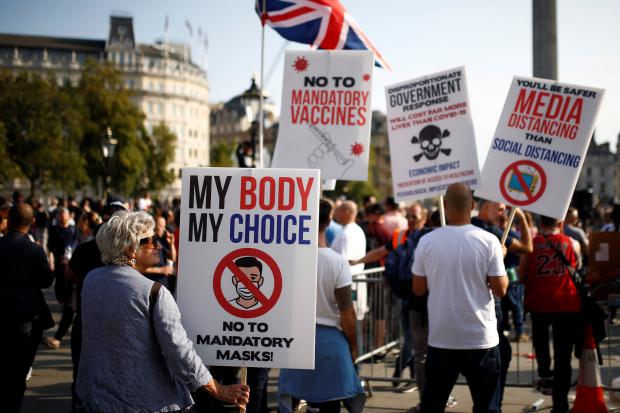 Tyranny based on the flu/covid mother of all scams replaced what almost entirely gone.

What was unthinkable not long ago is today's reality.

The road to tyranny arrived on a platform of state-sponsored/media proliferated mind-manipulating Big Lies and mass deception.

Draconian policies in France are likely prelude for what's likely throughout the West.

Last July in France, the Macron regime began fining people for failure to be masked in public places.

He ignored that masks don't protect and risk respiratory harm.

Yet fake news otherwise persists throughout the West and elsewhere.

In France, tyranny advanced to where it hadn't gone before post-WW II.

Unjabbed people entering restaurants, bars, and perhaps other enclosed public places, face up to six months in jail and fines up to 10,000 euros.

Business owners, and perhaps managers, who don't enforce mask-wearing in their establishments risk up to a year in prison and fines up to 45,000 euros.

Perhaps their businesses will be closed if don't enforce what's unacceptable.

Healthcare professionals, retirement home workers, as well as others having contact with the elderly and so-called vulnerable people in their homes risk loss of employment for failure to be jabbed with drugs designed to destroy health.

France's diabolical mandate has nothing to do with protecting public health.

It has everything to do with draconian social control and wanting maximum numbers of people irreversibly harmed by toxic flu/covid jabs.

It's all about instituting tyranny as the law of the land — similar policies likely coming throughout the West to eliminate what little remains of free and open societies.

That's the disturbing reality about what's going on.

In response, thousands in France took to the streets in protest against what no just societies would tolerate.

An image published by France 24 showed a massive Saturday turnout in Paris.

One protester held up a sign saying: "PLEASE HELP UP TO STOP MACRON'S DICTATORSHIP."

Another was quoted, saying: "In no way does a president have the right to decide on my individual health."

One demonstrator compared Macron's mandates to the Nazi occupation.

Police confronted protesters with tear gas and other strong-arm tactics, how all tyrannical regimes operate.

PM Castex turned truth on its head, saying flu/covid jabs are the "only solution (sic)," falsely adding they "protect and will make us free (sic)."

French healthcare professionals and other staff have until September 15 to get jabbed or risk loss of employment.

Effective Sunday, border controls were hardened — no one allowed in the country from abroad unless fully jabbed.

According to parliamentarian François-Xavier Bellamy in a Le Figaro op-ed — a lawmaker France 24 called "a prominent young MEP for the conservative Les Republicains party, and Loic Herve, vice-president of the Senate's Centristes bloc:

"Opposing the health pass (is because) for the first time in our history, people will have to present a document in order to do the most simple, ordinary things."

Like the US, UK and other Western societies, France is no longer fit to live in or visit.

Another French revolution is the only solution.

The same applies to the US and other dystopian Western states.