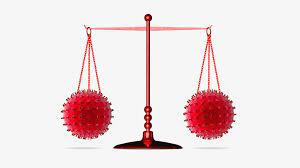 Sacrificing Health and Freedoms a Requirement for Employment?

Who could have imagined not long ago that health and freedom-destroying mandates would spread out-of-control throughout the West and elsewhere like a malignant tumor able to kill its host?

Who could have thought that the above would become the norm in one country after another with diabolical aims in mind?

Who ever could have expected that Western and other governments would become mortal enemies of their people beyond the worst of what went on earlier anywhere?

Will seniors lose public and private retirement benefits across the board?

Will they be labeled domestic terrorists and isolated from society, perhaps in internment camps under draconian conditions designed to punish and kill?

What was unimaginable not long ago is increasingly today's reality.

When sacrificing health and fundamental freedoms becomes a condition for employment and access to public places, Dante's hell arrived where the worst of draconian mandates are enforced.

Like in most of the US, EU, UK and Canada, Australia is profoundly unsafe and unfit to live in.

In Victoria state, Australia, toxic flu/covid jabs are mandated for workers across the board — refuseniks to be fired, most likely denied access to other employment and income.

One jab is required by October 15, a second one by November 26 — forever-jabbing sure to follow.

The more taken, the greater the irreversible harm to health — what's intended but not revealed publicly.

Victoria's draconian mandate covers everyone working outside their home, about 1.2 million people — virtually no one excluded beyond perhaps a scant few able to prove a hard to get medical exemption.

He defied reality by saying it's to "get the economy going again (sic)."

Pre-October, mandated jabs in Victoria only applied to healthcare, education, and construction workers, as well as for residents and staff in homes for the aged.

Now it applies to everyone employed outside their homes.

Will the draconian mandate spread like wildfire throughout Australia?

Is it coming to the US/West and elsewhere?

In Ontario, Canada, Provincial Parliament member Roman Baber introduced a Jobs & Jabs bill on October 5 to "prevent employers from firing or penalizing employees because of their (flu/covid jabbing) status."

"What's happening today with forcing employees to subject themselves to a medical procedure as a condition to putting food on their table — in my view is not just undignified, it's inhumane, he said, adding:

"Which is why we have to stand up against the mandates, and we have to save hundreds of thousands, if not more, Ontario jobs."

According to a September KPMG poll of over 500 small and medium-sized firms, 62% said they're considering or plan to make flu/covid jabs a requirement for employment.

Over 80% of respondents favor draconian health passports — without which access to public places will be greatly compromised or denied altogether.

At this time, provincial private businesses and venues are on their own on whether or not to mandate jabs for their staff.

In Ontario, flu/covid jabs are mandated for healthcare staff, educators, students and others in so-called high-risk institutions (sic).

Businesses and venues designated non-essential require proof of jabs for patrons to enter their facilities.

In response, he said the following:

Blocking the measure "sentenc(ed) potentially hundreds of thousands of people to unemployment," adding:

"I cannot convey the sadness that I'm feeling right now."

Blasting Ford's unacceptable action, he vowed to reintroduce the measure "in December to have second reading."

"I'm going to continue to fight for you," he stressed.

"I can't believe the injustice of forcing someone to make a choice between their health and putting food on the table."

Most outbreaks, hospitalizations and deaths are among jabbed individuals, especially ones double and booster-jabbed.

Natural immunity from having contracted and fully recovered from the viral illness protects best against reinfection.

Staying unjabbed is profoundly safer than going the other way.

Draconian flu/covid mandates in the US, West, Australia and elsewhere are all about pursuit of depopulation and social control no just societies would tolerate.

That's the disturbing reality of what's ongoing, conditions highly likely to worsen ahead, not improve.