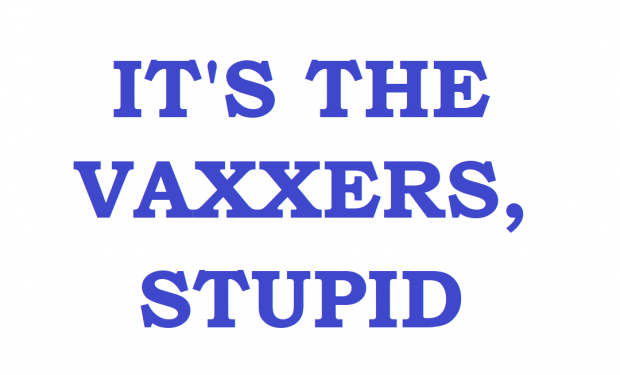 Indisputable evidence shows that a pandemic of the jabbed exists, not among refuseniks as falsely reported.

Shunning Pharma toxins helps protect and preserve health. The other way around weakens and destroys what's too precious to lose.

In increasing numbers of countries and local communities, the jabbed comprise up to 80% or more of the total.

It enables a virus to enter bodily organs and cells that causes health-destroying diseases.

Instead of protecting against pathogens, antibodies instead let foreign particles enter the body and weaken immunity.

According to an unreported Pfizer document hidden from public view — ignored by MSM — jabbed individuals "shed…spike protein particles" through bodily fluids, breath and skin, infecting others around them.

When unjabbed individuals without natural immunity come in close contact with their jabbed counterparts, they're vulnerable to infection from what they shed and spread.

Earlier he expressed "grave concerns about the lack of transparency of side effects, censoring of discussion, and lack of informed consent that these bring."

He explained that their hazardous "spike protein causes severe problems (including) bleeding disorders, blood clots throughout the body and heart problems."

They show up in individuals jabbed with the gene-altering technology.

Their lipid nanoparticles (LNPs) risk pathologic neuro-inflammation that can cause multiple sclerosis, ALS, cancer, heart disease and/or other serious diseases.

He explained how mass-jabbing coercion by US/Western and other governments is destroying the health of countless millions of people.

In cahoots with Pharma, their dark forces, anti-public health handmaidens and MSM co-conspirators are mass-deceiving their people about all things flu/covid — especially about toxic jabs.

They're "entic(ing)" them with incentives based on false promises, including in West Virginia, Malone explained.

"(T)hey had a shotgun lottery."

"(I)n Canada, there was a policy of offering free ice cream to children to get them to take the jab even without their parents' approval."

There have been numerous other examples of deceptively "unfair coercion" — illegal wherever used.

If jabs protect health as repeatedly claimed, why are incentives like million-dollar lotteries used?

Why are jabs administered free, why when payment was required for annual flu shots pre-2020?

Nothing about what's going on is related to "the common good," just the opposite, Malone stressed, adding:

Jabbed individuals are "super-spreaders" of health-destroying toxins to others.

The jabbed are "spreading the virus like crazy" by close contact with others, including to members of their own family.

There's nothing noble about what Malone called the "noble lie…paternalistic authoritarianism."

Some of the worst diabolical public health policies have gone on throughout the West and elsewhere for time immemorial.

The flu/covid mother of them all ongoing since last year was made-in-the-USA with diabolical aims in mind.