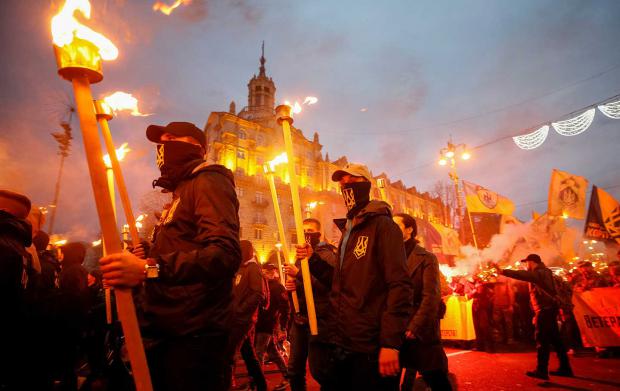 Years of "deep crisis" in the country followed.

It devastated the lives and welfare "of common Ukrainians, (around) 40% of whom are Russian-speaking."

For over seven years, Russian nationals in Ukraine "face(d) prosecution, violence or even death."

"Manifestations of neo-nazism and violent nationalism" grip the country.

Its people are terrorized by fanatics against "Ukrainians who do not share their extremist" views, along with others opposed to their criminality internally and against Donbass by US-orchestrated forever war.

Evidence abounds about "crimes and atrocities by the (US-installed) Ukrainian (regime) and ultra-nationalist far-right groups against the Russian-speaking population" and others for governance serving everyone in the country equitably.

They're indoctrinated them with "ultranationalist" hate-mongering views about all things Russia — encouraged by dominant US/Western right wing extremists.

Kiev's "official policy…is an insult to the memory of not only Russian and Ukrainian people, but all the peoples of the former Soviet Union."

"These soldiers gave their lives for the future of subsequent generations, including the citizens of present-day Ukraine."

After Zelensky was installed to continue serving US interests, hopes by ordinary Ukrainians who supported him were dashed.

Like his predecessor who was illegitimately installed by Obama/Biden, he continues to support "Ukrainian national-radicals, distorting the history of the Great Patriotic War, and glorifying Nazi collaborators."

Moscow should "wait until responsible leaders appear in Ukraine, (ones who support) equal rights and mutually beneficial relations with Russia, rather than (remaining) confrontation(al)" on orders from their US master.

There's nothing remotely democratic about fascist in Ukraine,  installed to serve US interests — including forever war in Europe's heartland along Russia's border.

US/EU Involvement in Arming and Training Ukrainian Troops for Warmaking

Abolition of Rights Affirmed by International and Constitutional Law