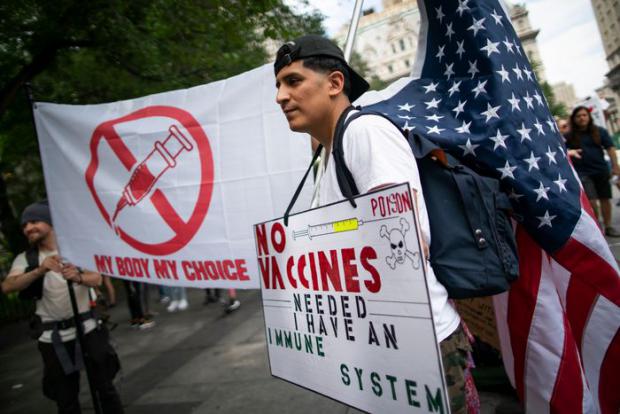 It's as simple as tens of millions in US/Western countries saying No, holding firm, staying the course, and not bending under pressure, threats or anything else.

Under international law, our bodies are inviolable. We alone are empowered to decide all things related to them.

The right of voluntary consent on all things related to the sovereignty of our bodies cannot be legally overridden by any authority.

Growing numbers of people in the US and other Western countries are awakening to the health-destroying harm from flu/covid jabs — designed for this purpose, not protection.

Former congressman Ron Paul is on the right side of this issue, last week saying the following:

"The incredible cruelty and folly of forced (jabs) finally came home to roost."

"(M)andat(ing)" them triggered a "backlash."

After bubbling under the surface, it's gone public.

Millions of Americans who refuse to self-inflict harm from toxic jabs "threaten to completely derail an already crumbling economy and to obliterate a deeply unpopular" Biden regime that's contemptuous of public health and the rule of law.

Cancellation of thousands of Southwest Airlines flights was unrelated to weather conditions as falsely reported.

It's all about hundreds of pilots, crew and other staff who refuse the harm their health as a condition of employment.

Will much the same happen at other airlines and transportation firms?

A great walkout in this vital industry can cause economic chaos as long as it continues.

The Southwest Airlines Pilots Association is suing the company over its illegal mass-jabbing mandate.

MSM mass deceive on all things flu/covid, including about the great Southwest Airlines walkout.

WaPo reported the same Big Lie, along with expressing concern about the risk of "a messy holiday season."

Ron Paul asked if pilots and crew of other airlines will follow the example set by their SW counterparts, adding:

"Rumors are circling that this is only the beginning."

Claims about safety and effectiveness of flu/covid jabs are refuted by science.

Yet the NYT and other MSM repeat the mass deception with disturbing regularity, including the whopper about Pfizer's jab for children aged 5 - 11, saying:

The company affirms it "to be safe and effective in low doses" when administered to young kids.

Earlier polls showed a majority of US parents opposed to jabs for offspring under age-12.

Likely still the case, a suspect Gallup poll last week suggested that slightly more than half of surveyed parents will get their young kids jabbed, a marginally smaller percent of the sample group to abstain.

Within the margin of error, results were about evenly split for and against what no responsible parents should permit for their children or themselves.

Other polls show over 60% of respondents opposed to jabbing their kids because of the high risk involved.

Reasons cited include potential adverse side effects, distrust of government and Pharma claims, as well as inadequate testing.

According to a Kaiser Family Foundation poll, only about one-third of US parents intend to get their young kids jabbed.

Fraudster Fauci is worried, falsely claiming that many unjabbed children are "seriously ill" enough to require hospitalization, one of his many bald-faced Big Lies.

Schools that mandate jabs for young children may get large numbers of parents to shift them elsewhere for protection against what everyone should shun.

Job boards are being formed against firms that require their employees to be jabbed.

One hosted by the Gab social media platform said the following:

"This job board is for sharing job openings that do not require employees to inject themselves with an experimental substance or violate their bodily autonomy and religious beliefs in order to retain employment."

Another site called No Vax Mandate.org said "no right is more sacred than the right of every individual to the control of their own person, free from all restraint or interference of others."

One called Red Balloon calls itself "the nation's first and only free speech job site (that's) taking a stand against forced" jabs.

It intends to seek out and connect with firms that have job openings for workers based solely on their qualifications — "regardless of their (jabbing) status."

The power of resistance is unstoppable when enough committed people refuse to go along with what no free and open society would tolerate.

Are things moving in this direction?

While way too early to tell, signs like the above are encouraging.

The fullness of time will explain in hindsight whether resistance will emerge triumphant over the diabolical scheme US/Western dark forces rolled out last year after years of secret planning planning and test runs.

Doctors on the Right Side of History and Medical Ethics