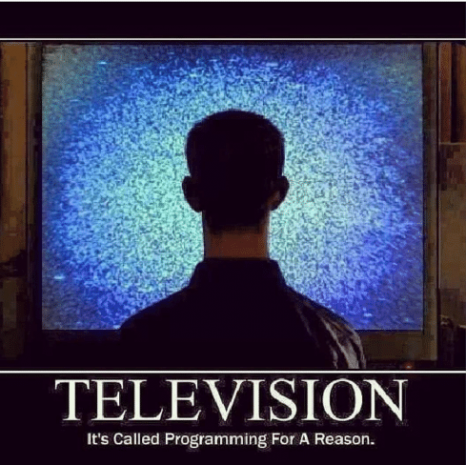 To prove his point, he suggested watching it throughout a given day with no distractions.

"Keep your eyes glued to that set until the station signs off" as television operated before 24-hour broadcasting.

"And if you think I exaggerate...try it," said Newton.

As mediocre to awful that television was in its early years, today it has everything to sell round-the-clock, nothing to tell, and what passes for news, information and views is all state-approved propaganda all the time.

The ritual of Sunday talk shows is a prime example.

They're platforms for US criminal class members to lie, mass deceive, mind-manipulate and brainwash viewers to believe what harms them is beneficial.

Their pure evil agenda is featured on an array of Sunday talk shows.

Truth and full disclosure on vital issues throughout television's "vast wasteland" is banned — notably on shows with mass deception agendas as on US Sunday morning television.

Like countless times before seasonal flu was renamed covid, angle of death fraudsters Fauci and Walensky showed up again on Sunday to fill the minds of viewers with state-approved mush.

The name of his game is inflicting maximum harm on maximum numbers of people from toxic kill shots.

Authorized for use by the Pharma-controlled FDA and CDC, they cause irreversible harm when taken as directed.

Like countless times before, Fauci lied by calling them safe and effective.

He pushed mixing and matching different brands that cause greater harm by combing toxins.

Saying "it's perfectly fine" to be jabbed this way defied science.

Pushing boosters that cause greater harm than double-jabbing, he lied claiming they'll "increase and optimize…protection (sic)."

He wants 28 million US children aged-5 to 11 irreversibly harmed the same way.

Destruction of their health will likely begin in early November after the Pharma-controlled FDA and CDC rubber-stamp approval of jabbing toxins into their underdeveloped bodies.

Fauci expects what's planned to begin in "the first week or two of November."

It's essential for parents wanting the health of their children protected and preserved to just SAY NO!

Fraudster Fauci is an unindicted member of Washington's criminal class.

A longstanding serial liar, virtually everything he promotes is with harming health, along with serving the interests of Pharma and himself.

She came on to push toxic jabs for young children aged-5 to 11.

A serial liar, nothing she says is credible. Virtually everything she pushes is with destroying health in mind.

She lied saying it's OK to mix and match (toxins from one jab) with another brand.

She lied about jabbing young children, concealing that it's all about destroying their health on the phony pretext of protecting them.

Everything she touts about jabs is with this diabolical aim in mind — polar opposite what medicine is supposed to be all about.

She wants "children (to) start rolling up their sleeves" like others — with irreversibly harming them in mind, she left unexplained.

The same goes for concealing that the vast majority of flu/covid outbreaks, hospitalizations, patients in ICU and deaths were among toxic-jabbed individuals.

Claiming she "follow(s) science" is polar opposite how she, Fauci and other US anti-public health officials operate.

They in cahoots with other US dark forces, Pharma and MSM press agents are responsible for pushing mass-extermination of unwanted people worldwide on the phony pretext of protecting them.

Doctors on the Right Side of History and Medical Ethics

Pandemic of the Unjabbed?