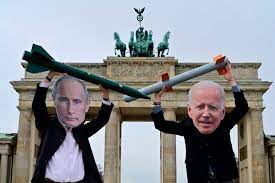 Biden Regime Pushing Things for Conflict with Russia and Belarus

The Biden regime is an unparalleled global menace.

It's a mortal enemy of everyone yearning to breathe free at home and worldwide.

Stoking potential conflict against invented enemies, it risks igniting it against Russia, China, Iran and other nations.

The Belarusian border with Poland is one of many US-dominated NATO-created hot spots.

Last week, interventionist Blinken's spokesman Price made hostile remarks about Belarus that were scripted for him to recite.

Ignoring reality, he slammed Belarusian President Lukashenko for what he had nothing to do with, saying:

The Biden regime "condemns (him for the made-in-the USA-dominated NATO's) political exploitation and coercion of vulnerable people, and…callous and inhumane facilitation of irregular migration flows across" the Belarusian border with Poland.

On Saturday, Lukashenko said US-dominated NATO never forgave him for surviving its diabolical regime change plot to replace him with a pro-Western puppet.

"Of course, they will not forgive me for that. They failed to overthrow (me) and destroy Belarus," he stressed.

If successful last year, "(e)verything was ready. NATO troops, Americans and others" were ready to move in and take over control of the country.

On Friday in response to a closed door Security Council session on the migrant situation along the Belarusian/Polish border, press secretary for the Belarusian Ministry of Foreign Affairs Anatoly Glaz slammed the meeting, saying:

"(T)he purpose of this orchestrated event was to create another media opportunity to make groundless accusations against Belarus," adding:

"This is an old Goebbels propaganda technique."

"(T)oday we are spectators in the theater of the absurd."

EU "member states, the most powerful NATO bloc — (in cahoots with hegemon USA) — are trying to play cheap (theatric tricks by) saying that a relatively small and absolutely tolerant Belarus is a threat to peace and an aggressor."

"For obvious reasons, they are trying to distort and hush up the obvious fact, namely the root cause of the global migrant crisis, which was caused by the illegal interference of Western countries in the internal affairs of other countries, military interventions and the destruction of a number of states."

"Belarus in this situation is only a transit country, which, by the way, bears significant costs."

Glaz also explained that in 2020 alone, half a million or more refugees from nations raped and destroyed by US-dominated NATO were settled in EU countries without a Western propaganda blitzkrieg against invented enemies.

It's "absolutely clear (that) tension(s) on the border between Belarus and the European Union (are) not so much about problems that three thousand migrants can create, but about Poland, Lithuania and Latvia who stand to benefit by inflating the crisis" — hegemon USA most of all if its diabolical plot succeeds.

"Minsk is ready (for whatever) retaliatory measures" US-dominated NATO may have in mind.

Russia has "nothing to do with" what's happening there.

"(T)he migrants' goal is primarily to get into Germany."

"We should not forget the roots of these migration crises."

"Was it Belarus that unleashed these problems?"

"No, the problems were caused by the West, by the (US and) European countries."

"These problems have political, military and economic dimensions."

"Military because" of forever US/NATO wars on invented enemies — especially from the dissolution and rape of the former Yugoslavia to preemptive post-9/11 aggression against Afghanistan, Iraq, Libya, Syria, Somalia and elsewhere.

"Belarus ha(d) nothing to do with" US/NATO aggression.

Migrants displaced from war theaters "are moving via different routes."

It's "not surprising that they are now going through Belarus because, as Mr Lukashenko told me, Belarus has visa-free arrangements with the countries of origin."

"(T)here are also economic factors. There are very high social benefits for migrants in Europe."

Workers in the Middle East, parts of central Europe and North Africa "earn a fraction" of pay and benefits their EU counterparts get.

"Why should they work in turbulent conditions when basic safety rules are not observed when they can… get twice or three times as much" in the EU?

"(W)e kept hearing that humanitarian issues must be given top priority."

"However, when Polish border guards and army troops on the Belarus-Poland border beat up potential migrants and fire combat weapons over their heads, blast sirens and spotlights onto their camps at night, where there are children and women in the final weeks of pregnancy, all that does not go well with the ideas of humanism which supposedly underlie all policies of our Western neighbors."

"I want everyone to know this."

"We have absolutely nothing to do with any of this."

"They are trying to shift the responsibility to us at the slightest pretext or even without any pretext."

"Our airlines do not carry those people. Not a single one of our airlines is involved."

"President Lukashenko told me that Belavia Airlines does not carry migrants either."

"They take charter flights, and with a visa-free arrangement these people just buy their tickets and come over."

"(T)here are certain groups that are shipping those people to the European countries, but those groups have been operating for a long time."

It's the responsibility of US/Western regimes to deal with and resolve crisis conditions they created — not Russia or Belarus that had no involvement in decades of their aggression.

Time and again, hegemon USA and its subservient partners falsely blame Russia and other invented enemies for their own high crimes of war, against humanity and other criminality.

It reflects how the scourge of US/NATO imperialism operates.