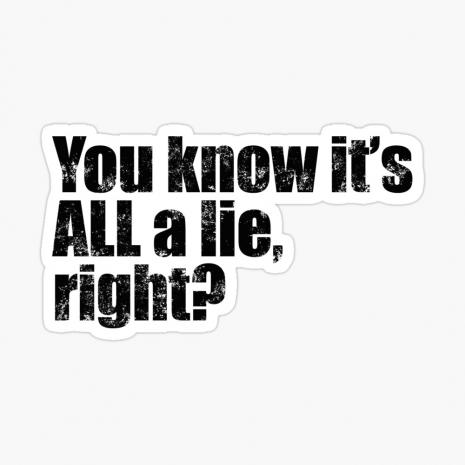 Everything — repeat everything — officially claimed about all things flu/covid and fed MSM followers is false and misleading with the worst of diabolical aims in mind.

US/Western hospitals and most doctors were pressured, intimidated  and/or bribed to go along with plans for mass-extermination and obliterating what remains of freedoms too precious to lose.

US medical boards threatened refusenik doctors with de-licensing if failed to toe the mark.

Hospitals, other healthcare facilities, and academic institutions suspended or sacked medical, scientific, and other professionals for prioritizing truth and full disclosure on the most crucial issue of all time, along with doing no harm.

Since seasonal flu/influenza got a scary new name — what's shown up annually for time immemorial with no fear-mongering-produced mass-hysteria hyperventilating — US/Western and other populations have been brainwashed to believe what destroys health and freedom is beneficial.

It's causing large numbers of deaths straightaway. Most often, it takes a little longer.

Everyone — repeat everyone — jabbed is irreparably harmed.

Hundreds of thousands are already dead.

Millions in the US/West and elsewhere are suffering from serious illnesses and or disability from toxins jabbed into their bodies.

All of the above is largely unreported.

When jabbed individuals contract heart disease, cancer, diabetes and/or other life-threatening diseases, are harmed by disabling strokes, potentially lethal blot clots, deafness, blindness, sepsis, irreversible neurological damage, and/or other serious adverse events — none of the above is reported by US/Western/Israeli regimes or their MSM press agents.

What little comes out from US/Western anti-public health agencies — a tiny fraction of far greater harm to millions — is ignored in the mainstream to keep brainwashed populations unaware of widespread catastrophic harm from jabs designed with this in mind.

"No passion so effectually robs the mind of all its powers of acting and reasoning as fear," Edmund Burke observed.

Orwell stressed  that "(p)olitical language…is designed to make lies sound truthful and murder respectable, and to give an appearance of solidity to pure wind."

When the mother of all health-destroying scams needs a booster shot, US/Western dark forces roll out a new scariant.

When the more scariant than variant delta showed up in the US/West early last summer, its arrival was all about pushing for more extensive toxic mass-jabbing than already.

The same goes for the omicron scariant.

Its rollout came at a time when jabbing and rejabbing slowed at the onset of cold weather months.

Like delta, its aim is getting more people to self-inflict harm from kill shots designed for this purpose.

As earlier articles explained, all flu/covid strains are virtually alike, none more harmful or scary than others.

Claims otherwise by official and MSM sources are bald-faced Big Lies in pursuit of their diabolical health and freedom-destroying aims.

As planned in advanced — notably after delta's rollout and now omicron — MSM-proliferated propaganda was unleashed to promote greater toxic mass-jabbing — along with brainwashing the public more than already to accept further draconian freedom-destroying restrictions if and when imposed.

As usual, the lying machine NYT is in the vanguard of spreading fear-mongering mass deception.

Omicron is beginning to spread (sic). It's likely in NYC and state (sic).

"There certainly is a chance that it has already spread globally (sic)."

Cutting to the chase of his aim to benefit Pharma profiteers, likely himself as well, he added the following:

Without robust (toxic) mass-jabbing, "we are half-treating the pandemic" that exists among the jabbed alone, he left unexplained.

The more kill shots administered, the faster destruction of public health and freedom can be accomplished.

It shows that as mass-jabbing increases, so do excess adverse events and fatalities.

Saying he's not surprised, he added:

Flu/covid jabs "are the deadliest (ones) in human history by a factor or over 800."

On Saturday, Health Impact News (HIN) explained that the omicron "scam was simulated in Israel weeks before it was" rolled out in southern Africa.

It's like the ongoing one in higher gear to accelerate destruction of public health and freedom worldwide.

Expect a rollout of new Pharma kill shots to follow.

HIN minced no words, calling so-called "variants (a) scam as SARS-CoV-2 (that doesn't exist) is a scam."

"There is no such thing as an alpha, or beta, or gamma delta variant."

"This is a means by which what is desperately sought is a degree to which individuals can be coerced into accepting something that they would not otherwise accept."

"There has not been in any of the published studies in what has been reportedly the delta variant."

What's been reported is based on "computer simulations."

There has been no ability to identify any clinically altered gene sequence, which then has a clinically expressed variation."

"(T)his is the problem all along."

"This is the problem going back to very beginning of what's alleged to be a pandemic."

"(W)e do not have any evidence that the gene sequence alteration had any clinical significance whatsoever."

"There has not been a single paper, published by anyone, that has actually established that anything novel since November of 2019 has clinical distinction from anything that predates November of 2019."

"The problem with the 73 patents that I described, is that those 73 patents all contain what was reported to be novel in December and January of 2019 and 2020 respectively."

"So the problem is that even if we were to accept that there are idiopathic pneumonias, even if we were to accept that are are some set of pathogen induced symptoms, we do not have a single piece of published evidence that tells us that anything about the subclades Sars-CoV-2 has clinical distinction from anything that was known and published prior to November 2019 in 73 patents dating to 2008."

"There is no, and I am going to repeat this."

"There is no evidence that the (so-called) delta variant is somehow distinct from anything else GISAID."

"I could come up with variant 'omega.' and I could say I'm looking for this sub strand of either DNA or RNA, or even a protein, and I could run around the world going 'Oh my gosh! Fear the omega variant!' "

"(T)he problem is, that because of the nature of the way in which we currently sequence genomes, which is actually a compositing process, is what we call in mathematics an 'inter-leaving.' "

"We don't have any point of reference (to) actually know whether or not the thing we are looking at is in fact distinct from either clinical or even genomic sense."

"(S)o we're trapped in a world where unfortunately, if you go and look, as I have, at the papers that isolated delta, and actually ask the question, is (it) anything other than the selection of a sequence in a systematic shift of an already disclosed other sequence, the answer is, it's just an alteration in when you start and stop what you call the reading frame."

What's true about delta and other reported flu/covid strains applies to the more scariant than variant omicron.

Plain and simple, its rollout is the latest chapter in the ongoing mother of all scams — with more of the same virtually sure to follow.

If more people did minimal due diligence from independent sources and shunned MSM propaganda, the ongoing scam could have been rendered stillborn.

Focusing on mind-numbing bread and circuses instead, US/Western dark forces and accomplices have had things their way.

Beating the bastards depends on awakening to reality.

It requires refusal to go along with their health and freedom-destroying scam any longer.

It's our only chance to defeat the most diabolical plot ever rolled out by history's most ruthless tyrants.