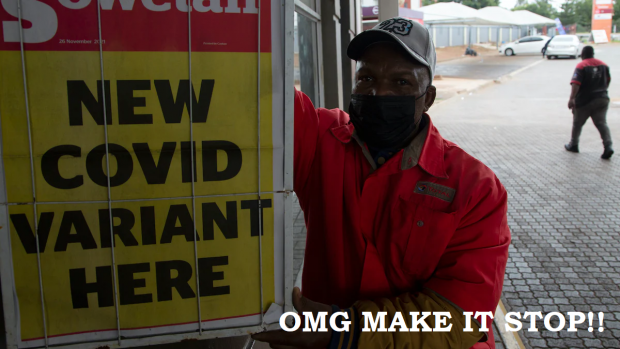 Omicron is the sequel to the delta hoax.

It was rolled out to inject new life into the mother of all health and freedom-destroying scams.

The Pharma-controlled WHO defied science and the rule of law by falsely calling the more scariant than variant omicron "very high" risk (sic)."

All the MSM huffing and puffing hyperventilating since late last week is built on a foundation of fake news mass deception.

Not a shred of scientific evidence exists to justify anything related to flu/covid mandates and restrictions — especially about jabs that harm and don't protect when taken as directed.

Medical tyranny is increasingly the law of the land throughout the US/West and elsewhere — in defiance of the rule of law.

Travel restrictions, border closures and other draconian steps taken have nothing to do with protecting health.

They're all about destroying freedom.

Nearly two years after the mother of all scams was rolled out, excuses no longer exist for everyone connected online not to understand enough about what draconian mandates and restrictions are all about.

The same goes for how MSM weapons of mass deception operate.

Nothing they report on major issues can be taken at face value.

Saying Pfizer and Moderna are "preparing to reformulate their (kill) shots if necessary" for the more scariant than variant omicron, indicates what's coming — forever-jabbing for accelerated health destruction and maximum Pharma profits.

The Times also supports greater unconstitutional intrusions into our lives by "strengthen(ing) surveillance and field investigations, including community testing" and tracing — perhaps making all of the above mandatory in breach of multiple constitutional amendments.

(Meaningless) "testing and (draconian) tracing remain fundamental to managing this pandemic" — that exists for the jabbed alone, she left unexplained.

Representatives from WHO member states are meeting to decide on more draconian steps to take.

Make no mistake. They're coming to more greatly destroy health and freedom than already.

In short order, dozens of Western and other countries imposed travel restrictions to push greater destruction of public health and freedom than already.

"I expect the new normal to be everyone ends up getting (jabbed) with a booster shot" to accelerate mass-extermination, he left unexplained.

"We have the best (health-destroying jabs) in the world, the best (toxic) medicines, the best (Pharma-linked) scientists…"

There's no ambiguity about what diabolical US/Western dark forces have in mind.

MAN ALIVE! My penis SHRANK more than an inch 'due to damage from Covid'...