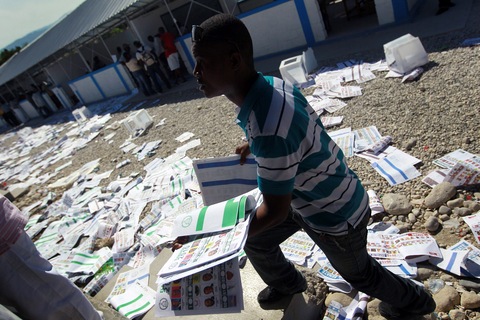 Recounting will be secretive behind closed doors. No public statement will be made until final results are announced, likely early in January. Team members will "look at all systems and then....agree on how (to) proceed" instead of trashing junk tally sheets and starting over.

Originally scheduled for January 16, second electoral round voting will be delayed until initial totals are recounted and verified, no matter how fraudulent, ludicrous, and worthless.

Brazenly ignoring illegitimacy, it said "Re-running elections this large (for president and legislative members) would lead to months more confusion and government inaction. Unless compelling evidence of fraud is found, it is not necessary and clearly not in Haiti's interests."

On December 30, a new Times editorial titled "Haiti's Vote" endorsed OAS recounting, not to determine fraud, but to "clear up the uncertainty over who won second place and will go on to a January runoff." Once again The Times said:

"The answer is not a full, new election. That would be hugely complicated and costly. Haiti and the OAS have the right approach with their agreement to let the outside specialists into the national tabulation center to examine everything: tally sheets, voter rolls, written reports about irregularities and incidents on Election Day....so Haitians see that their democracy is lawful, transparent and trustworthy."

In February 2004, Haitians, of course, lost democracy after US Marines forcibly ousted Aristide. Under Washington's iron heel, they've been denied it since, the November 28 sham the latest example of coup d'etat authority substituting for constitutional legitimacy. Allowing recounted fraud institutionalizes it, putting fair and open elections further out of reach. According to Times-think, Haitians don't deserve democracy, what they've been denied except under Aristide.

After his 2004 removal, a Times editorial lied, saying:

-- sending in Marines "was the right thing to do;"

-- they only arrived after "Mr. Aristide yielded power;"

-- he was to blame for "contribut(ing) significantly to his own downfall (because of his) increasingly autocratic and lawless rule....;" and

-- he manipulated the 2000 elections and didn't "deliver the democracy he promised."

In fact, in 1990, he won overwhelmingly with 67% of the vote, was ousted by a US-sponsored coup eight months later, returned to Haiti in 1994, couldn't succeed himself in 1996, but ran in 2000, again winning an overwhelming endorsement with a 92% majority, a total he'd easily match today if able to run. Though he no longer has electoral aspirations, Washington won't let him return, enforcing no-democracy for Haitians, the same domestic policy for Americans under institutionalized duopoly rule.

On December 30, CEPR released its analysis showing "massive irregularities and errors in the tally." According to Co-Director Mark Weisbrot:

"With so many irregularities, errors, and fraudulent vote totals, it is impossible to say what the results of this election really are." It's clear a new election is crucial, a legitimate one that Haitians are denied. "If the (OAS) certifies this election, this would be a political decision, having nothing to do with election monitoring. They would lose all credibility as a neutral election-monitoring organization."

CEPR's analysis found that Haiti's Provisional Electoral Council (CEP) never received or quarantined 11.9% (1,324) of tally sheets because of irregularities. They amounted to 15% of the total votes counted. Moreover, another 6.4% of tally sheets had irregularities. They "contained vote counts that were so far outside the distribution of votes that they would not be considered valid."

Combined with the uncounted 11.9%, they exceed 18% of tally sheets or 22% of votes counted, in fact, invalidated. Widespread clerical errors were also found, including 5.4% of tally sheets with obviously incorrect numbers.

"It is clear that with so many mistakes in recorded totals in the tally sheets, there would have to be errors in the candidate vote counts in addition to those that CEPR detected."

Moreover, turnout was very low, an estimated 22.3% compared to 59.3% in 2006, the last presidential election. Excluding 15 political parties, including by far the most popular, Aristide's Fanmi Lavalas, largely explained why. Also important was the number of internally displaced people (IDPs), made homeless by Haiti's earthquake, and in many cases willfully disenfranchised. In Port-au-Prince, Carrefour, Delmas and Petionville (with 20% of registered voters), average participation was 12.4% ("11.25 percent," excluding irregular tally sheets).

"This election was of questionable legitimacy to begin with because the electoral authorities banned over a dozen political parties, including the country's most popular (one). But with this massive level of irregularity, fraud, and disenfranchisement, it can hardly be considered" legitimate.

Clearly, it fails the smell test, an aroma New York Times editorials don't detect. Instead, they endorse coup d'etat illegitimacy, their usual support for wealth and privilege over popular interests like democracy. Americans are denied it like Haitians.

Official infection figures number 150,000, but true totals are likely four times that amount, perhaps heading toward or surpassing one million or over 10% of the population. On June 28, 2010, the US Census Bureau estimated Haiti's population at 9.6 million and America's at over 310 million. Thus, a comparable US infection rate would be over 31 million, an epidemic of biblical proportions.

In contrast, major media sources ignore Haiti's crisis, a nation out of sight and mind to US news consumers the way other important issues are sanitized, distorted or suppressed. It leaves Americans the most over-entertained, under-informed people anywhere, even about their own country.

Ricardo Seitenfus, author of "Haiti: Sovereignty of the Dictators," was Special (OAS Haiti) Representative of the Secretary General until fired in late December for speaking truth. In an interview with the Swiss journal "Le Temps," he gave an incisively frank assessment of conditions on the ground in response to questions posed.

He explained that UN Blue Helmets "transform(ed) the Haitians into prisoners on their own island." That for over two centuries, "foreign troops....alternated with dictators....Haiti's original sin (was) liberation" in 1804. Washington denied recognition until 1865, fearing its own slave population would demand freedom and citizenship like Haitians and other Americans. For its part, France demanded ransom paid for liberation. "Right from the beginning, independence was compromised and the country's development was road-blocked."

Nothing thereafter was solved. Today it's worse with Haiti turned "into a capitalist country, an export platform for the American market, it is absurd" and deeply exploitive. "More than 90% of the education and health systems are in private hands. The country has no public resources for the functioning of an official system even in a minimal fashion....When the unemployment (underemployment) rate is at 80%, deploying a stabilizing mission is intolerable. There is nothing to stabilize....Its mandate in Haiti is to keep peace of the cemetery."

Predatory NGOs make it worse, exploiting vulnerable Haitians for profit. "There is an evil or perverse relationship between the NGOs' strength and the Haitian State's weakness. Some NGOs exists only because of the Haitian misfortune," yet do little to relieve it. A few other comments included:

-- it's "unacceptable from the moral point of view to (use) Haiti as a laboratory;"

-- "Haiti is ground zero of humanity's tragedy and the failings of its international solidarity;"

-- its November 28 elections were disastrous, a sham, by "any measure....a violation of the democratic will of the Haitian people;" and

-- "Two hundred years ago, Haiti illuminated the history of mankind and of human rights. Now it is necessary that we give the Haitians a chance to confirm their vision."

Sadly, Washington's iron fist denies it; using Haiti as a colony for profit; its people easy prey to exploit; its history, cultural traditions, and creativeness kept out of sight and mind. No wonder Seitenfus said America and European countries are "colonialist, racist, and a world of slavery that based (their) richness on the exploitation of third world countries." No wonder saying it got him fired.

Sounds like every election I have ever been involved with only without the optical counters.