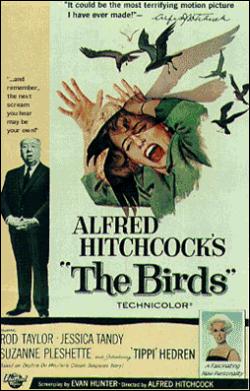 The Birds
5,000 Birds Drop Out of The Sky – Happy New Year!
(Satire) So, 5,000 birds dropped dead on New Year’s Eve in Arkansas. 100,000 fish went belly up in Arkansas too. Not to worry the media says it was because of fireworks! Guess all the other birds nationwide have “fireworks immunity”.
Many years ago Rachel Carson wrote a book called “Silent Spring”. It was about waking up one day with all the birds gone. Well, the canary in the coalmine is speaking or should I say tweeting. We have lost 50% of the bee population in America and now the bats, but not to worry according to the media.
Einstein said without bees human would be dead in four years. Maybe the “christians” predicting the end of the world on May 21 (mark your calendar) are for the birds, maybe they aren’t. In Hitchcock’s movie “The Birds Are Coming” we were all afraid of birds attacking us. Today we need to be afraid that the birds are warning us.
As humans continue to destroy their own habitat and web of life through greed, ignorance and hatred of the natural world we can only figure it’s a matter of time before the two-legged animal, human, starts dropping too. We either learn to live in a sacred manner or die.
My belief is that this could be (not in any particular order):
HAARP gone wild
Chemtrails amped up
Monsanto poison seeds, weeds and pesticides
Some other exotic weapon tested over Arkansas. You may say I’m paranoid, but just because you’re paranoid doesn’t mean they aren’t watching you!
Keep your eyes on the skies my friends this is going to be an interesting year. If you’re a person who wants to be “in the know” subscribe while you still can and learn what you need to know to survive.