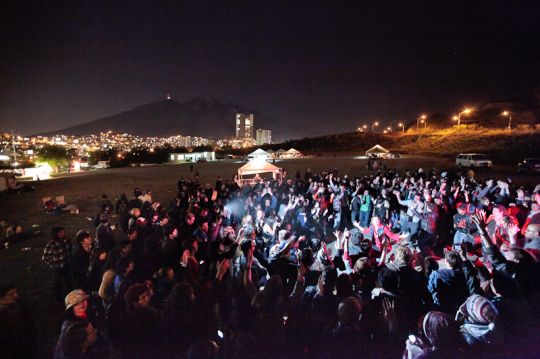 From inception, most Guantanamo detainees were uncharged. On January 5, the Center for Constitutional Rights (CCR) said:

"....the vast majority of the men at Guantanamo should never have been detained in the first place, and that over 550 have been released and are peacefully rebuilding their lives." Most of the 800 captured and brought there were lawlessly "seized in broad sweeps and sold to the US (for) substantial bounties." From the Pentagon's own records, "most (have) no link to terrorism."

For over seven years, CCR "organiz(ed) and coordinat(ed) more than 500 pro bono lawyers across the country" to represent detainees, and helped to resettle about 60 others still at Guantanamo "because they cannot return to their country of origin for fear of persecution and torture."

Obama promised to close Guantanamo, yet nothing followed up to assure it. Moreover, early in 2011, an Executive Order (EO) will authorize indefinite detentions for longstanding uncharged detainees the administration won't release.

Guantanamo and other US torture prisons are blights on democratic values and fundamental international law that prohibits all forms of torture and abuse at all times with no allowed exceptions.

Yet closure for none are planned, including Guantanamo, symbolically representing the worst kind of cruel and unusual punishment. It's prohibited under international and US law, including the Constitution's Supremacy Clause (Article VI, clause 2), designating federal statutes and treaties automatically "the supreme law of the land," including international laws to which America is a signatory. Nonetheless, Washington systematically violates them.

Indefinitely detaining innocent prisoners (wrongfully called too dangerous to release) exacerbates injustice, a CCR statement saying the Obama administration may also try doing it in America. If so:

-- "it will be difficult to hold the line at the 48 men at Guantanamo. (Obama's) proposal (would lay) the groundwork for US prisons to become places where people from around the world are brought and imprisoned without charge (or) trial, eroding our Constitution and adherence to international law beyond recognition."

In fact, that standard long ago was violated, making the rule of law in America a mere figure of speech. A new Seton Hall University School of Law's Center for Policy and Research (CP&R) affirms it, titled:

"Drug Abuse: An Exploration of the Government Use of Mefloquine at Guantanamo."

Under Professor Mark Denbeaux's direction, CP&R published 17 "GTMO Reports," including the latest, discussed below, "documenting the medically inappropriate use of a dangerous pharmacological treatment on" detainees.

Yet prison authorities administer it freely, at five times the normal dose. Even a fifth that much can cause any or all of the above side effects. Without medical need, pumping it into detainees in excessive amounts may cause irreparable harm. "At best it represents (gross malpractice and) monumental incompetence. At worst, it's torture."

Guantanamo has no malaria nor does Cuba. As a result, drug usage is solely to "specifically (induce) adverse side effects, either as part of enhanced interrogation techniques, experimentation in behavioral modification, or torture for some other purpose."

Doing so, however, violates Nuremberg protections that require voluntary consent with full disclosure of known risks and avoidance of experimental treatments if there's reason to believe harm may result. In addition, the Fifth Amendment protects against abusive government authority in stating "No person shall....be deprived of life, liberty or property, with due process of law...."

Moreover, the Eighth Amendment prohibits "cruel and unusual punishments." Involuntarily administering dangerous drugs is a serious criminal offense. Yet at Guantanamo, "the US military routinely administered doses of mefloquine to detainees" on arrival "without medical justification" and no regard for their well-being.

Prophylactic adult dosage is 250 mg once a week. Administering 1,250 mg (to malaria free detainees) is indicated for mild to moderate malaria. Mefloquine is inappropriate in treating severe malaria cases, disease not caused by P. vivax or mefloquine-susceptible P. falciparum strains, or patients who previously used the drug.

Moreover, the higher the dose, the severer the side effects, yet "(v)ery few medical records have ever been released for GTMO detainees, and those (available) are heavily redacted and may be incomplete" to conceal the true harm done. Available documents, however, reveal over-dosing with very likely severe, long-lasting neuropsychological side effects.

GTMO Medical "Infection Control" SOP 021 states 1,250 mg of mefloquine will be included in "empiric therapies." Medically it refers to administering treatment prior to a firm diagnosis, but doing it routinely in high doses is criminal malfeasance. Omitting medical evaluation, compounds the offense.

"Despite professional medical/health organizations denouncing the use of mefloquine for empiric treatment, (Pentagon authorities) mandated that detainees receive a full (1,250 mg dose) upon arrival."

"According to the Centers for Disease Control and Prevention (CDC), there is no malaria in Cuba," and it doesn't threaten Guantanamo, according to an official memorandum on the "Department of Defense Operation Use of Mefloquine." Moreover, the Pentagon understands its effects, doesn't administer it to US GTMO personnel, and is aware of 1950s quinolines experimentation as part of the CIA's MKULTRA, its mind control program, addressed in an earlier article accessed through the following link:

Begun in 1953, it was to perfect a truth drug for interrogating suspected Soviet spies. It aimed to control human behavior through psychedelic and hallucinogenic drugs, electroshock, radiation, graphology, paramilitary techniques, and psychological/sociological/anthropological methods, among others - a vast open-field of mind experimentation to find whatever worked, legal or otherwise on willing and unwitting subjects. Some were so gravely affected, they never recovered.

"Whoever outside the United States commits or attempts to commit torture shall be fined under this title or imprisoned not more than 20 years, or both, and if death results to any person from conduct prohibited by this subsection, shall be punished by death or imprisoned for any term of years or for life."

Torture, genocide, slavery, and wars of aggression have a common thread. They're all jus cogens, meaning subject to a higher or compelling law. As a result, no country can pass laws permitting these practices in any form for any purpose with no allowed exceptions. For decades, however, America has used them freely, so far with impunity.

Regarding mefloquine's use, Dr. G. Richard Olds, an internationally respected tropical disease expert and Founding Dean of the University of California at Riverside School of Medicine explained that:

It's "fat soluble and as a result it does build up in the body and has a very long half-life. This is important since a massive dose (isn't) easily corrected and the 'side effects'....could last for weeks or months....In my professional opinion, there is no medical justification for giving (high doses) to an asymptomatic individual. I also do not see the medical benefit of treating a person in Cuba" with a clearly unneeded drug.

According to Professor Stephen Soldz, Director of the Center for Research, Evaluation, and Program Development, Boston Graduate School of Psychoanalysis and President of Psychologists for Social Responsibility:

"For years there has been an almost complete lack of transparency regarding medical practices and procedures at Guantanamo (and all other US torture prisons). The military has failed to provide credible explanations for its procedures. Detainees and their attorneys have been denied access to their own medical records, an egregious ethical violation. All health providers should join the call for Guantanamo to respect fundamental rules regulating medical ethics everywhere."

Failure to do so under international and US law is illegal. Without full access to all detainees' medical records, the Pentagon is criminally liable, "and the potentially serious (harm to) those who received the drug will remain hidden."