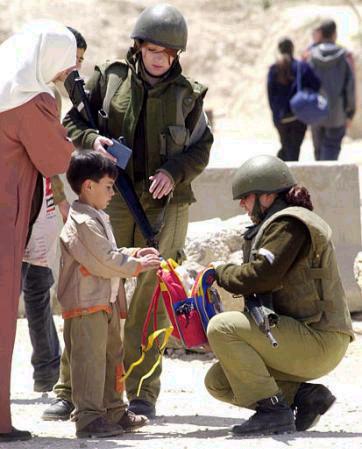 Daily accounts can be followed on important sites such as Palestine Chronicle.com, Palestine Telegraph.com, and the Electronic Intifada.net as well as others like Israel's oldest daily newspaper, Haaretz, available online in English.

"Israeli soldiers shot and killed an unarmed 65-year-old Palestinian man....in what appeared to be a case of mistaken identity. The man's wife said he was sleeping and she was praying when soldiers burst into the apartment before dawn, entered the bedroom and immediately opened fire."

Without explanation, "(t)he Israeli military expressed regret," she said, and promised "a speedy investigation, with conclusions to be presented as early as next week." In fact, all Israeli "investigations" whitewash crimes to absolve guilty commanders, troops, and top government officials who sanction occupation, violence and wars of aggression.

Rarely ever do US media journalists report anything less than fully supportive of Israel. Even Kershner's account wasn't fully accurate or candid, suggesting "mistaken identity" when killings, assaults and other abuses happen regularly against targeted individuals and others who happen to be in the wrong place at the wrong time - "collateral damage" for the Pentagon and Israel when, in fact, it's willful, at times, indiscriminate cold-blooded murder, a US and Israeli specialty.

Kershner's article also misreported "a period of relative calm" preceding the killing and two others when, in fact, daily violence and repression define life in Occupied Palestine. It also mentioned what she covered in a January 1 article, headlined, "Tear Gas Kills a Palestinian Protester," saying:

Again, she highlighted Israel's side, calling the protest a "violent and illegal riot,'" when, in fact, demonstrations against occupation and Israel's (International Court of Justice July 4, 2004 ruled illegal) Separation Wall are always nonviolent and legal on Palestinian, not Israeli, land. Israeli-initiated violence always follows, victimizing, injuring, and at times killing peaceful protesters like Jawaher.

Kershner also ignored the type and origin of the dangerous tear gas used. Called CS, it's supplied by the Defense Technology Corporation of America, and may either be fired randomly into crowds, homes, or aimed directly at targets at close range, increasing the possibility of serious injury or death. In fact, a few days before she died, a CS canister blow to the chest killed Bassem Abu Rahmah, and Jawaher's brother, Basem, was killed the same way in April 2009.

US television news ignores these crimes, and rarely ever do even distorted accounts appear in print. When they do, however, they're never fully accurate or candid. Kershner, like other US reporters, highlights Israel's version of events, never hinting that regular outrageous crimes occur, that Israel's occupation and Separation Wall are illegal, and that since June 2007 over 1.5 million Gazans are suffocating under siege.

Moreover, most important is what's omitted in reports, especially background information on this decades-long conflict, why it continues, and that Washington supplies Israel with billions of dollars annually, the latest weapons and technology, interest-free loans, and virtually anything else Israel requests, even when doing so harms US interests.

One Palestinian CS survivor described the experience as feeling "like a million blue shards of glass tearing at your alveoli (air sacks in lungs) and shredding your eyes...Every breath tears at your insides; vicious animals live in your lungs. I'd rather not breathe than take one more anguished, searing, charred breath. Then, you don't have a choice; you can't breathe."

Kershner omitted those and other facts from her articles or that weapons this dangerous should be prohibited. All high-velocity projectiles also, what killed Bassem Abu Rahmen and others, fired directly at them at point blank range with intent to seriously injure or kill. Terror weapons, they're regularly used against nonviolent protesters to disperse, intimidate, and/or willfully cause harm.

"....Israeli military officials, who insisted on anonymity (always a red flag) while their investigation (read whitewash) was continuing, told various journalists and bloggers that they had never heard of tear gas killing anyone in the open, and raised the possibility that (Jawaher) had some pre-existing ailment, that alone or compounded by the tear gas, caused her death."

Jawaher, in fact, was fine. She was at work the previous day, and her brother, Samir, said she was happily looking forward to spending time with her family over New Year's. Moreover, hospital records confirmed "no history of chronic disease." Recent medical tests also showed everything was normal.

The Ramallah hospital treating Jawaher reported "her death was caused by respiratory failure resulting from the inhalation of tear gas....In recent years, a number of studies have cast doubts about (CS) gas; there have been reports of several deaths caused by" inhaling it.

"One of the main factors influencing the extent of (its) damage....is the amount of particles in the air," according to Israeli Dr. Daniel Argo "who regularly takes part" in anti-Wall protests. "He also trains activists to (treat) injuries caused by police and soldiers using crowd-dispersal techniques."

Argo explained that CS is known to cause eye and lung injuries, as well as skin diseases, saying:

"There are other types of tear gas that are not as dangerous as CS; why the defense establishment insists on continuing it use is not clear. In addition, since no studies have (addressed its) long-term effects, security personnel who use it frequently should be worried about their own health."

Protest participants say Israel uses "barrages of tear gas both in front and behind" them, trapping them. Moreover, the gas remains effective even when no longer visible. It's also used beyond its expiration date to increase its deadliness. Whenever deaths or serious injuries result, Israel denies responsibility, blaming peaceful protesters for provoking violence, when, in fact, thuggish police, military or other security forces alone are to blame.

The Legal Right to Protest Peacefully

Tear gas killed Jawaher, her brother Bassem, and her "third brother, Ashraf, was caught on camera as he was shot by Israeli soldiers while he was handcuffed." Yet, peaceful protests "are entirely legitimate. (Palestinians) have the right to protest (occupation and) the theft of their land for the giant settlements," pockmarking the West Bank as well as the illegal Separation Wall.

Jawaher "died in vain. She didn't endanger anyone. There's no need to mention the countries where the regimes kill people who demonstrate against them. Israel must not become one of them."

Israel, of course, has been one for decades, Palestinian sources confirming 21 West Bank protesters killed since 2005, besides thousands more over Israel's decades long reign of terror - information Kershner and other US journalists won't report.

Nor that in 2004, the IDF Medical Corps published a study on CS gas in the Israeli medical journal Refuah and the Germany-based Archives of Toxicology. It concluded that high gas concentrations can cause serious harm or kill. Yet in Bil'in and other villages, Israeli military forces routinely fire multiple canisters into small areas, releasing thick clouds of gas. The clear motive isn't just crowd control.

On January 8, Stop the Wall.org headlined "Hundreds march in memory of Jawaher," saying:

"Hundreds of Palestinian and international activists, members of Palestinian women's institutions and unions, and Palestinian political officials and leaders joined in the protest in Bil'in this week to honor Jawaher Abu Rahmah" who died New Year's day in a Ramallah hospital from CS gas inhalation.

"the Occupation is bringing down on us what was practiced against the Jews by the Nazis, using all its deadly weapons to exterminate the Palestinian people."

Nabi Saleh protests were also viciously attacked, including by tear gassing nearby homes. Mahmoud Samir Shehada's house was filled with gas, suffocating everyone inside. His wife collapsed and was rushed to Ramallah hospital for treatment.

Al Ma'sara residents protested Jawaher's killing despite Israeli soldiers kicking and beating them with rifle butts. In Ni'lin, residents commemorated the second anniversary of Arafat and Mohammed Khawaja's deaths, killed during Cast Lead, as well as Jawaher, in their weekly march.

2 Comments in Response to Daily Israeli Crimes Against Humanity

From my email to stephen lendman re "using all its deadly weapons to exterminate the Palestinian people."" Can you produce any evidence that "Palestinian people" existed before 1945? I realise that there was an area called palestine that has existed for a few thousand years going back to the era of the philistines. But I see no evidence of Palestinians existing as some separate and distinct arab subculture. Well other than in Jordan, and we know how that turned out. Do you have any idea why the jews focus on those in Gaza, and not those in the west bank? Well, apart from the fact that those in Gaza insist on committing almost all of their available resources to attacking Israeli civilians. Finally, since hamas claims to love death, and apparently a large number if not most or all those who chose hamas to lead them share this view, and think their children could do nothing greater than to martyr themselves, what exactly is the problem here? The people who chose hamas want to die, and the Israelis often oblige them

How many barrels of oil did this propaganda piece cost the Arabs? :)

Like all of Lendman's agitprop, the microscope is turned on Israel with strained interpretations, while the telescope is turned off the Muslim world which has no business forcing Arabs at it in the first place and can easily resettle them all far away to create a permanent peace. His same BS could be used to delegitimize the U.S. because it has troops on the US-Mexico border and mistakenly kills a Mexican it thought was a drug cartel gunman. All police actions are subject to mistakes, so what? That doesn't delegitimize the entire country.

It's not the Jews but the Muslims who crank out hate-filled jihadist propaganda almost daily calling for the extermination of the Jewish state of Israel and replacement by Muslim rule under horrible Sharia. Never do Muslims call on fellow Muslims to give up, leave the region and ask their Arab brothers to help them resettle and just leave poor Israel alone. No, it's Allahu Akbar, we Muslims love death more than you infidels love life, blah blah blah. Israel is our only real friend in that outpost in the Muslim world, and it's our canary in the mine, because if it goes we will be next. Study Islam's history free with the Historyscoper and see how the tiger can't change its stripes with modern PC talk: http://go.to/islamhistory

Read the Historyscoper's Islam Watch Blog to keep up with daily global news from all sources free: http://tinyurl.com/islamwatch