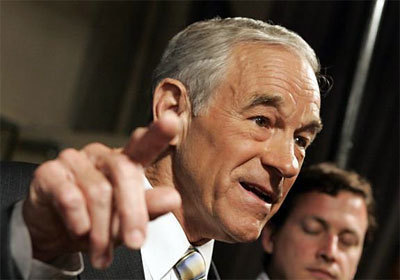 Last week, the 112th Congress was sworn in. I am pleased that I will be chairing the Monetary Policy Subcommittee of the Financial Services Committee which has oversight of the Federal Reserve. Obviously, this position will facilitate my efforts to ensure the Fed provides the American people with more information about what they have been doing with and to our money.

Not surprisingly, since my chairmanship was announced, apologists for the Fed have been recycling the old canard about how increased transparency threatens the Fed's so-called political independence. By 'independence' they are referring to the Fed's ability to greatly impact the economy with virtually no meaningful oversight. We only recently learned that the bankers at the Fed were able to use the latest financial crisis to bail out Wall Street cronies and foreign central banks with billions of dollars that were created and wasted instead of appropriated and voted on by representatives of the people. The Fed and its supporters in the Congress vehemently fought even this small bit of transparency and without this one-time provision in the Financial Reform Act forcing disclosure we would still not have this information.

Indeed, we are in the dark on so much of what the Fed has done. This is extremely dangerous for our country, yet this power and secrecy is defended as some kind of public good, which is patently ridiculous. Our government is based on a system of checks and balances. With no check on the Fed, it is no surprise it has thrown the economy wildly off-balance. The solution is not to reinflate the bubbles the Fed created or to continue to devalue the currency or to throw billions at failing banks and corporations. The solution is to return sanity and freedom to monetary policy. Forcing the entire country to use a medium of exchange that is subject to the whims of elite bankers and their cronies on Wall Street is not sanity. Hoping that an unchecked all-powerful behemoth banking cartel will solve any economic problem is not sanity.

The problems the Fed was originally created to solve now look miniscule compared to the problems it has created. If political independence erodes the purchasing power of the currency
by 98%, destabilizes the economy with radical booms and busts, all while increasing unemployment and tipping us ever closer to hyperinflation, perhaps it is time to try a little transparency and accountability instead. Better still, we should try goving the people true economic freedom.

Make no mistake, the Fed is not truly independent of political pressure. Its chair is appointed by the president and it is a creature of Congress. Congress has a duty, albeit a neglected one, to exercise oversight of the Fed. However, even if it was politicially independent, it is not independent of the influence of Wall Street. One only has to look at the revolving door between the Fed and the big banks to know that. Disclosure of TARP funds confirm this. It is nothing short of cruel and criminal for Congress to stand idly by while the life savings of Americans are inflated away to nothing. It is high time Congress insists on getting complete information on what the Fed has been doing and for whom.

My hope is that exposing the truth will demonstrate the insanity of the status quo and more people will call for sensible changes, such as legalizing competing currencies.