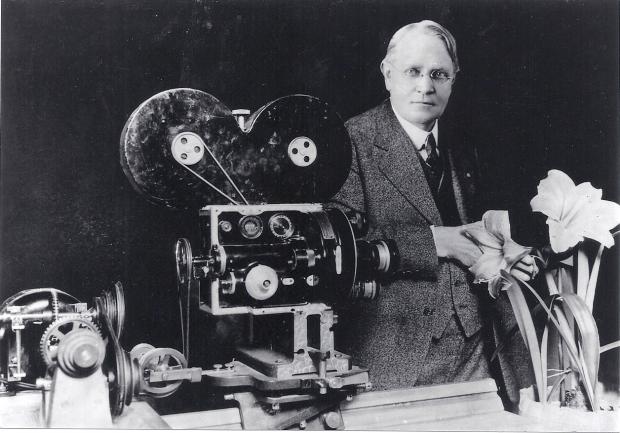 Extending Human Vision was Arthur C. Pillsbury's mission as he made and showed the first nature movies on the porch of his studio in Yosemite in 1909. The remainder of his life was spent providing the means for ordinary people see further into places beyond natural human vision. Refusing to patent any of these cameras, the circuit panorama, the lapse-time, the microscopic motion picture, the X-Ray Motion Picture or the Underwater Motion Picture, he left them as a source we could use.
It worked. Today we expect to see newly discovered insights through technology. What we see, we understand. We don't need theories when reality is available. The Twentieth Century has provided examples in countless ways. The further we see, the more we know and can choose for ourselves.
Pillsbury grew up seeing how people and our world were impacted by lack of the understanding which arose from systemic abuse of power and unbridled greed. The descendant of families dedicated to enacting social justice, Pillsbury was directly aware of both where there had been progress and of those areas needing change.
As a small boy he attended the graduation of his mother, Dr. Harriet Foster Pillsbury, from the Women's Infirmary of New York in 1880. A feminist, he lived in a world hostile to women. He visited the family homestead in Sandown, New Hampshire, where his grandfather, Benjamin L. Pillsbury and his wife, Mary Sargent Pillsbury, ran the first coeducational high school in their part of New Hampshire and provided a stop on the Underground Railroad. He grew up reading the works of Emerson and Thoreau, who were friends of his grandparents.
After the family moved in California in 1883 He witnessed the ongoing destruction of California's environment and, during college, the lack of innovation and objective thinking in an academia too often funded by the greedy who held the power of gate keeping, constricting and directing our future.
During the San Francisco Earthquake and Fire he bore witness to the devastation accompanying corrupt government as people died through abuse of the power. He recorded the imperial direction of American policy with the White Fleet in 1908 and watched as corporate interests began directly using government to achieve their ends as they used rhetoric designed to evoke trust in the vast majority of Americans who failed to see the bigger picture.
What we see today has deep roots in time.
Pillsbury believed seeing was the road to community, respect for the individual, and freedom.
What could one man do to turn back the rising tide of greed? He called it the Knowledge Commons. Today we say, Open Source. Knowledge shared enriches all of us. When we can see other people, and all other forms of life, we empathize, sensing our essential sameness, and are moved to love and protect.
Extending Human Vision, a short video less than six minutes in length, is his story, not all of it, but a beginning. Please take a few minutes and watch it.

The Right and Duty of The People?

From Status to Merit and Back to Status

My Favorite Period in History

FBI COINTELPRO Is Back, And Worse Than Ever