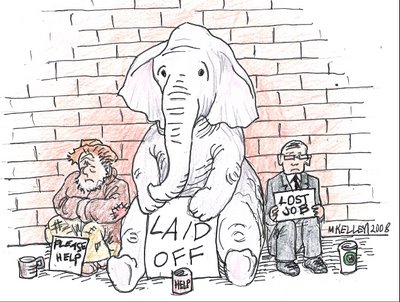 With America's worst budget crisis per capita, Illinois reflects the crushing nationwide burden facing most states. As a result since 2008, they raised taxes, made big cuts in health care (including Medicaid), education and other social services. They also laid off thousands of state workers, cut pay and benefits for others, and plan more of the same going forward.

Collectively in FY 2011, state governments face about a $140 billion deficit, besides major shortfalls in large and small cities. In fact, according to Nick Johnson of the Center on Budget and Policy Priorities, this year "will actually be the most difficult budget year for states ever," and 2012 may be as or more challenging.

Moreover, unlike 2010, little or no federal aid is planned with Washington in discretionary spending austerity mode. It means states and working Americans will largely be on their own to cope.

Accordingly, he announced no tax increase for the wealthy and will let a so-called temporary "millionaire's tax" surcharge on $200,000 a year or more earners expire, depriving the state of $1 billion annually.

"the state's fiscal disaster is even worse than commonly believed, will take years or even decades to remedy and can be fixed only by large and fundamental changes in both spending and tax policies...."

With spending exceeding revenues, and obligations not postponed, unpaid bills are growing "at a frightening rate. For instance, IGPA's Fiscal Futures Model indicates (they) could reach $40 billion by July 1, 2013, with an associated delay in paying those bills of more than five years."

Besides its $13 billion deficit and $6 billion in unpaid bills, its pension fund is about $130 billion in the red - a red flag that state workers may lose out altogether, wiping out their promised retirement savings. Overall, achieving a balanced 2012 budget requires one or a combination of three alternatives, including:

-- enormous increases in personal and corporate taxes to 7.1% and 11.3% respectively;

-- cutting spending across the board by 26%, exclusive of debt service, pensions and transportation.

Moreover, IGPA concludes that state fiscal problems "are so enormous that no single tactic will be enough to balance the budget....We start so out of balance that even an absolute freeze on all spending will not achieve balance (over) a 10-year time horizon. Bringing Illinois to fiscal solvency will require state government to implement multiple and massive policy changes. If nothing is done soon, (Illinois) faces a very bleak future."

In fact, for working households, it already does, as they may feel pain for decades, including higher (private and public) unemployment or underemployment because of disastrous federal and state policies.

With no Republican support, House and Senate Democrats (on the last legislative day before newly elected lawmakers take over) passed a major income tax increase, "rais(ing) the personal (rate) by 67 percent and the business (rate) by 46 percent."

Tax changes were effective retroactively to January 1 and will raise an estimated $6.5 billion in 12 months, way short of what's needed, and estimates have a way of not being met. In addition, the new law plans:

Running for reelection, Quinn campaigned on a smaller income tax increase - a promise made and broken the way Washington does it repeatedly, including Obama who broke every major promise he made, literally thumbing his nose at constituents by governing irresponsibly. Illinois is run the same way under Democrats or Republicans, why the state is virtually insolvent.

"Illinois appears to meet classic definitions of insolvency: Its liabilities far exceed its assets, and it's not generating enough cash to pay its bills."

According to IGPA senior fellow Jim Nowlan, Illinois is "close to de facto bankruptcy, if not de jure bankruptcy."

"We would like all the stakeholders of Illinois to recognize how close the state is to bankruptcy or insolvency."

According to legal experts, federal bankruptcy code protections apply only to cities and counties, not states. Nonetheless, even new tax revenues may not satisfy obligations, making some form of fiscal collapse inevitable. Moreover, as unpaid bills accumulate, venders may stop dealing with the state and investors won't buy Illinois bonds.

According to University of Illinois/Chicago Economics Professor David Merriman,:

"The crisis will come when you see state institutions shutting down because they can't pay their employees" or bills.

Rising pension payments are another factor pushing Illinois over the edge. One report warned that:

"the radical cost-cutting and huge tax increases necessary to pay all (its) deferred costs from the past would become so large that many businesses and individuals would be driven out of Illinois, thereby magnifying the vicious cycle of contracting state services, increasing taxes, and loss of the state's tax base."

Although Illinois' Constitution protects vested pension benefits, paying them depends on resources to do it. According to the Civic Federation:

Evidence suggests "that a judge could find the state insolvent. (If so) under the classical cash-flow definition of insolvency, which is 'the inability to pay debts as they come due,' it is not only the pension rights of non-vested employees that will be in jeopardy. All the obligations of the state, whether vested or not, will be competing for funding with the other essential responsibilities of state government. Even vested pension rights are jeopardized when a government is (declared) insolvent."

Looking ahead, the Obama administration and 112th Congress plan no federal state bailouts ahead. Moreover, Fed chairman Bernanke said "We have no expectation or intention to get involved in state and local finance," and according to Rep. Paul Ryan (R. WI):

"If we bail out one state, then all of the debt of all of the states are almost explicitly on the books of the federal government," already drowning in its own.

Yet the combined shortfall of all states equals about one-tenth of all defense spending (including supplemental add-ons, black budgets, debt service, veterans benefits, and other expenses). Moreover, it's one-fifth of the initial $700 billion TARP bank bailout, and a miniscule percent of the estimated $13 trillion + given rogue banksters.

In its final hours, Illinois' legislature delivered good news with its lump of coal, both Houses voting to end capital punishment, yet Gov. Quinn earlier said he supports it "when applied carefully and fairly."

In 2000, Gov. George Ryan saved 163 men and four women on death row after 13 there were found innocent and released. As a result, he declared a moratorium on future executions, a measure Quinn supported at the time. If he signs the new legislation, Illinois will join 15 other states and the District of Columbia (including New York, New Jersey, Minnesota, Massachusetts) without capital punishment, what should have been abolished federally long ago.