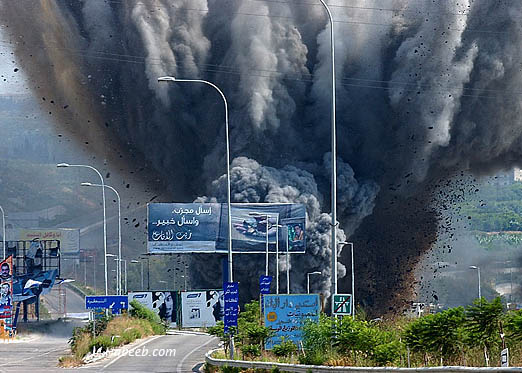 Turmoil in Lebanon - by Stephen Lendman

Reportedly, 19th century Mexican dictator Porfirio Diaz once remarked: "Poor Mexico, So far from God, So close to the United States." His proximity comment applies to Lebanon. Bordering Israel, it experienced decades of belligerent interventions as early as 1954 when Israeli Prime Minister David Ben-Gurion proposed supporting the establishment of a Maronite-dominated Christian mini-state.

In 1978, Israel attacked Lebanon and occupied the country up to the Litani River before withdrawing under US pressure, letting UN Blue Helmets (UNIFIL) replace its own forces.

On June 6, 1982, Israel invaded Lebanon, slaughtering around 18,000 Palestinians, then occupied South Lebanon until withdrawing in May 2000. It still illegally holds Sheba Farms, the 14-square mile water-rich land near Syria's Golan, also illegally occupied since 1967 as well as Ghajar, a Lebanese village bordering Golan.

In July 2006, Israel again attacked, killing over 1,000, injuring thousands more, displacing about one-fourth of the country's four million people, besides inflicting the same mass destruction it did to Gaza during Cast Lead.

Later in 1993, Israel launched a week-long offensive against Hezbollah, allegedly in response to rockets launched against an Israeli village. During the operation, heavy Israeli bombing caused massive destruction and displaced around 300,000 Lebanese. It was a prelude to a similar 1996 attack, again against Hezbollah, during which up to 500,000 Lebanese were displaced.

An early 2007 American University of Beirut study documented 6,672 Israeli terrorist acts against Lebanon and Palestine alone from 1967 - 2007, plus thousands more since then.

"Poor Lebanon" indeed, its plight journalist Robert Fisk described in his book, "Pity the Nation: The Abduction of Lebanon." As Israel's northern neighbor, it's constantly under threat, especially with Hezbollah a political force, well armed to react in self-defense.

"Lebanon's unity government collapsed after the Hezbollah movement and its political allies resigned from the cabinet over arguments stemming from a UN investigation into the assassination of Rafiq al-Hariri, the former prime minister, in 2005."

On January 12, ten ministers resigned (then an 11th) after Prime Minister Saad al-Hariri (his son) reportedly refused to convene a cabinet meeting to discuss Hezbollah's expected indictment by a UN-back Special Tribunal's (STL) for the killing of his father, Rafik on February 14, 2005.

"Hezbollah remains on the US and Israel 'terrorism' list for purely political reasons and to punish the organization for its resistance to Israeli aggressions against Lebanon and (America's) plans for the region."

Expecting its members to be charged with assassinating Hariri, he accused Israel of the crime, presenting visual and audio evidence. It includes real time intercepted Israeli surveillance footage of routes he used to be able to target his motorcade, Nasrallah saying:

"We have definite information on the aerial movements of the Israeli enemy the day Hariri was murdered. Hours before....an Israeli drone was surveying the Sidon-Beirut-Junieh coastline as warplanes were flying over Beirut. This video can be acquired by any investigative commission to ensure it is correct. We are sure of this evidence, or else we would not risk showing it."

He also said an Israeli spy "confess(ed) in front of a camera that he had repeatedly tried to falsely convince Hariri that (Hezbollah) intended to assassinate him." Though not a smoking gun, this information warrants serious investigation, especially given Israel's history of similar acts, inside and outside the region.

"Logically and legally, in this stage, any new finding should be investigated by the general prosecutor. Sayyed Nasrallah submitted tangible evidence of the Israeli potential role in Hariri's assassination." It appears incriminating. "Furthermore, the previous investigations which were circulated here and there should be revised."

For decades, Israel, with US encouragement, arms and financing, pursued imperial wars, state terrorism, politically disruptive acts, and assassinations of key figures like Hariri. Incriminating Hezbollah will, in fact, divert blame from where it belongs.

The immediate trigger for dissolving the government stemmed from failure by Syria (supporting Hezbollah) and Saudi Arabia (backing the opposition) to negotiate a settlement, preventing a wrongful STL indictment. Among other concerns is using "false witness" testimonies as evidence to implicate Syria and a group four pro-Syrian Lebanese generals for Hariri's assassination. In fact, a released WikiLeaks cable quoted senior STL judge, Daniel Bellemare, admitting there's "no case" against Syria. Nor against Hezbollah.

"The other side bowed to external, especially American pressure, ignoring the advice and wishes of the Saudi and Syrian sides."

"There was an Arab effort which we dealt with positively. We even bargained on it. However, as a result of US interference and the inability of the other side to deal with it, this effort reached a deadlock."

In fact, Hezbollah is a legitimate resistance/political organization, and was part of Lebanon's government until pulling out. Moreover, in a country with no state-provided social services, it's offered an array of its own, including medical care, education, micro-finance, reconstruction after Israeli wars and frequent assaults, and other forms of charity.

In 2006, it proved a formidable force against Israel's aggression, holding its own against vaunted IDF forces, humiliated by their inability to prevail, no matter how much destruction and slaughter they inflicted.

On June 7, 2009, Lebanon held parliamentary elections. Though Hezbollah got the highest popular vote, the Hariri coalition won a majority of seats. Under the country's confessional system, they're divided equally between Christians and Muslims, even though the latter comprise two-thirds of the population, and Shiites are 40%, mostly in Hezbollah's controlled south.

America and Israel view a Hezbollah-led government a strategic threat. In 2009, conflict might have followed if it won. Both Washington and Tel Aviv back a Hariri caretaker government, and following Hezbollah's pullout, Haaretz Service, on January 13 headlined, "IDF troops on alert following collapse of Lebanon government," saying:

Forces "stationed in the north were on alert Thursday over worries that the political turmoil....might spill over into renewed violence on their shared border....A senior officer in Israel's northern command said commanders were following events....very closely for any sign Hezbollah might try to heat up the already jittery northern border to deflect attention from the political turmoil."

Hezbollah responds only to Israeli aggression. It remains to be seen if IDF provocations follow. It's likely if Hezbollah wrests control. However, Lebanon's Daily Star reports Hariri's March 8 Alliance majority may name him prime minister.

A later January 15 report said he seeks dialogue as the only solution, while at the same time blaming Hezbollah and its allies for the collapse of Saudi-Syrian efforts to reach a negotiated solution.

The Daily Star also reported that March 8 Alliance officials may propose their candidate for prime minister and form a new cabinet without March 14 representation. Akkar MP Hadi Hobeish, however, told March 8 factions that naming its own candidate "will take the country into another direction," suggesting a none too pleasant one.

"The efforts by the Hizbollah-led coalition to collapse the Lebanese government only demonstrate their own fear and determination to block the government's ability to conduct its business and advance the aspirations of all of the Lebanese people."

On January 14, US National Security Advisor Tom Donilon said Hezbollah's intentions have been "laid bare." It will have a hard time presenting itself as a "righteous resistance organization" if it continues trying to undermine "international efforts to find the truth."

Of course, Washington and Israel consistently block it in pursuit of their joint imperial agenda. Hezbollah and Hamas remain irritants in the way.

"Soldiers, soldiers everywhere. In the valleys, on the mountains, in the streets of Beirut. I have never seen so many soldiers....They are supposed to stop the country (from) sliding into civil war, I suppose."

As early as January 17, "the Hague tribunal of the United Nations will tell us that (Hezbollah members) killed....Rafiq Hariri." America demands it. So does France, Britain and Israel to strike another blow against its effective resistance.

Until resolved, Lebanon has no government. On January 17, President Michel Suleiman will begin formal talks to reestablish one. Fisk calls it "a frightened state," but sees no civil war. It remains to be seen what comes next Tel Aviv and Washington. War seems unlikely, but in a volatile part of the world, nothing can be discounted.

On January 13, middle East analyst As'ad AbuKhalil said he sees little hope in Lebanon for "logical conclusions: they never do." As a result, "expect another lousy compromise to emerge....The absence of a secular alternative ensures (it). We had a chance back in 1976, but (Syria) intervened and prevented the secular leftist outcome of conflict."

"But make no mistake. (Minority interests have) many advantages: the biggest one being the sheer incompetence and ineptitude (of the) Hariri" led March 14 Alliance. However, the real wild card remains what Washington and Israel may do if things don't go their way. Belligerence, not diplomacy, is their usual option. Lebanon has many scars to prove it.

1 Comments in Response to Turmoil in Lebanon

"Reportedly, 19th century Mexican dictator Porfirio Diaz once remarked: "Poor Mexico, So far from God, So close to the United States." His proximity comment applies to Lebanon. Bordering Israel, it experienced decades of belligerent interventions as early as 1954 when Israeli Prime Minister David Ben-Gurion proposed supporting the establishment of a Maronite-dominated Christian mini-state."

Duh, the Mexican people love living close to the U.S., as witnessed by the millions who braved hell to cross the border and stay despite the odds. I didn't notice millions crossing the other way to live under Diaz. :)

That misapplied analogy aside, once again Arab-oil-money-greased Sheik al-Lendman tries to turn black white and white black to get his hands on the green, this time with Lebanon, which was once a model of multiculturalism, permitting Muslims to immigrate into Beirut, the Paris of the Middle East, only to see them refuse to assimilate and tear the country apart with horrible religious civil war, with notorious horrors such as checkpoints to check IDs for Christians and summarily murder them. Israeli intervention was to stop these Allah Akbaring thugs, and we all remember what they did to the Marines barracks in Beirut. Lendman's dismissal of the U.S. and Israel as "imperialists" is like listening to a man with a paper asshole on a pot. Of course Lendman doesn't care about democracy or imperialism, he really wants Lebanon to become a pure Islamic state, along with Israel, followed by the world, so screw him and all his mendacious vomit, or better, just reverse the conclusions and save time. As Americans we will always stand against Islam and its attempts at world domination and subversion of our Constitution. The U.S. and Israel aren't "imperialists" but on the side of truth and right, fighting the evil of Islam in all its insidious forms. This goes all the way back to WWI, when the U.S. fought the freedom-hating Prussian kaiser and his freedom-hating Ottoman allies in the name of freedom and democracy and kicked their butts bigtime.