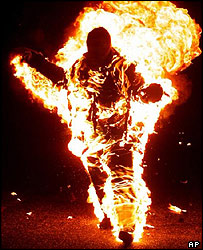 Turmoil in Tunisia - by Stephen Lendman

Protests then erupted in mid-December after Mohammed Bouazizi, an unemployed graduate working as a vegetable seller set himself on fire in front of government offices in Sidi Bouzid, protesting police confiscation of his merchandise for operating without a permit. At his January 4 funeral, marchers chanted, "Farewell, Mohammed, we will avenge you. We weep for you today. We will make those who caused your death weep."

His uncle, Mehdi Horchani, told AFP, he "gave his life to draw attention to his condition and that of his brothers." Tunisia, like Algeria and other regional countries have high unemployment, especially affecting youths, because economic conditions and structural market mandates forced cuts. Moreover, in Tunisia like elsewhere in the region, it's impossible to get decent jobs without connections or greasing palms.

Unprecedented December protests continued and spread, including in Tunis. As expected, police reacted harshly, opening fire on demonstrators, killing 18-year old Mohammed Amari in Sidi Bou Zid. At the time, Ben Ali warned on television that law and order would "be applied in all firmness to punish a minority of extremists and mercenaries who resort to violence and disorder."

In 1987, he succeeded President Habib Bourguiba, who ruled Tunisia after independence from France in 1956. A BBC obituary called him the "father of Tunisia" who led its fight against "colonial master, France." Writer Dirk Vandewalle described "Bourguibism" as a "curious mixture of political ideology and personal domination (as well as) pragmatic, opportunistic," pro-Western one-party rule. During his tenure, Tunisia was mostly peaceful.

"The demonstrations in Tunisia are refusing to stop; these have spread throughout the cities and even reached the nation's capital, in a clear challenge to the state." Despite economic hard times, he said, "Tunisia's problem is more political than economic and goes beyond the anger of the unemployed masses. This is a problem of a lack of trust in the government, and loss (of its) credibility" after 23 years of harsh rule. Economic duress lit a fuse, erupting in mass street protests against very unpopular rule.

Al Rashad observed that despite hard times, Tunisia is one of the most prosperous Arab nations based on per capital income. It's also one of the best educated. As a result, he asked, "If (Tunisians are) dissatisfied, what can we say about the citizens of other Arab nations" suffering much worse? How long will take before more eruptions?

Today, in Tunisia, the Maghreb, and across the region, public anger rages (mostly beneath the surface) over economic hardships, corruption, and repressive rule. Trying to placate it on January 13, Ben Ali told a national television audience he'd step down when his term ends in 2014.

Ben Ali fled Friday night, "capitulating after a month of mounting protests calling for an end to his 23 years of authoritarian rule. The official Saudi Arabian news agency said he arrived in the country early Saturday."

A state of emergency was declared. A curfew was imposed. The army banned street gatherings of more than three people, saying violators would be shot.

Long associated with torture, Tunisia's interior ministry is reviled. It's believed there's one policeman for every 40 Tunisians, two-thirds in plain clothes operating covertly. Prior to Ben Ali's departure, police attacked street protesters violently with tear gas grenades, live fire, and beatings while some lay on the ground,

Major reforms are needed, what Ghannouchi, his cronies, and army commanders won't countenance so repressive rule will continue unless people power intervenes.

Libya was struck against poor housing. Is Egypt next, repressively ruled for nearly 30 years by Hosni Mubarak? Outside Tunisia's Cairo embassy, protesters shouted, "Down, down with Hosni Mubarak!" "Ben Ali, you fraud! Mubarak, you fraud! Gadhaffi, you fraud!" Placards read, "Revolution in Tunis, tomorrow in Egypt." However, replacing despots with propertied elitists assures business as usual with new faces.

Business As Usual in Tunisia

Nonetheless, regional despots "are shaking in their boots (because) Tunisia wasn't meant to happen." Food price riots struck Algeria and Jordan, "(n)ot to mention scores more dead in Tunisia...." If protests erupted there, they "can happen anywhere....Arabs used to say that two-thirds of the entire Tunisian population - seven million out of 10 million, virtually the whole adult population - worked in one way or another for Mr. Ben Ali's secret police. They must have been on the streets too, then, protesting at the man we loved until last week. But don't get too excited." Expect "safe hands" to rule, serving entrenched power, not popular interests.

The Arab League urged calm, and for "all political forces, representatives of Tunisian society and officials to stand together and unite to maintain the achievements of the Tunisian people and realize national peace."

According to Germany's Deutsche Welle:

"What happened in Tunisia is a historic event and a strong signal to the entire Arab world. It shows that populations can successfully rise against authoritarian and corrupt rulers, and that 'regime change' is possible on its own - without internal or external military intervention, even without leadership from opposition politicians or civilian players" All Tunisian figures, pro and con, "have a responsibility to initiate a transparent and orderly transfer of power."

Fisk, however, is right. Unless popular eruptions prevent it, regime hard-liners will continue old policies with more bloodshed and repression to follow. Make no mistake, however. Removing an Arab despot, no matter how achieved, was historic, showing doing it may be easier than imagined.

Except for Sudan's short-lived Ja 'far Numayri ouster, aborted after 'Umar Bashir seized power a few years later, it was a first time ever regional event. It's for Tunisians and Arab street believers to shift energy to the next level, using sustained grassroots pressure for real change. With enough people power behind it, why shouldn't one success inspire others, including in Tunisia unresolved in limbo.

"With our blood and our soul, we are ready to sacrifice ourselves for the martyrs. Out with the RDC! Out with the party of the dictatorship!"

"Secretary Clinton called Tunisian Foreign Minister Kamel Morjane today to express support for the people of Tunisia as they and their government go through a period of significant transition."

Translation: Washington, like France, Britain, other Western countries and regional despots support power, not popular interests they disdain. Tunisia and other regional countries remain politically unstable as people power perhaps thinks the unthinkable - democratic revolutionary change. Why not with enough inspiration behind it!