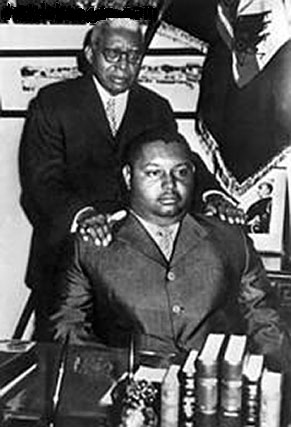 "Haitian television and radio stations reported that Mr. Duvalier....landed shortly after 6PM in Port-au-Prince," telling reporters he was there "to help Haiti."

For nearly 30 years, they reigned terror, using Tonton Macoute killers to murder up to 100,000 Haitians, yet America backed their rule. When military strongman Paul Magloire was deposed, rigged elections brought Papa Doc to power. More on his rule and son Baby Doc below.

Coups and assassinations were commonplace. Once the presidential palace was blown up, killing the incumbent. An angry mob hacked another to death. A third was poisoned. Relative stability was rare. America withheld recognition until 1862, during the Civil War under Lincoln.

Except briefly after their successful 1804 revolution and under Aristide, Haitians suffered over 500 years of persecution. It continues today under Washington-controlled UN paramilitary occupation, US marines always close by to invade.

A practicing physician, he abandoned Hippocratic Oath do no harm principles as dictator. Quickly solidifying power, he disappeared opponents, dispatching many to Fort Dimanche to be tortured to death. Others were arrested on spurious charges, including journalists, editors, radio station owners, and allies to prevent challenges to his iron grip. In 1961, he won a sham election, discarded Haiti's bicameral parliament for a unicameral one, and in 1964 declared himself president for life.

He ran the military by discarding commanders for others he controlled. He established the Presidential Guard and Volunteers for National Security (the Tonton Macoutes Palace Guard) to solidify power and reign terror through murder, torture and intimidation.

He stole government funds and extorted rake-offs from Haitian and foreign businessmen alike, enriching himself and close supporters. He rewrote the Constitution to assure Baby Doc succeeded him. Haitian elites approved to continue Duvalierism under a 19-year old when he took over in 1971.

During his rule, Papa Doc increased poverty, making Haiti the region's poorest, its present status. As president, Baby Doc continued his father's ways after initially deferring to his mother. He waged war on Haiti's poor, ruled brutally with dictatorial harshness, and amassed wealth the old-fashioned way like his father - he stole and extorted it, including massive amounts of US and international aid, notably from the World Bank, IMF, International Development Bank (IDB), and USAID.

Until deposed in 1986, he ruled repressively and institutionalized deeper poverty and corruption than his father, who established unprecedented levels under his rule.

When forced out, the Reagan administration airlifted him to a lavish French villa where he remained until returning. Why he left and why Washington let him back remain unanswered questions. Rene Preval didn't comment. Haiti Truth reported an unconfirmed rumor that he resigned, and said Duvalier plans to return to France in a week.

AP said Prime Minister Jean-Max Bellerive didn't know if he has political plans but as a Haitian citizen he's "free to return home." Aristide, of course, is very much Haitian, but Washington ousted and exiled him, refusing to let him back though 90% or more of Haitians want him, the same ones despising Duvalier.

"The widespread and systematic human rights violations committed (during his rule) amount to crimes against humanity. Haiti is (obligated) to prosecute him and anyone else responsible for such crimes." Throughout his dictatorship, "systematic torture and other ill-treatment were widespread...." People disappeared or were murdered. "The Haitian authorities must break (its) cycle of impunity....Failing to bring to justice to those responsible will only lead to further human rights abuses."

He spent "his first day back in Haiti out of the public eye, huddled with his advisors and relatives" at the Karibe Hotel. "His silence left Haitians and the rest of the world to wonder what (he's) really up to."

"Angry reactions poured in from around the world, with human rights groups demanding that the Haitian government charge (him) with crimes against humanity" and massive corruption.

France and Washington denied knowing he was coming. Rubbish! For sure, they're behind it for reasons so far unknown.

Whatever's behind Duvalier's return, imagine the irony. On January 14, after ruling repressively for 23 years, people power ousted Tunisian dictator Zine El Abidine Ben Ali who fled the country to Saudi Arabia for refuge. Two days later, Baby Doc arrived. Whether to stay or leave isn't known, nor why he was let back.

Either way, longstanding Haitian suffering continues, exacerbated by post-quake conditions, raging cholera, electoral fraud, and world community indifference. Far more formidable than Duvalier, imperial Washington won't lessen it. Regaining its sovereignty is Haiti's first step to liberation, but that vision's nowhere in sight, including under Obama who's as ruthless, callous and repressive as Bush.